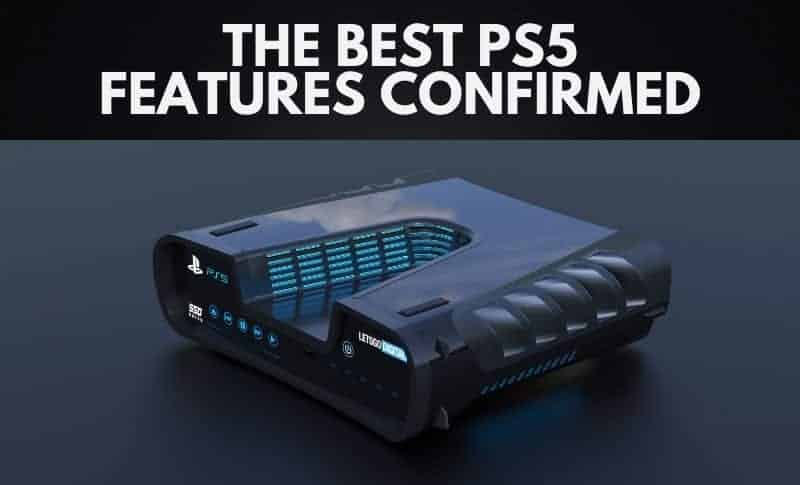 Want to know the best PS5 features that Sony have already confirmed true?

The PS5 (PlayStation 5) is set to be released at some point later this year, and we’re just itching to get our hands on it.

However, whilst we eagerly await its release, what do we know about the PS5 so far?

Well, here’s a list of the 10 PS5 features Sony has confirmed and are coming to the PlayStation 5!

The 10 PS5 Features Sony Have Confirmed

The list of PS5 features and figures mentioned below have been compiled from various sources around the web, such as  Tech Radar, Euro Gamer & Inverse.

These are the 10 PS5 features Sony have confirmed:

10. Not Just Digital Only

Sony has confirmed that the new PlayStation 5 console will support the current form of disks, and won’t be a digital-only console.

This is a smart move from Sony as many PlayStation 4 fans will appreciate this decision, as they’ll still be able to play cross-platform games from the PS4 on the new PS5 console.

A digital-only console is more likely to happen in a few more years, once the majority of games are discounted, as a lot of gamers like to purchase something physical, i.e, a game in a box, so the thought of buying a digital download only, kind of feels like you’re paying the same but getting less.

The next confirmed PS5 feature is that gamers will have a lot more freedom and flexibility when deciding what type of game modes they want to install, as it will now be fully configurable.

For example, if you’re not too bothered about instaling the single-player campaign mode featured in most games, which a lot of people aren’t, then you can skip it entirely and just install multiplayer

You can thank the new SSD for that. More information on that coming up below!

If you’re wondering whether or not you’ll be able to play last-gen games, on the Playstation 5, then worry not, as the answer’s, yes! Well, for almost all games, however, there will still be some that won’t be compatible.

Sony has been wanting to catch up with its rival, Xbox, with this feature, as Xbox included it in the Xbox One, and there’s a pretty good list of backwards compatible games for the Xbox 360 and Original Xbox, on the Xbox One.

Also, existing PlayStation VR headsets are also going to be backwards compatible with the PS5!

As we mentioned earlier, the PlayStation 5 will not just be a digital-only console as it will include a CD drive.

This leads us to believe that this was not just so gamers can play last-gen games, but also for the purpose of including 4K Blu-ray, which Sony left out of the previous PS4 Pro.

So, the optical drive that reads 100gb optical disks will now also double as a Blu-ray player on the PS5!

VR support is nothing new for Sony, as it was already included in the previous console, the PlayStation 4.

However, this time around, Sony has included not only support for the PlayStation VR headset but also the rumored PSVR 2 wireless follow-up headset!

This is a pretty big feature to be honest, as Microsoft still haven’t got a console on the market with virtual reality capabilities, not even the Xbox One!

So, if Sony can get this PS5 feature right, they’ll easily be leading the pack and dominating the VR space!

Over the years, resolution has continued to advance and provide us gamers with a continuously better user experience year on year.

With that said, Sony has confirmed 8K support as a new feature on PS5.

Now, it’s probably not the most exciting feature on the list, as not everyone will have the TV’s to support it, but for the early adopters of 8K panels in 2020, the PS5 should be able to deliver.

At the moment it looks like the PlayStation 5 will target gamers on 4k at 60 fps as the baseline of displaying their content. And, when 8K TV’s are more commonplace, you’ll be able to adjust your settings to accommodate.

The PlayStation 5 (PS5) will come with a Solid State Drive (SSD), which Sony says uses its new PCIe 4.0 connection.

This means that games will load a lot faster and you’ll be able to pull-in game assets at the fraction of the speed of the traditional HDD tech used in the PS3 and PS4.

Mark Cerny gave an example of a 0.8 second loading time compared to 15 seconds when loading a modified version of Marvel’s Spider-Man on the PS4.

In terms of the storage size, we’re not too sure on that as nothing has been confirmed as of yet.

However, we’re hoping for at least 2TB, as it will need to accommodate for digital downloads and games like Red Dead Redemption 2, that’s a minimum of 99GB.

The inclusion of an SSD is a really nice PS5 feature, allowing developers to create even bigger maps and open worlds.

When Mark Cerny says that he believes the PS5 3d Audio will be “dramatically different” to the PS4, you better believe it!

He also said that “it’s been frustrating that audio did not change much since the PS3 and PS4, and with the next console, the dream is to show how dramatically different the audio experience can be when we apply significant amounts of horsepower to it”.

The PS5 will come with a custom 3D Audio unit already built into its AMD processor.

The unit is claimed to produce a more immersive sound, which requires no additional hardware, as it will just continue to play through your normal TV speakers or headphones.

3D Audio will ensure that sound can be heard from all angles. For example, like surround sound and above and below. If they do pull this off, it will make for a more immersive gaming experience, that’s for sure!

The next PS5 feature to be confirmed by Sony is the new GPU, which has built-in ray-tracing.

The PS5 GPU will be a custom AMD Radeon Navi GPU that supports ray tracing at the hardware level.

If that means nothing to you, then perhaps knowing that some of the biggest multi-million dollar Hollywood CGI movies use it!

The new GPU will help improve the overall speed and performance of the PS5 and is one of the best PS5 features Sony have confirmed.

The number one PS5 feature Sony has confirmed is the new bespoke 8-Core AMD CPU.

The CPU is based on the third generation of AMD’s Ryzen line of processors, delivering eight cores and 7nm Zen 2 micro-architecture.

Combine this power with the GPU and ray tracing, and it’s easy to see how good the PlayStation 5 is going to be, provided everything is as it’s been confirmed!

But rest assured, the CPU has been confirmed which basically means a faster machine and more comfortable gaming experience is coming to the Playstation 5 when it’s released later this year!

We hope you enjoyed our list of the 10 PS5 features Sony have confirmed.

The PlayStation 5 is looking like it’s going to be an absolute beast, and will easily consume hours of our time at Gaming Gorilla.

The SSD and faster AMD chip alone is exciting enough to make us buy one!

Here’s a quick recap of the 10 PS5 features Sony have confirmed:

Which PS5 features are you most excited to see? Leave a comment below.