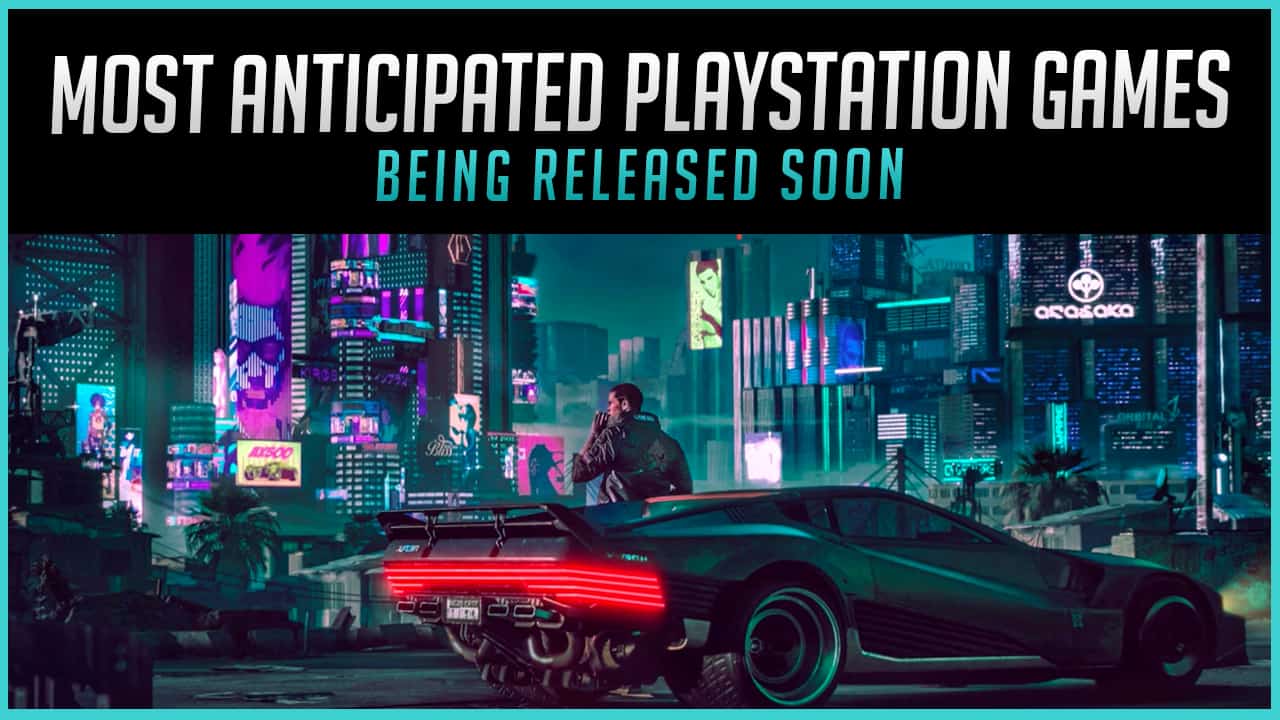 Well, if you’ve got a PlayStation 4 or you’re thinking about grabbing the new PS5 when it comes out later this year, (as it’s also rumored to be backwards compatible) then you’re going to want to make a note of the following release dates, as these games are going to be epic!

We’ve included everything from the Final Fantasy VII Remake to The Last of Us Part II.

Also, have a quick read of the best PS5 features confirmed by Sony.

So, without further ado, here’s a list of the 20 most anticipated PlayStation game releases.

The list of PlayStation games and figures mentioned below have been compiled from various sources around the web, such as Stuff, Games Radar & Pocket-Lint.

These are the 20 most anticipated PlayStation game releases: Kicking off our list of the most anticipated PlayStation game releases is Biomutant.

This upcoming action RPG is being developed by Experiment 101 and published by THQ Nordic.

The game is played in a third-person perspective and set in an open-world environment. Players take control of a raccoon playable character that’s stuck in a world full of mutated animals.

You’re able to customise the raccoon’s entire body and weaponry, which becomes almost mandatory as you progress through the game’s missions.

The official release date is yet to be confirmed but should be somewhere in late 2020. Next up is Kerbal Space Program 2.

KSP is a space flight simulation video game developed and published by Squad.

It’s hopefully coming to the PlayStation 4 at some point in 2020 and is the sequel to 2011s Kerbal Space Program.

This time around, you’ll not only be building a functioning space program but will also broaden your horizons to space colonies and more impressive vehicles and structures. Little Nightmares 2 is the eighteenth upcoming PS4 game due for release in 2020.

It’s the sequel to its older brother, 2017s Little Nightmares, and will take place six escapes from the Maw.

The game will feature a new character called Mono and the protagonist from the previous game, Six.

Together, they embark on a quest through the City to reach the Black Tower. They’ll face new bosses and difficult challenges as they progress through each mission. Minecraft Dungeons is the next most anticipated PlayStation game release.

It’s a dungeon crawler that does not feature any crafting or building, unlike Minecraft, instead, it focuses on allowing players to explore randomly-generated dungeons filled with monsters, traps, puzzles and treasure.

Players are able to wield any weapon or armor they want, and, the game will feature up to four-player local and online multiplayer. Coming in at number sixteen is the brand new first-person-shooter from V1 Interactive, Disintegration.

The game is set in a future where human minds have been implanted into cyborg bodies, on a planet that’s been drained of resources and seen better days.

Disintegration offers a single-player campaign and an online PVP multiplayer option, and, is the brainchild of Marcus Lehto, the former creative director at Bungie, and a co-creator of Halo.

The release date is to be confirmed as of yet, but it could be somewhere between 2020-2021. Skull & Bones is an action video game that’s looking likely to be released sometime after March 2021.

The game is developed by Ubisoft Singapore and published by Ubisoft for the PlayStation 4 and focuses on Piracy and Naval Warfare.

It’s a tactical game that’s set in an open-world environment.

It’s played from a third-person perspective and features a single-player campaign, where players control a pirate captain and sail the Indian Ocean, or get up to five players to join in a PVP game. Dying Light 2 is an upcoming survival horror action RPG that’s release date is yet to be confirmed.

It’s the sequel to Dying Light and starts some fifteen years after.

Set in an open-world environment, this first-person zombie-themed RPG starts with a new protagonist, Aiden Caldwell, who uses his parkour skills to outsmart braindead zombies and maneuver his way around the city.

We’re hoping Dying Light 2 will be released on the Playstation 4 at some point in 2020. Bloodlines 2 is an action role-playing video game, developed by Troika Games and published by Activision.

This time around, the game is set in Seattle and features a fledgeling thin-blood vampire, that was turned as part of a masquerade-violating mass embrace of human beings.

According to official sources, the game is scheduled for release at some point late 2020. Gods & Monsters is the next most anticipated PlayStation game release.

Developed by Ubisoft, Gods & Monsters has been created by the team behind Assassin’s Creed Odyssey, which makes us think that Gods & Monsters is going to a be a visual stunner and one hell of an immersive gaming experience.

Seeking to restore the powers that have been taken from the Greek Gods, players control a young warrior that’s gifted with abilities and skills as the game goes on.

Gods & Monsters is scheduled to be released late 2020. Watch Dogs: Legion is an upcoming action-adventure PlayStation 4 game that’s being developed by Ubisoft Toronto and published by Ubisoft.

It’s the third instalment in the Watch Dogs series and is set within an open-world fictionalised representation of London, England.

The game is playable from a third-person perspective and features the ability to control multiple characters, a single-player campaign and a co-operative multiplayer that allows up to four players to work together.

Watch Dogs: Legion was originally due to be released on March 6, 2020, however, the game has been delayed until 2021. Coming in at number ten is Rainbow Six Quarantine.

The game is set in the future and follows a playable character that must battle to stay alive, as there’s a mutated alien parasite infecting humans, causing terrible mutations and a lot of uncertainty for the future of humanity.

Players must try and work their way through unpredictable environments to complete their missions. Predator: Hunting Grounds is a PS4 exclusive, which will be published by Sony Interactive Entertainment.

It’s the officially licensed game of the Predator movie franchise and one of the most anticipated PlayStation game releases of all time.

It’s going to be an online multiplayer action shooter that will allow players the choice of playing as a member of an elite Fireteam, that are ordered to complete a number of paramilitary missions, or the “Predator” and get a chance to play with an array of deadly alien tech. The eight most anticipated PlayStation game is Overwatch 2.

This is a standalone sequel to Overwatch and will run on an upgraded version of the original game’s engine, which means players will be able to enjoy larger maps which support story-based PvE elements.

The official release date for Overwatch 2 is unclear, however, Kaplan, the games developers, said that they’re much more concerned with the quality of the game instead of getting it out as quickly as possible.

This is a good sign of things to come, and we think Overwatch 2 will be awesome when it’s released. This third-person shooter is being developed by People Can Fly and will be published by Square Enix.

Players choose a custom character from a choice of four at the beginning of the game, each having their own unique abilities.

Then, they can either choose to embark on a solo campaign or participate in up-to a three-player cooperative multiplayer mode.

As far as we know, the game is set to be released in late 2020 but nothing official has been confirmed. The game is being developed by Blizzard Entertainment and is the highly anticipated fourth title in the Diablo Series.

In this version, we see the daughter of Mephisto, Queen of Succubi (female demons) and the creator of the world of Sanctuary, Lilith, become the primary antagonist that players must hunt down and destroy.

If it’s anything like Reaper of Souls, the third instalment in the Diablo series, then we’re in for one hell of a treat! Coming in at number five is Marvel’s Avengers.

This 2020 upcoming PlayStation action-adventure video game is being developed by Crystal Dynamics and Eidos Montréal, and, will be published by Square Enix.

The game is based on the Marvel Comics superhero team, the Avengers, and takes place approximately five years after A-Day.

As you might expect, the superheroes come into conflict with a number of supervillains in the attempt to keep the planet safe, such as the Abomination and Taskmaster.

Marvel’s Avengers has been scheduled to be released on September 4th, 2020. The fourth most anticipated PlayStation game release is Ghost of Tsushima.

This action-adventure game is currently being developed by Sucker Punch Productions and will be published by Sony Interactive Entertainment for the PlayStation 4.

The game is played in an open-world environment and follows the story of Jin Sakai.

Jin is one of the last Samurai of Tsushima Island and faces his enemies during the first Mongol invasion of Japan.

Ghost of Tsushima is scheduled for release on June 26, 2020. Cyberpunk 2077 is an upcoming role-playing game for the PlayStation 4.

It’s will be developed and published by CD Projekt.

The game takes place in an open-world called Night City, which has six distinct regions for players to explore.

Players take control of a customisable mercenary, in first-person, and work their way through the game’s story, collecting weapons, machinery and new skills along the way. It’s being developed and published by Square Enix and is the remake of the 1997 PlayStation game, Final Fantasy VII.

In the game, players control Cloud Strife, a mercenary, as he, along with Avalanche, object against Shinra using the planet’s life essence as an energy source and do their best to put a stop to it.

Final Fantasy VII Remake is scheduled for release on the PlayStation 4 on April 10, 2020. The Last of Us Part II is the most anticipated PlayStation game release of them all.

This upcoming action-adventure game is being developed by Naughty Dog and will be published for the PlayStation 4 by Sony Interactive Entertainment.

The story is set five years after the events of The Last of Us (2013). Players control Ellie, a 19-year-old girl that mistakenly falls victim to a strange cult in the post-apocalyptic United States of America.

The game is played from a third-person perspective and players are able to use improvised weapons, firearms and stealth to defend themselves from hostile humans and cannibalistic beings tainted by a mutated strain of the Cordyceps fungus.

The Last Of Us Part II was originally scheduled to be released on May 29, 2020, however, it has been delayed until further notice for now.

We hope you enjoyed our list of the 20 most anticipated PlayStation game releases.

How impressive do these PlayStation games look?!!

We’ve also pre-ordered a few more games on the list, just to make sure we stay ahead of the curve.

Also, if you’re thinking about buying the new PlayStation 5 (PS5), check out our list of The 20 Best PS5 Games Confirmed/Rumoured for Release.

Here’s a quick recap of the 20 most anticipated PlayStation game releases.

What’s your favorite most anticipated PlayStation game release? Leave a comment below.

Matt McIntyre is a digital marketing consultant and certified marketing strategist. When he's not talking about business or marketing, you'll find him on a beach or in the gym.

The 15 Best Split-Screen Xbox One Games

What are the best split-screen Xbox One games?  Don’t get us wrong, playing online is great, but sometimes you can’t...

What are the best GameCube games of all time? Well, you’ll find everything you need to know listed below. From...