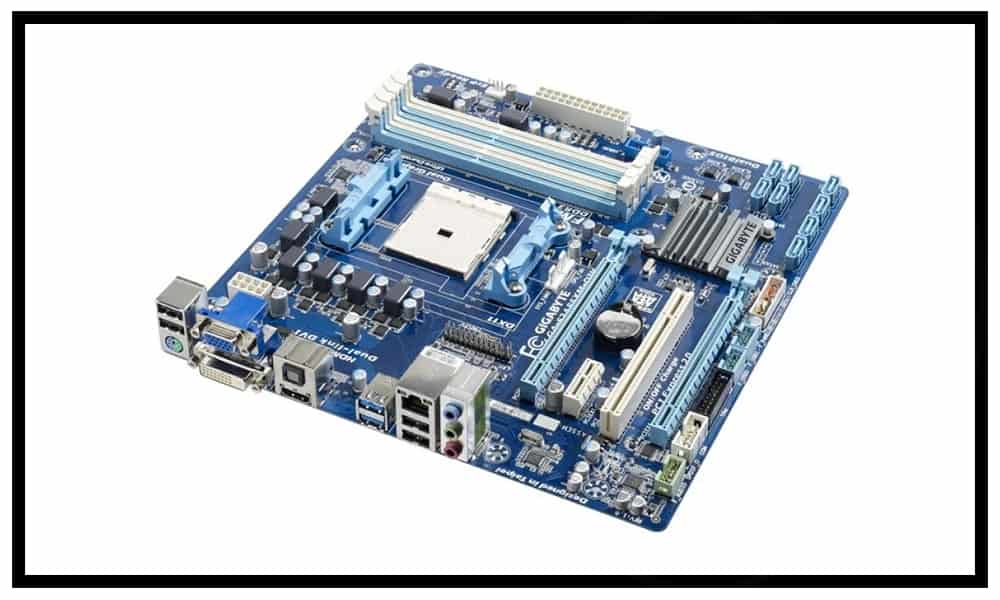 With the FM2 hitting the market at a great price point it is hard to argue the value they bring to those on a budget. From top to bottom, the APUs offers speed and GPU performance for everyone. Throw is the price of a good motherboard and the value climb continues to climb. Features like USB 3.0, SATA III, Crossfire support and in some cases decent overclocking make the A85X platform a great way to adequate gaming machine as well as the ultimate home theatre setup.

A number of companies have released a series of motherboards based around the Trinity APU. Gigabyte is one of those companies who have released eight motherboards supporting the APU but only four of them are utilizing the A85X Bridge. One of those four is the micro-ATX GA-F2A85XM-D3H which we will be reviewing here today. This new motherboard offers all that was stated in the first paragraph at a very comfortable price range for those on a building budget.

With the new AMD APU having such powerful graphic instructions built into them like the A10-5800K with its Radeon HD 7660 graphic set chances are good they may be elected to serve as a nice HTPC built as well as a standard PC. And the Gigabyte F2A85XM-D3H is a great motherboard to pair it with. It all the latest features and is mATX to fit into those smaller cases we are starting to love.

The F2A85XM-D3H is one of four motherboards from Gigabyte based on the A85X AMD chipset suited for the AMD Trinity APU processors. The F2A85XM-D3H sports Gigabyte’s traditional light blue and white on a medium blue PCB.

On the surface we can start to see what the motherboard has to offer but Gigabyte is also packing their new motherboards with technologies we often don’t look for. There are technologies embedded into the board to help against humidity as well as electrostatic and high temps. With people spending much more today on custom computers protections like this is very much appreciated. These extra preventatives are possible due to a new glass fabric PCB and high quality caps and ICs.

For power to the CPU and CPU’s integrated memory controller the F2A85XM-D3H uses a 4+2 phase configuration, slightly down from the 6+2 layout of the higher F2A85X-UP4. But still should allow for a decent overclock and still provide clean stable power.

The surface around the CPU socket is clear of anything and that means heat sinks as well. So depending on memory used pretty much all coolers should have no problem being mounted.

The EPS 8-pin sits behind the wall of VRM across from the back of the I/O panel. And there are a total of three fan headers with all of them being of the 4-pin variation.

Naively, the APUs for this socket has a DDR3 support of frequencies up to 1866 MHz and this is the highest the motherboard also list. But if you are using memory that uses AMD’s AMP no problem for this motherboard as it is accepted. The F2A85XM-D3H supports up to 64 GB of total ram.

Crossfire technology can be had via the x16 and x14 PCIe slots. There are also ax1 PCIe and a standard PCI. The CMOS battery sits between the longer x16 and PCI slots.

The eight very plentiful SATA 6 Gb/s ports sit down in the lower corner of the motherboard. All the port elevate up and not at the desired 90 degrees. This may or may not cause an issue if a long GPU is uses in the x4 PCIe slot. The ports support RAID 0, 1, 5, 10 and JBOD.

Above the SATA port is another disaster preventive measure and that is the dual UEFI BIOS chips. Ever mis-flash the main BIOS; you are saved by the backup BIOS that is always ready to go.

This board ready does hang onto the legacy ports quite well. Not only is there a COM port (white header) on the bottom of the motherboard and PCI slots but there is also a serial LPT port as well.

I am thinking we have hit our limits with our A10 5800K as the overclocks were the same as it was on the Asrock motherboard we tested a couple of weeks ago. In order to get to the 4.5GHz plateau, we needed just a little less voltage than before. It was 1.42v to be exact.

To get to 4.8GHz, things were a little different. We needed more voltage this time. At 1.56v we were able to get a stable solid overclock from the Gigabyte board.

Futuremark PCMark Vantage v1.0.2
3DMark Vantage is a PC benchmark suite designed to test the DirectX10 performance of your graphics card. We’ve been making 3DMark for over 10 years, with each new edition using the latest 3D technology to determine real-world performance.

SiSoftware Sandra 2011
We are pleased to announce the launch of SiSoftware Sandra 2011, the latest version of our award-winning utility, which includes remote analysis, benchmarking and diagnostic features for PCs, servers, mobile devices and networks.
At SiSoftware we strive to ensure that we give our users the best software experience. We observe the industry, try to predict where trends are going, but more than that: we also come up with new ideas on how to measure performance. SiSoftware works with all major hardware vendors to ensure we can accurately measure, report and present performance in the most accurate and informative way.
A year ago, SiSoftware released Sandra 2010 with full support for Windows 7; in the 18 months since the launch of Windows 7, more than ever before we have seen the line blur between PC and entertainment hubs. Two months ago we released a Blu-Ray benchmark, now we have added a brand-new Media Transcoding benchmark using the new Media Foundation of Windows 7. We have also added yet another benchmark (GP Cryptography) which allows direct comparison of CPU performance (using crypto instruction sets) and GPGPU/GPCPU/GPAPU performance.

Super PI Modded 1.5
In August 1995, the calculation of pi up to 4,294,960,000 decimal digits was succeeded by using a supercomputer at the University of Tokyo. The program was written by D.Takahashi in collaboration with Dr.Y.Kanada at the computer center. This record should be the current world record. (Details are shown in the windows help.) This record-breaking program was ported to personal computer environment such as Windows NT and Windows 95. In order to calculate 33.55 million digits, it takes within 3 days with a Pentium 90 MHz, 40 MB main memory and 340 MB available storage.

Geekbench 2.3.1
Geekbench provides a comprehensive set of benchmarks engineered to quickly and accurately measure processor and memory performance. Designed to make benchmarks easy to run and easy to understand, Geekbench takes the guesswork out of producing robust and reliable benchmark results.

Cinebench 11.5
CINEBENCH is a real-world cross platform test suite that evaluates your computer’s performance capabilities. CINEBENCH is based on MAXON’s award-winning animation software CINEMA 4D, which is used extensively by studios and production houses worldwide for 3D content creation. MAXON software has been used in blockbuster movies such as Spider-Man, Star Wars, The Chronicles of Narnia and many more.

TechARP X264 HD V5.0.1
x264 HD Benchmark is a benchmark that allows you to measure how fast your PC can encode a 1080p video clip into a high quality x264 video file. It allows for an easy comparison because everyone running it will use the same video clip and software. The x264 video encoder has a fairly accurate internal benchmark (in frames per second) for each pass of the video encode and it also uses multi-core processors very efficiently. All these factors make the x264 HD Benchmark an ideal tool in comparing the video encoding performance of different processors and systems.

Futuremark 3DMark 11 v1.0.3
3DMark 11 is a DirectX 11 video card benchmark test for Windows that is designed to measure your PC’s gaming performance. 3DMark 11 makes extensive use of DirectX 11 features including tessellation, compute shaders and multi-threading. Trusted by gamers worldwide to give accurate and unbiased results, 3DMark 11 is the best way to consistently and reliably test DirectX 11 under game-like loads.

Unigine Heaven 3.0
Heaven Benchmark is a DirectX 11 GPU benchmark based on advanced UNIGINE™ engine. It reveals the enchanting magic of floating islands with a tiny village hidden in the cloudy skies. Interactive mode provides emerging experience of exploring the intricate world of steampunk.

Flying Wild Hog Hard Reset
The world as we know it ceased to exist. Humanity is at the verge of extinction, living in the last closed city of Bezoar. Mankind wages war against the machines controlling vast areas of what became the ‘Barrens’. Machines want to control and assimilate ‘The Sanctuary’ a network that holds billions of digitalized human minds. Our hero, Maj. Fletcher, is a soldier of CLN – a corporation combat unit, established to protect the city. Machines are constantly assaulting the walls of Bezoar. Fletcher moves in when Bezoar’s protective barrier is breached.

For a mATX motherboard, the Gigabyte FM2A85XM-D3H is a very nice motherboard for all intents and purposes. It’s built very well and performs even better. We tested the board against another FM2 socket board and the numbers were not even close. Actually, they were so far apart that we had to place the other board back on the bench just to make sure.

What I really like about the FM2A85XM-D3H is its placement. Mated with a processor like the A10-5800K, the two will make a decent gaming machine with a decent GPU is also added to the mix. But if you do decide to build HTPC using the two pieces you will not have to worry much about any upgrades for a fair amount of time. The two have proved via benchmarking and actually usage they can accomplish whatever it needs for a great visual experience.

A large and very important part of the performance of this motherboard is in part to the 7660D graphics in the APU. With such graphics watching of digital video material was enjoyable to say the least. Gaming is decent just as long as it is not too graphic intensive. But there is a remedy for that if the game requires more GPU horsepower. Add in a 6 series Radeon card like a 6670, instant justification. The graphics of the APU and the extra power of the discrete GPU will form a hybrid Crossfire solution that should take care of most of your gaming needs.

And if you are looking for the pair to overclock, you will not be disappointed. We achieved a max of 4.8GHz using a decent amount of voltage to the point where we did not feel bad about running it 24/7. And if you are not a fan of 1.5 or more voltage to the CPU voltage a modest 1.4 or so netted us another 600MHz with a problem.

There isn’t much to dislike about the Gigabyte motherboard. But if we had to nitpick we would say we wished it was black like their higher-end boards.

At about $90, the FM2A85XM-D3H is a great buy considering all that you get as far as built-in features.