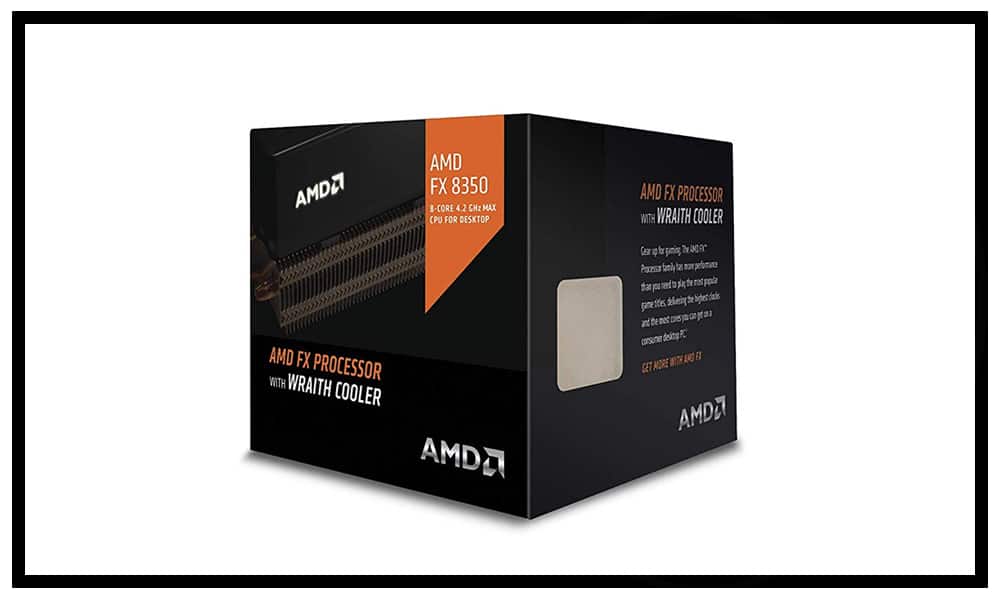 The AMD FX-8350 processor is a mid-level 8-core 125W processor from AMD. Designed to offer a both ‘tall and wide’ performance, it features 8 cores and turbo boost. Being 8 cores wide will benefit multi-threaded applications like media encoding, traditional ray-trace renderers, home video and photo editing, and multi-threaded low-level API’s like DirectX 12 and AMD Mantle. The turbo boost offers more performance for applications using older APIs, smartly using the TDP limit of the processor to increase throughput via increasing clock speed.

Like all AMD FX processors, the platform configuration speeds are unlocked for voltage and frequency adjustment offering tunability for any use case – end users can tweak the performance/clockspeed/boost/voltages to suit their needs, be it a quiet PC or a fast-as-it-can-go benchmark system.

The Bulldozer FX series CPU’s have been with for some time now. Updates to the FX series were brought to us with the release of the Vishera architecture. That was in late 2012. Since then the series has been expanded to offer greater variety and prices have dropped, but nothing much else changed. That was until just recently when AMD started packaging new coolers with select processors. Depending on which processor you purchase, you may get the new Near-Silent 95W Cooler, the new Near-Silent Cooler, or what we are looking at today; the new Wraith Cooler.

The Wraith Cooler promises better performance and quieter operation over the previous cooler. AMD’s previous cooler packaged with the 125w processors leaved a bit to be desired. It was the loud side and overclocking headroom was minimal. If AMD’s new Wraith cooler makes any improvements over that, it will be a welcome addition to anyone purchasing a CPU packed with it.

AMD’s take on the FX Series

An Industry Leader in Price for the Performance

AMD’s take on the Wraith Cooler

AMD offers premium thermal solutions for people who care about the way their PCs run, sound, and look.

We’ve listened to our customer feedback and designed our newest coolers to deliver near-silent operation, bolstered with capable thermal hardware – with no increase in pricing when these new coolers have been added to existing processors – for a tremendous value.

Featuring near-silent 39dbA operation, the AMD Wraith Cooler is practically inaudible when installed in your PC.1,2 That’s less than one-tenth the noise of its predecessor, but with impressive thermal performance thanks to 24% more cooling surface fin area and 34% more fan airflow.3,5 Backlit illumination and an attractive fan shroud makes the Wraith Cooler an impressive piece of hardware that every PC enthusiast can be proud to show in their system, available now and bundled exclusively with processors like the AMD FX™ 8370, FX™ 8350, FX™ 6350, and A10-7890K APU.

When results are all that matter: the Near-Silent AMD 125W AMD Thermal Solution features the AMD Wraith Cooler’s near-silent operation and capable thermal performance, without the illuminated shroud.2,4 This powerful cooling hardware can be found on both the AMD Athlon™ X4 880K and the proven A10-7870K processors.

Up next, the specifications and packaging.