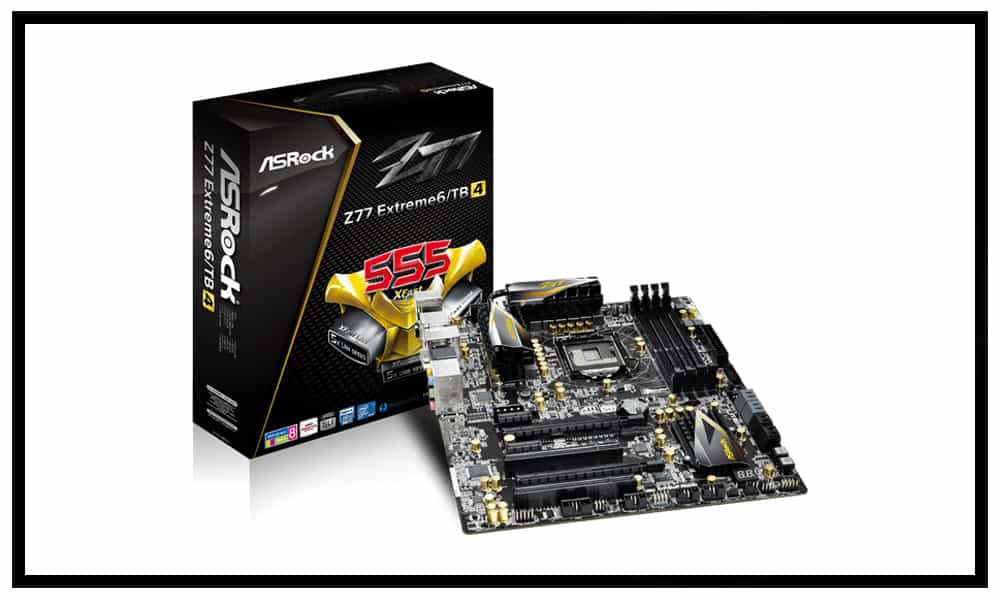 Asrock wants to remain in the mouths of buyers after the successful release of the X79 Extreme9. And in order to do that they would have to put out another great board. And we do believe they have done so with the upcoming Z77 Extreme6. Looking at it for the first time all I could think about was the X79. An awesome-looking motherboard with features galore. But with all the new motherboards being released is this a keeper? We will see.

Well, the time has come. It is like Christmas time for many. Santa has delivered a brand new toy. In this case, it is Christmas in April. Santa is Intel. And the elves are every motherboard manufacturer on the planet. The gifts contain motherboards with the brand new Panther Point Z77 chipset. Definitely just what the kiddies have been waiting for.

The new chipset brings new features and vast improvements to others. One of the featured improvements would be to the PCIe lanes as the new chipset has been upgraded to PCIe 3.0 compliances and speeds. But we are still limited to just sixteen of them. There are many more attributes we will talk about but figured I will just hit you with one for now.

Right off the bat Asrock is offering seven motherboards based off the Z77 chipset. Three under the Fatal1ty branding Pro, Pro-M and Performance, three within the Extreme series (6, 4 and 4-M) and a Pro-M. M in the title reflects the motherboard is mATX in size.

We will be taking a look at the Extreme6 which is looking to be the overclocking favorite of the series. And just like the Extreme9 we reviewed it also shared the new look in heat sinks, several PCIe 16x slots and a host of other features like gold Japanese caps and a power phase setup for good overclocks.

First of all, we are delighted to tell you that the Z77 does support the current Sandy Bridge processors i.e. 2700K, 2600K and so on down the line. But it also supports the soon to be here Ivy Bridge processors which we cannot discuss as of now. For those sitting on the P67 and Z68 chipsets may find it hard to upgrade to the Z77. Many may not find the new or updated featured worth the time and effect.

If you feel that you own a good enough cooler from your socket 775 days then you are in luck. Just like on the P67 and Z68 motherboards Asrock allows for a easy transaction to the new motherboard which will accommodate your older cooler. Asrock calls this feature Combo Cooler Option or C.C.O.

Look any great motherboard the PCIe slots are plentiful. And it has to be in order to be considered a gamers’ dream.  There are a lot of three of them on the Extreme6. When a single GPU is used you are blessed with a full x16 bandwidth. Once a second card is introduced the bandwidth becomes x8/x8. The last slot operated from the chipset at x4. Both SLI and Crossfire setups are supported.

Between the two top PCIe slots is an mSATA connector. This connector can be used for several different devices but we see it being used more for an mSATA connected solid state drive. And with that being said the user can take advantage of the cache feature of the chipset.

Just like the Z68 chipset, the Z77 only supports two SATA III and four SATA II ports. And additional ports will be motored along from a separate controller. The third and forth SATA III ports on the Extreme6 are supported by an ASMedia ASM1061 controller. Only the Intel-based ports support RAID in any form.

The Extreme6 supports 32GB through four DIMM supports. The current Sandy Bridge supports memory naively up to 1333MHz which the Ivy Bridge chips are rumored to be up to 1600MHz. The motherboard itself supports up to 2800MHz DDR3.

The Extreme uses a digital Digi Power Design phase power as they call it. The design is suppose to allow better and cleaner distribution of power to the CPU, memory and PCIe slots. The configuration is an 8+4 arrangement. This means eight phases dedicated to the CPU voltage while two are geared towards memory and the last two towards the slots of the motherboard.

The board offers an onboard power and reset switches but the CLR CMOS button is located on the rear I/O panel.

I cannot tell you just how an Ivy Bridge processor overclocks as I was not fortunate enough to receive one. And if I did I still couldn’t tell you as the official date have not arrived to tell that type of information. But I can tell you how the Sandy Bridge processor does it.

We all know that the Sandy Bridge has very little play when it comes to upping the BCLK frequency. This was something we knew about before the processor was even release. So, that being the case we have to rely on the changing of the CPU ratio and playing with the voltage to get the desired results we want. The results are also governed by Intel and your luck on CPU selection.

The overclocking aspect of the Extreme6 was okay but not great. With a bump in voltage to 1.45v in the BIOS we was only able to manage 4.5GHz when this particular CPU has done 4.7GHz in the past. The board does post at 4.6 but was unstable and at 4.7 we got on post at all. Maybe updates in the BIOS will allow for better overclocking in the future.

The Asrock Extreme6 is designed and aimed to the individual looking for something better than average but not quite super high end. The motherboard provides a lot of the look that we loved in the X79 Extreme9 which targets people looking for everything in a motherboard. The black and gold theme is great to the eyes, cooling is more than adequate for anyone looking to buy the board including overclockers and more than enough PCIe slot to build a gaming powerhouse.

The Extreme6 promises to be a pretty good motherboard. The overclocking abilities could use some help with new BIOSs. But overallwe were very pleased with the board. Reason being multiple GPU support, all the new features in the Z77 chipset is present and [retty damn well made.

Stay tuned for more from the Extreme6 in a few weeks ….