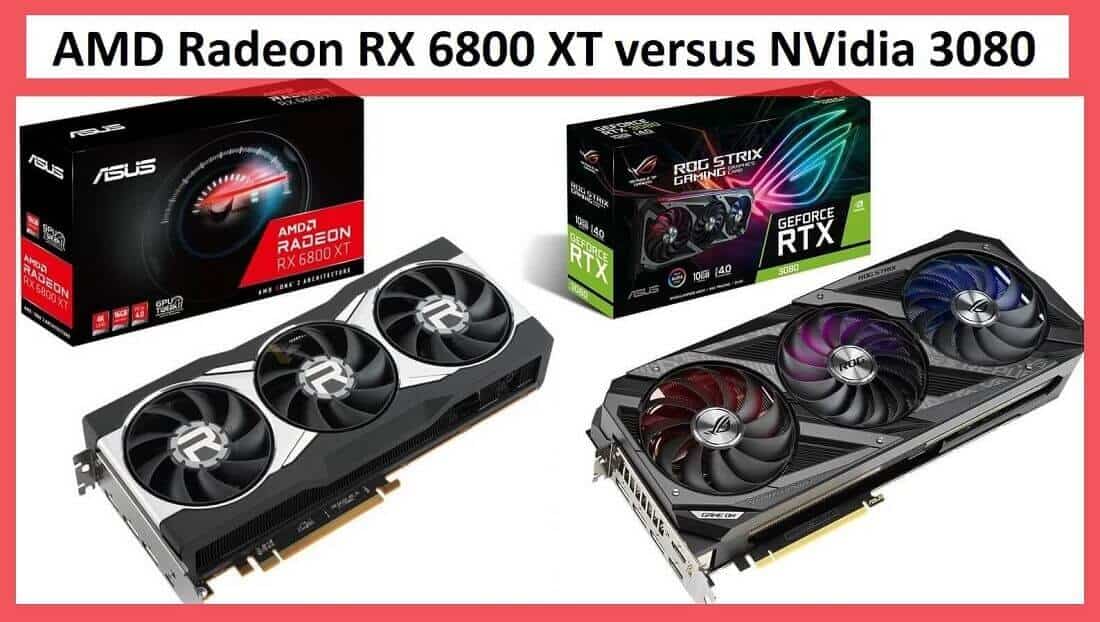 The old Team Red and Team Green dispute is back again this year!

The epic fight between AMD and Nvidia carries on, through the new video cards. We saw AMD release the RDNA2-based Radeon graphics cards – the RX 6000-series, and Nvidia taking their 2nd gen RTX architecture, the Ampere-powered RTX 30-series straight out of the oven.

While Nvidia had major stock issues with the RTX 30-series that were in greater demand than expected, AMD launched the RX 6800, RX 6800 XT and RX 6900 XT to match their rival.

When it comes to finding a GPU that offers the best performance per price ratio, two video cards come to mind: AMD Radeon RX 6800 XT and NVidia GeForce RTX 3080. But which model should you get and which one has an advantage?

Nvidia is known as the best performance GPU maker, but what if AMD is overthrowing that position with its Radeon RX 6800 XT? There’s only one way we can find out, so let’s compare these GPUs in terms of specs, benchmark test results, and pricing. 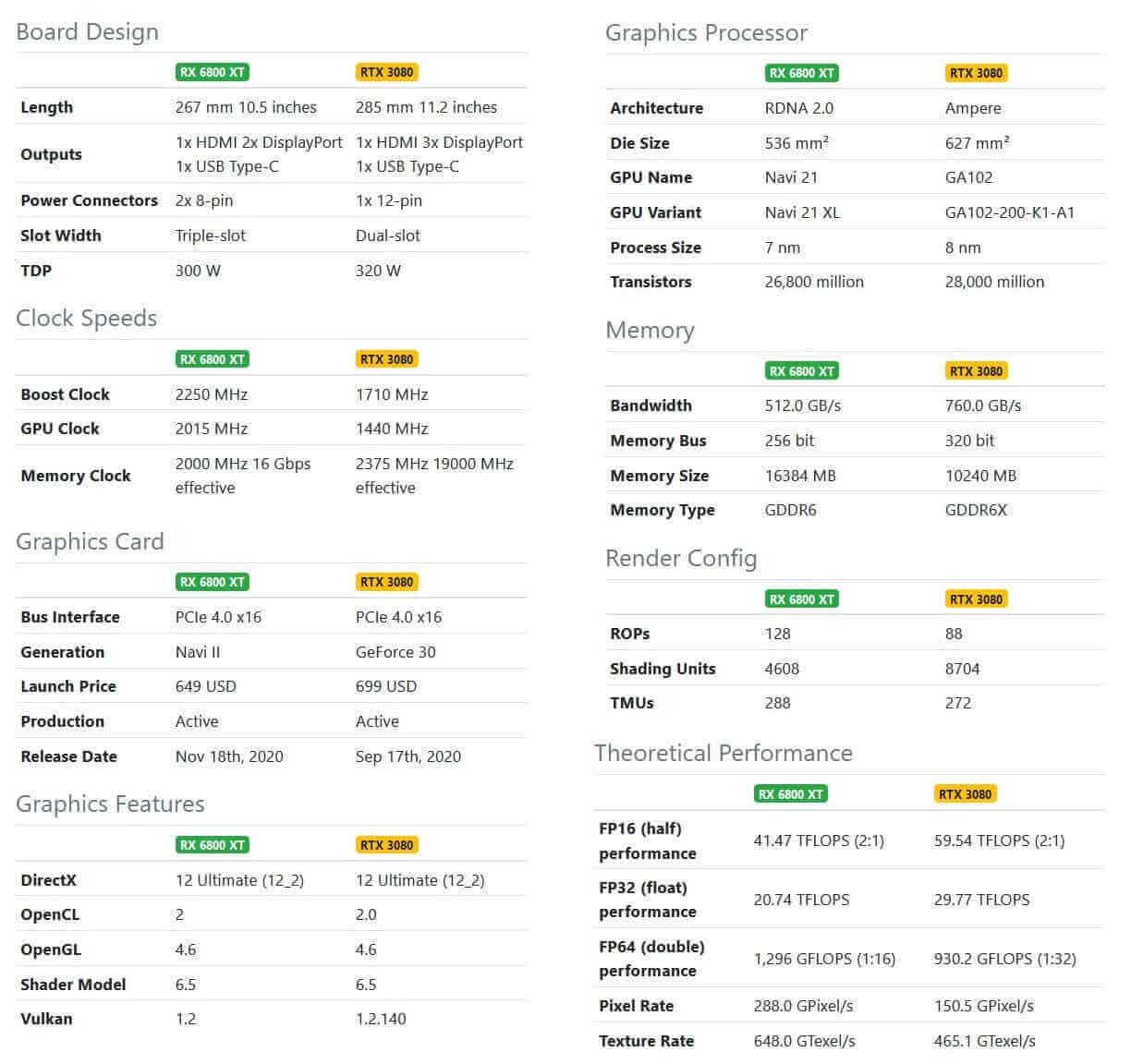 When it comes to memory, the two GPUs are not just different in terms of quantity, but also in terms of speeds. The AMD Radeon RX 6800 XT does come with 60% more VRAM than the GeForce RTX 3080, but the latter comes with a memory that has faster bandwidth speeds since it’s a GDDR6X memory.

Right now, games do not need more than 10 GB of VRAM, but in the future, they will undoubtedly be more demanding, which is where the GeForce RTX 3080 may struggle to keep up with the competition. Adobe Premiere can also benefit from more VRAM, and this is where the Radeon RX 6800 XT wins.

Looking at the memory bus, we see that the Radeon RX 6800 XT is smaller than the GeForce RTX 3080. However, AMD’s Infinity Cache adds an extra 128 MBs, closing the gap and even surpassing the competition.

Not even the GDDR6X VRAM type can save the GeForce RTX 3080 from this loss. 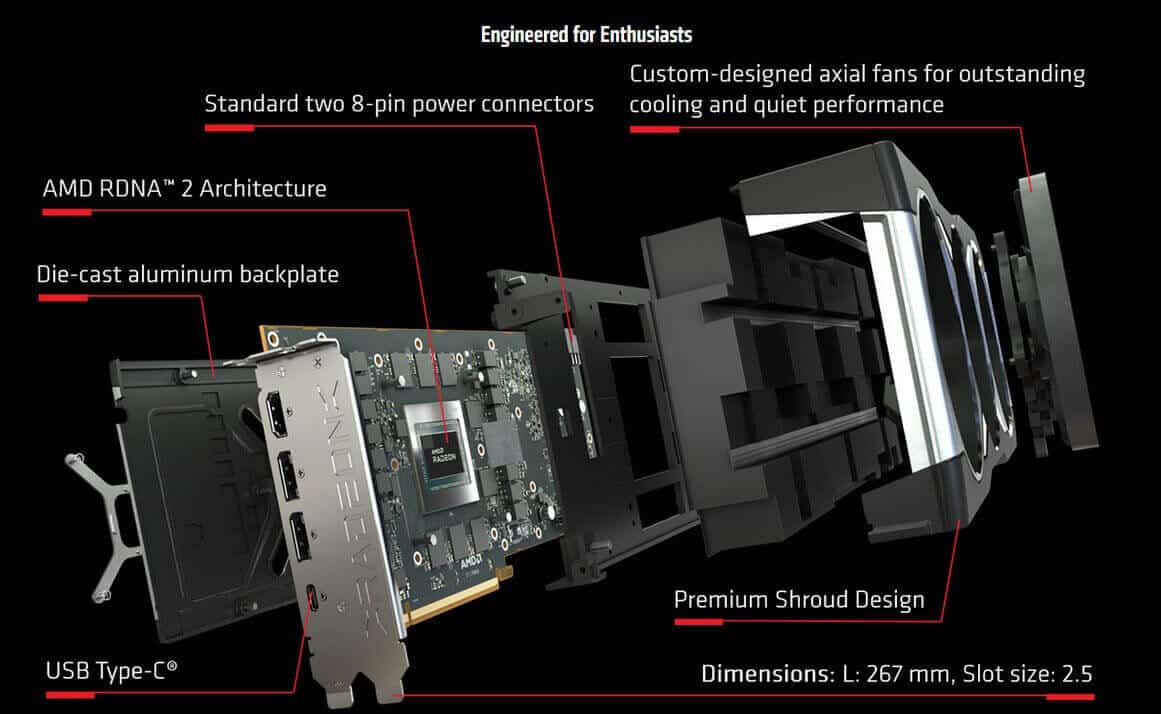 We will talk about rendering power in the benchmark results and see how the two GPUs compare not just in theoretical scores, but also in tests. 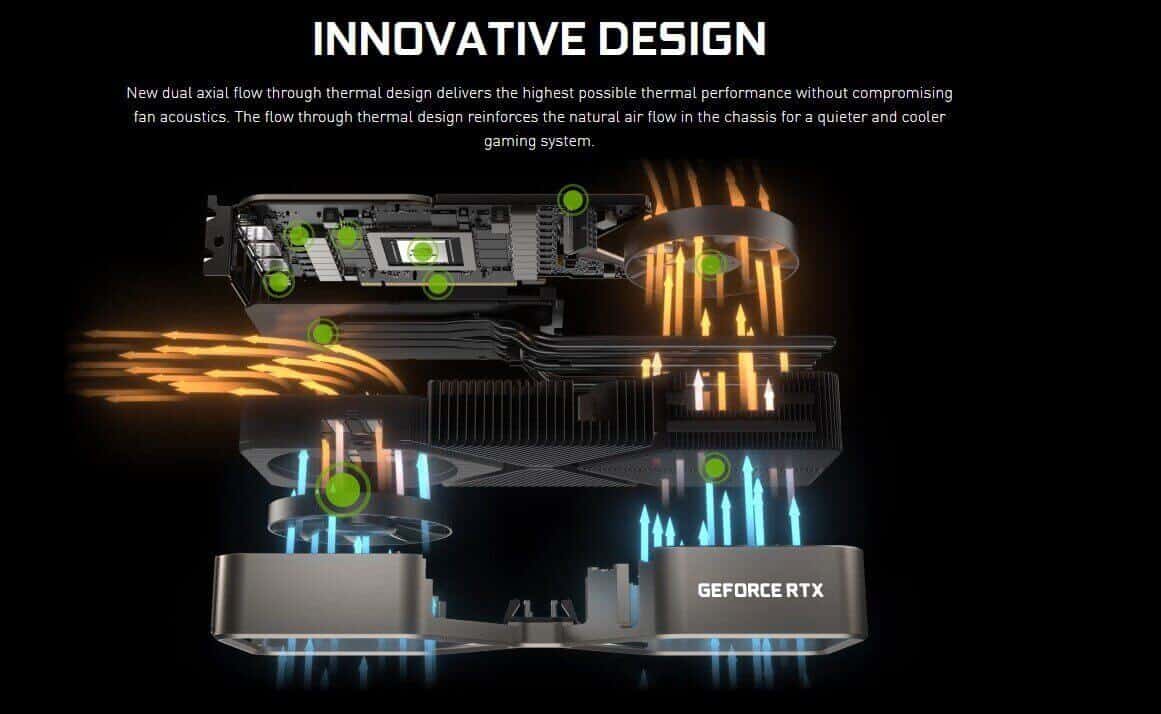 In terms of power consumption, the Radeon RX 6800 XT performance (as marketed by AMD) surpasses the GeForce RTX 3080, and it should need more power. However, it needs even less power than its rival, and this also means it runs cooler. So, once again, AMD wins in terms of power efficiency as seen on the spec sheet.

Of course, each GPU comes with its own features. We see the RDNA2 architecture on the Radeon RX 6800 XT, along with Infinity Cache, new Ray Accelerators and AMD Smart Access Memory.

Nvidia also brings a new architecture and new features, including a different thermal performance for “for a quieter and cooler gaming system.” Then, there’s DLSS AI Acceleration and Ray tracing.

Let’s see how these GPUs perform in different tests. 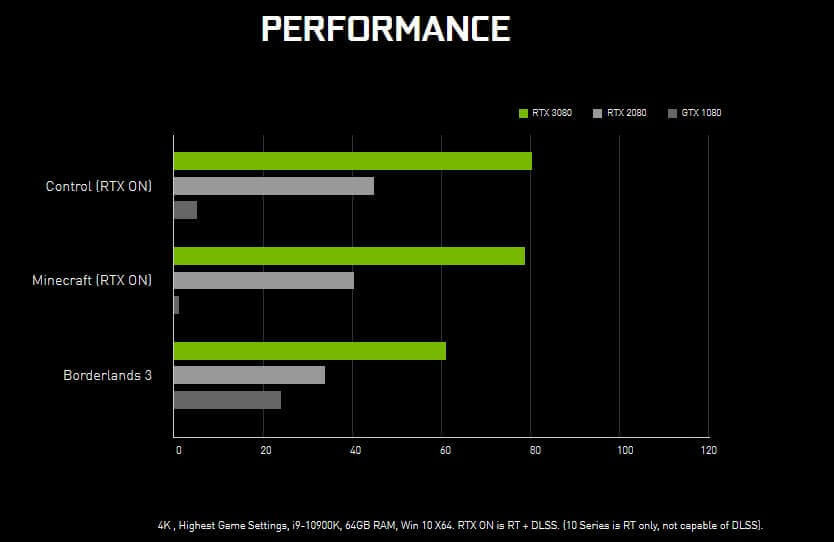 AMD also revealed benchmarks – more than what Nvidia shared so far about their GPUs. They put the RX 6800 XT against not only its predecessors but also against the competition. We chose the Borderlands benchmark from AMD to show you a comparison between the two tests.

What we don’t know from AMD is whether the GeForce RTX 3080 had RTX on and DLSS or not. If AMD were to use Ray Tracing in these tests, numbers would look totally different. But enough with tests from AMD and Nvidia. Let’s see if what they’re bragging about is true. 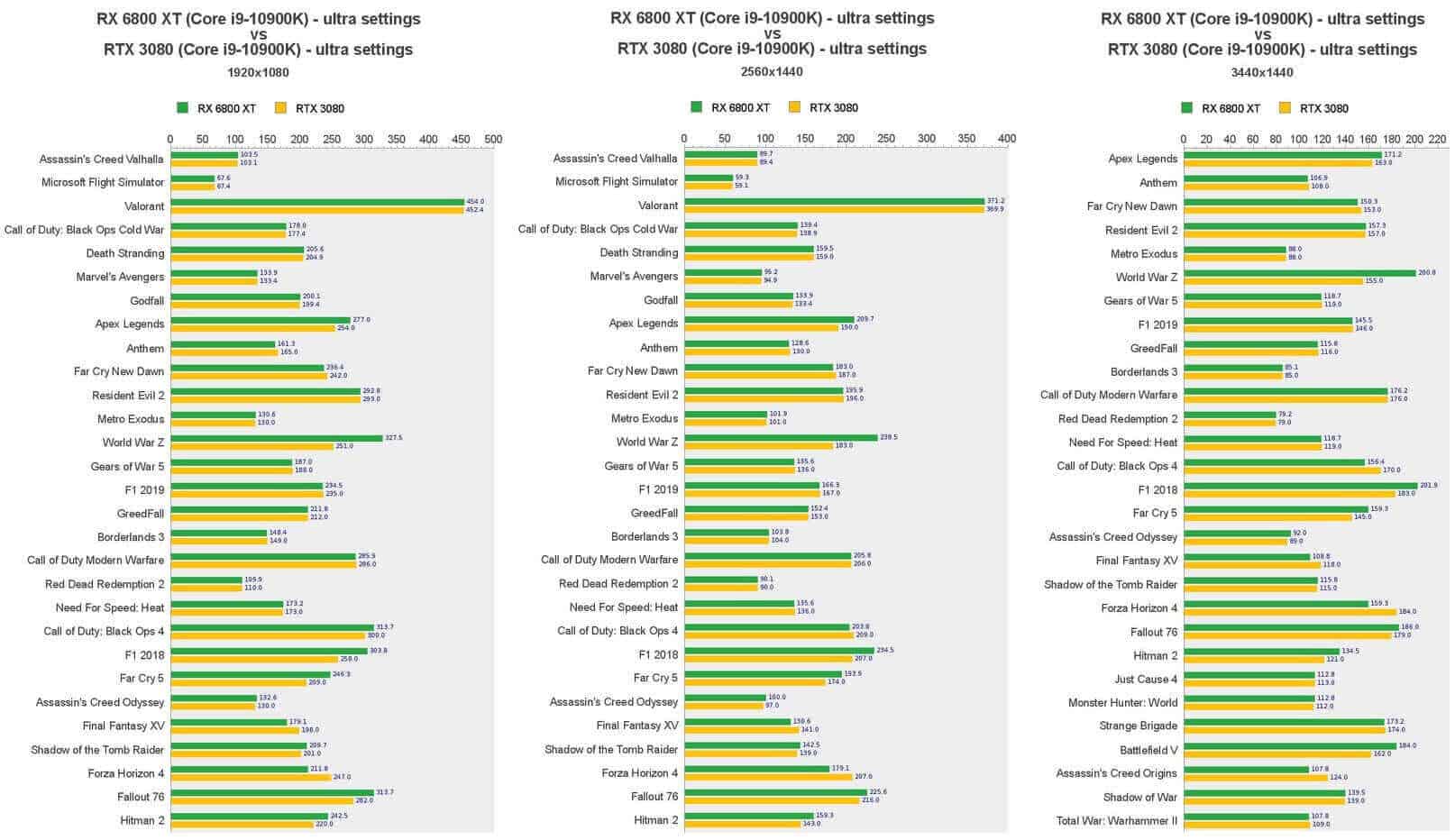 Looking at the test results in the list above, we see that both GPUs yield nearly the same results.

However, these tests don’t show us everything about what these GPUs can do.

For instance, AMD’s Rage Mode is a significant boost, offering overclocking with one touch of a button. Along with Smart Access Memory, the RX 6800 XT becomes up to 13% better than the RTX 3080 – but only in specific games (such as Forza Horizon 4).

Let’s not forget that Ray Tracing is also a sensitive subject when it comes to AMD’s performances. In synthetic benchmarks, we see the RX 6800 XT losing against not only its opponent but also against the RTX 2080 Ti. 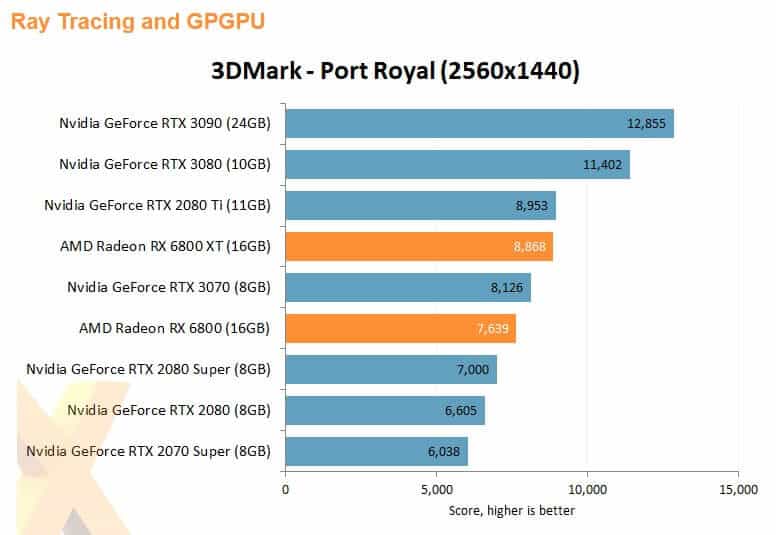 In terms of Ray Tracing, Nvidia’s RTX 3080 has the upper hand when it comes to achieving better FPS, due to its dedicated RTX cores.

In addition, turning on DLSS will yield better performance at no cost to visual fidelity – sometimes even improving it. With DLSS turned on, the FPS grows by nearly 65% in some games. 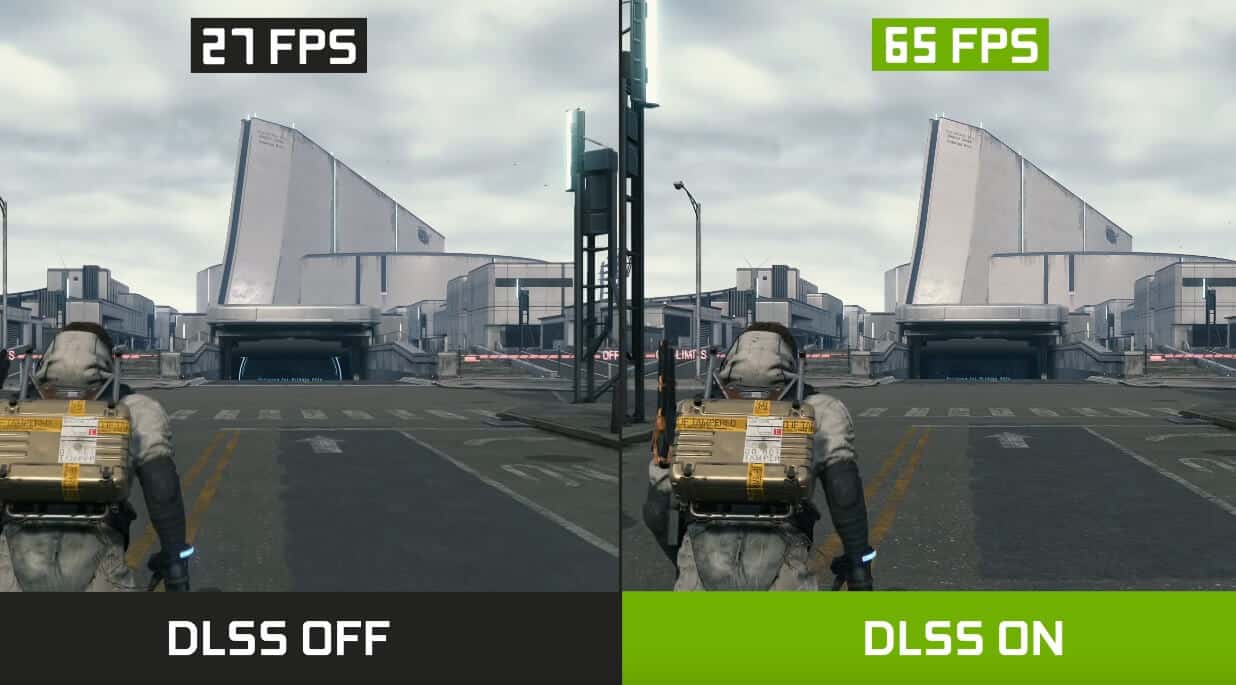 On paper, looking at the test results, and using the default settings for each GPU, there’s no noticeable difference in terms of performance.

However, once you start using Nvidia’s DLSS and Ray Tracing features, the performance and visuals of the RTX 3080 significantly improve. Even though AMD tries catching up with their Rage Mode and Smart Access Memory feature, it’s still left behind. Moreover, Smart Access Memory will only work with AMD Ryzen 5000 CPUs.

We’re still waiting for AMD to finish their work on FidelityFX, which will be AMD’s answer to Nvidia’s DLSS. On the other hand, Nvidia is also working on their own version of Smart Access Memory, which will work with any next-gen CPU. 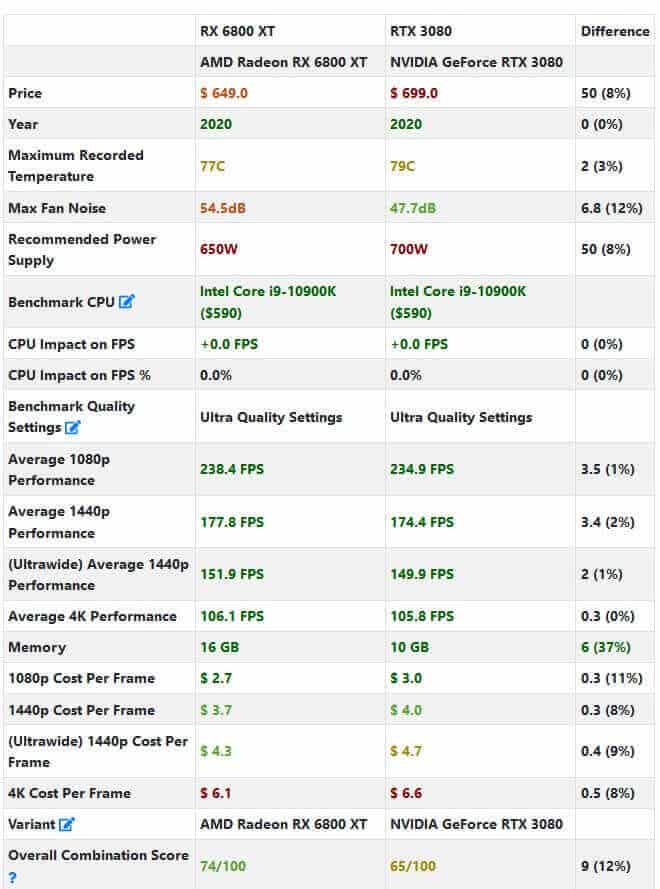 Imagine being able to play Minecraft in 4K with ray tracing on and Nvidia DLSS at 93 FPS. Now use AMD’s Radeon RX 6800 XT at the same settings and try playing at barely 30 FPS. Even though AMD tries to keep up with other options such as adaptive sharpening and varying-rate shading, it cannot offer the same option as DLSS (yet).

The verdict is that although the overall performance is the same, Nvidia’s extra features are worth the extra cash. If we wanted to build a new gaming PC, we’d grab an NVidia RTX 3080 GPU without a second thought – but that’s mostly because we’d play games that use DLSS and Ray Tracing. Unfortunately, it isn’t easy to find an NVidia RTX 3080 on the market right now.

If you’re looking to buy a powerful video card that plays standard rendered 4K resolution games, both the NVidia GeForce RTX 3080 and the AMD Radeon RX 6800 XT offer great performances. In the end, two factors will influence your choice: availability and price.

AMD Ryzen vs Intel – Is Ryzen Better than Intel?

AMD vs Nvidia, Which is Better?