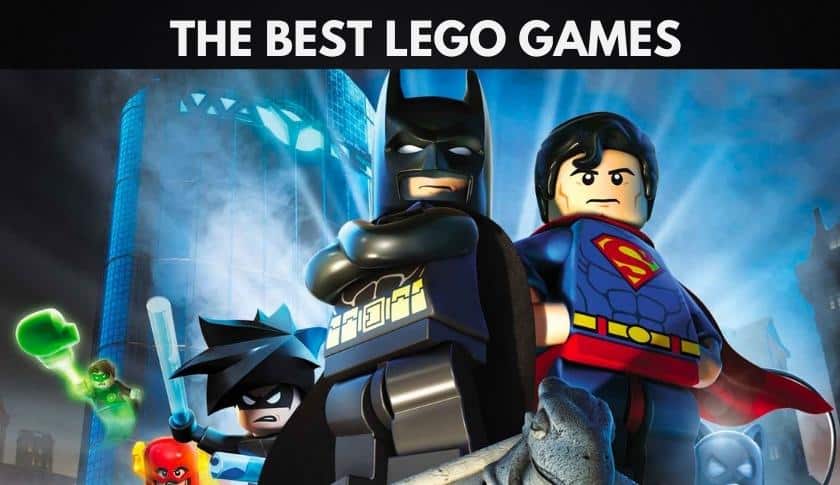 What are the best LEGO games?

With the first LEGO game released in 1997 for MS Windows, this franchise has been an ongoing staple gamers just can’t get enough of.

That said, not all LEGO games are as popular as others, and today we’ll be narrowing down the best LEGO games to the top 25. 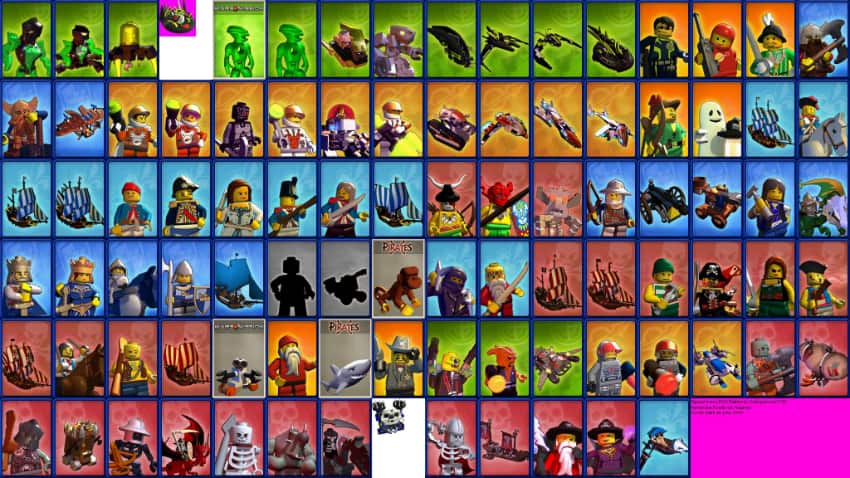 LEGO Battles gives players a lot of control, allowing them to play as either the good guys or the bad guys.

This game sees the LEGO Space, LEGO Kingdoms, and LEGO Pirates come together to allow the player to control numerous characters to play out their missions and battles.

With so much variety, it’s hard to get bored with a game like this. 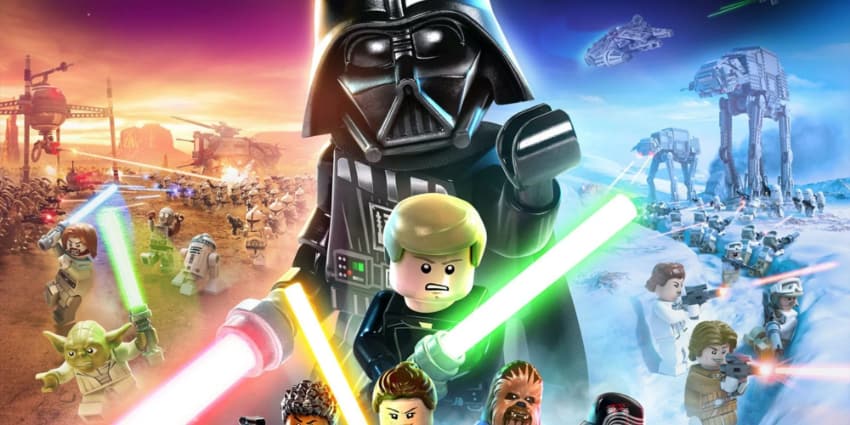 This LEGO Star Wars game allows players to jump into any of the Star Wars films in whatever order they choose.

With the ability to play as the hero or villain, explore iconic Star Wars locations and laugh along with LEGO’s unique humor, this game is simply one of the best LEGO video games players can invest in. 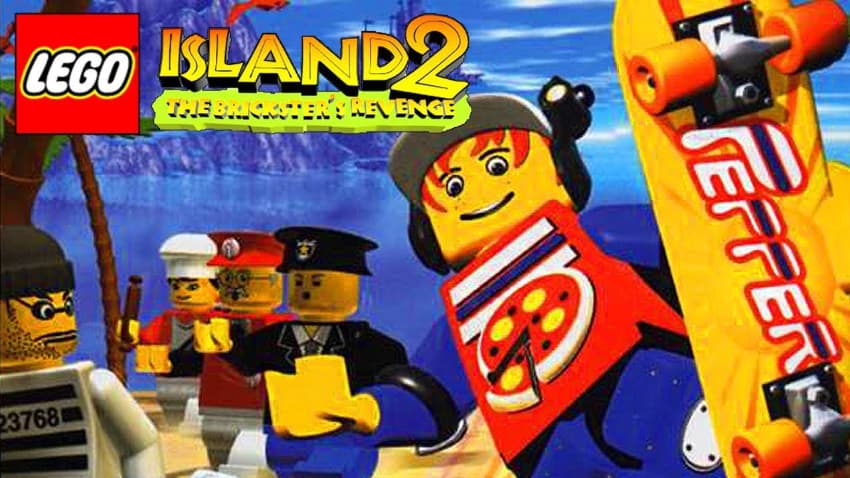 As one of the earliest PS1 games to be released, LEGO Island 2 is one of those games that immediately hits you with a feeling of nostalgia.

This video game tasked players with collecting LEGO instruction booklets in order to put the island back together after Brickster’s rampage.

Although it may seem dated compared to more recent LEGO titles, it’s simply a classic, and many gamers have fond memories of playing this game as a child. 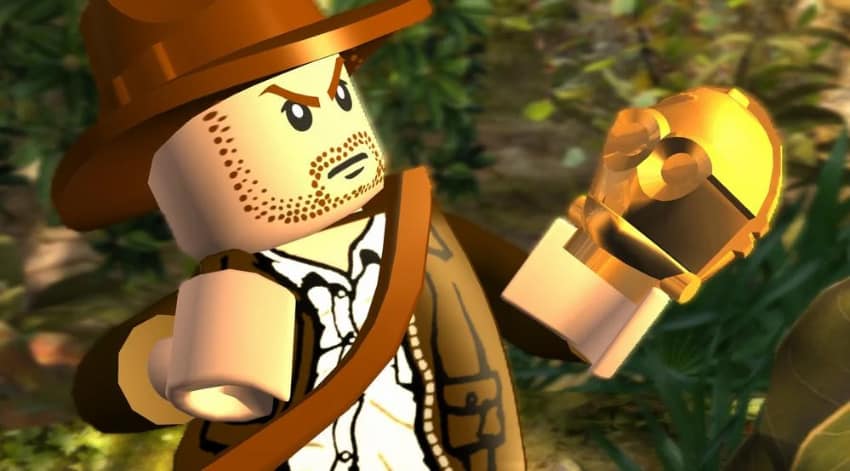 LEGO is known for making amazing games based on movies, and LEGO Indiana Jones is another example of how they’ve consistently knocked it out of the park.

This game recreates some of the most iconic movies, Raiders of the Lost Ark, The Last Crusade, and The Temple of Doom, to immerse players in a fun, fast-paced, and addicting LEGO world.

Best of all, players can unlock an impressive 82 total characters, which gives players of all ages something to work toward. 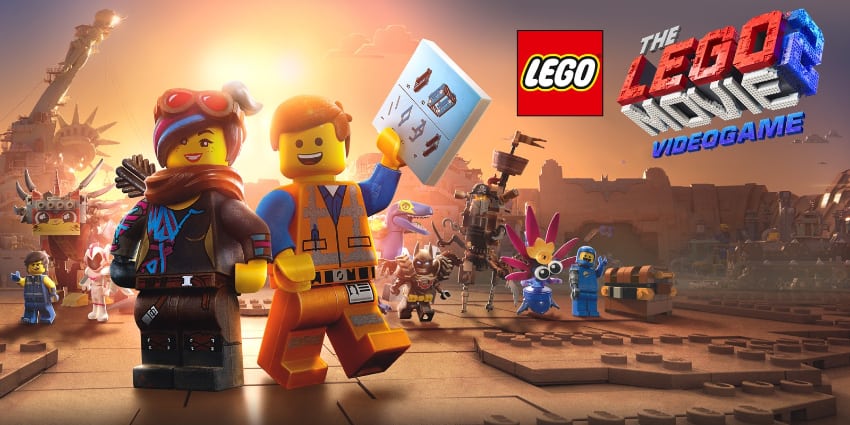 Fans of the LEGO Universe know just how good the movies were, so it’s no surprise the game based on the second movie was such a hit.

Building on the mechanics from the first game, the LEGO Movie 2 video game adds additional characters from both films, with the DLC bringing back even more from the first movie.

For LEGO fans who love creating their own structures, this game really shines, and while the plot isn’t incredibly deep, it is both amusing and entertaining to play. 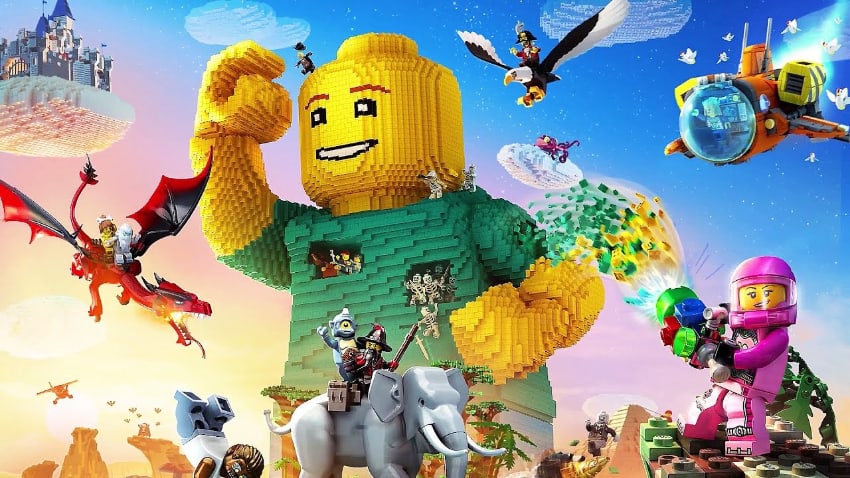 Speaking of LEGO fans who love building, this massive open-world sandbox is one of the best for those who love to build and play around with creating.

With the ability to explore a procedurally-generated open world or a world created by other players, there is a lot of fun to be had in LEGO Worlds.

Fans of Minecraft will especially love this addition to the LEGO franchise. 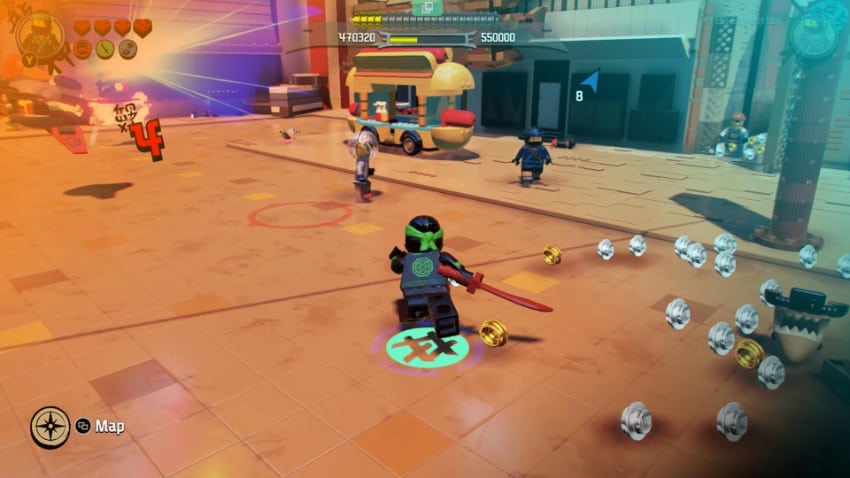 Everyone loves ninjas, and LEGO ninjas are possibly some of the coolest.

Whether you played it when it came out or picked it up for the first time when it was free in 2020, LEGO Ninjago is a game that all LEGO fans need to play at least once. 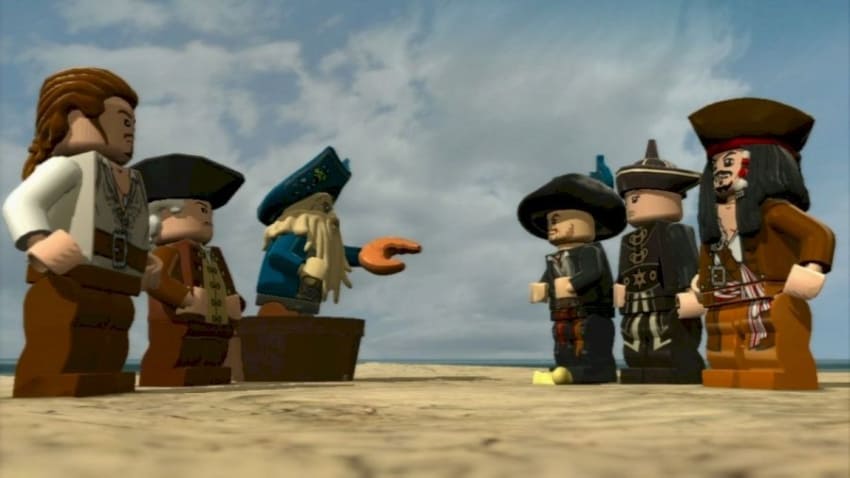 This swashbuckling game takes the events of The Curse of the Black Pearl, Dead Man’s Chest, At World’s End, and On Stranger Tides and puts them together in the LEGO world.

Each character has unique abilities that can help during adventures, and you’re going to want to collect them all for the best experience.

If you’re looking to set sail with one of the best LEGO games ever made, this is definitely one you don’t want to miss. 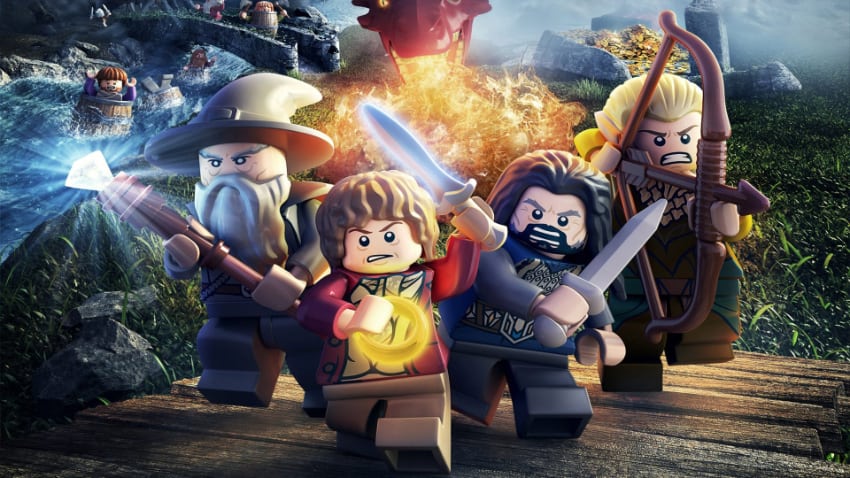 From the Caribbean to Middle Earth, LEGO: The Hobbit brings to life Bilbo, Thorin, and the gang in a semi-open world game that is easy to get lost in.

With voiceovers from the films, unique collectibles, characters, and lots of iconic locations to visit, this game is a must-have for any Lord of the Rings lover.

The Incredibles is a much-beloved film, and the LEGO game manages to take both movies and make them even more engaging and hilarious.

Playing through the game really makes you feel like part of this superhero family, and the action never stops with plenty of gameplay to keep you occupied.

There is even a two-player co-op gameplay building mode that enables you to have more fun with your friends or family. 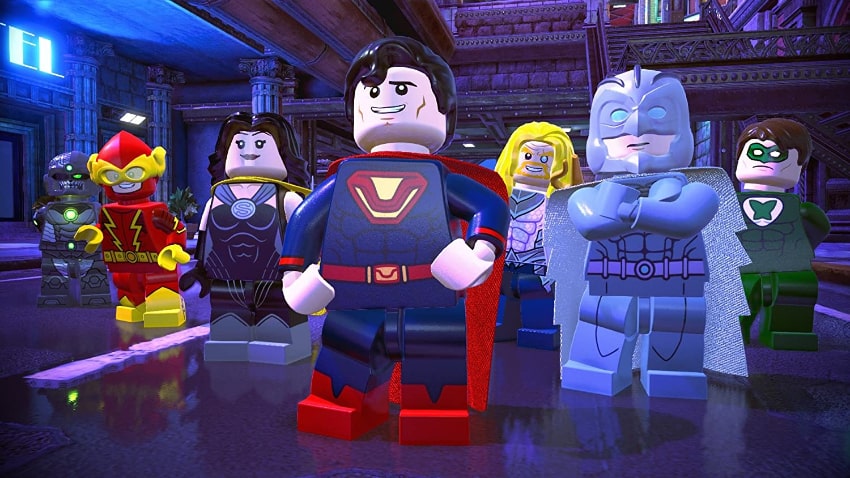 Sometimes you just want to play as the villain, and thankfully LEGO has provided.

Needless to say, the main characters are absolutely hilarious, especially the Joker, who really lives up to his name.

You can even use the character creator to make your own characters by mixing and matching parts from other characters! 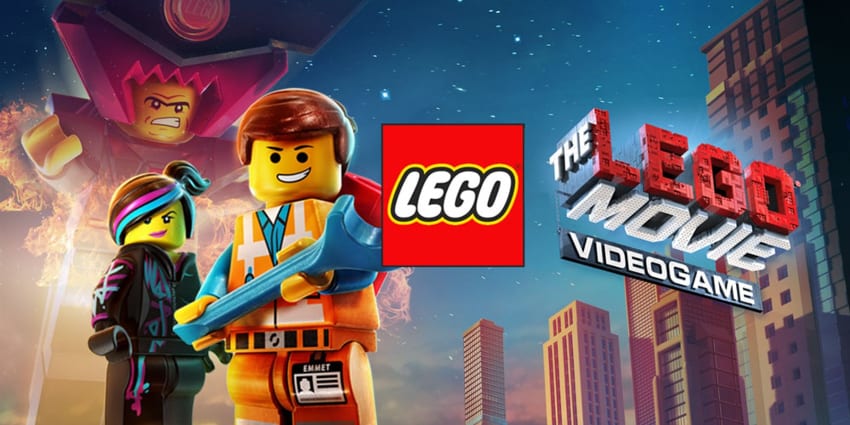 Like its successor, this video game is an absolute gem.

With loads of new features, mini-games, and building, this game is a joy to play, and it doesn’t just rehash the movie and call it a day.

Although it is fairly short compared to some of the others, every second is action-packed and worth playing at least once. 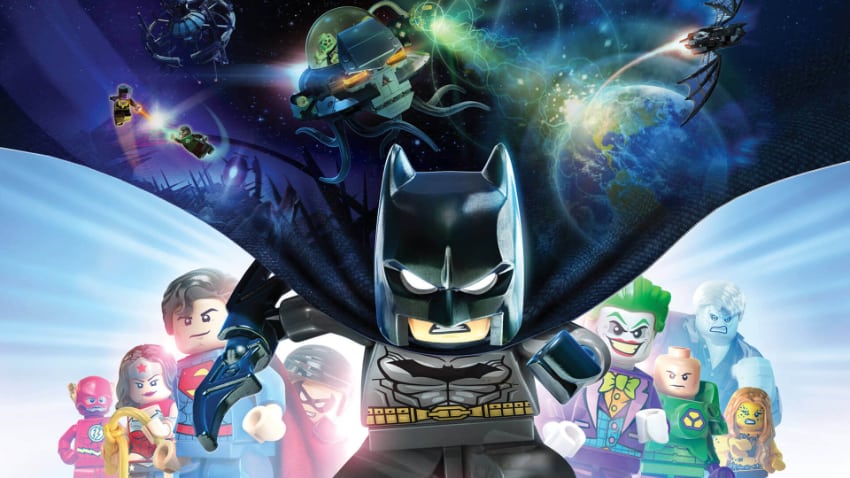 A sequel to Lego Batman 2, this game differentiates itself by moving away from the gritty, corrupt streets of Gotham City to partner the Dark Knight with other DC superheroes to stop the evil Brainiac from devastating the planet.

This game takes planets to many different iconic locations, even the Green Lantern planets.

Batman definitely isn’t stuck in Gotham anymore, and this game truly helps break the mold and give players something unique to indulge in. 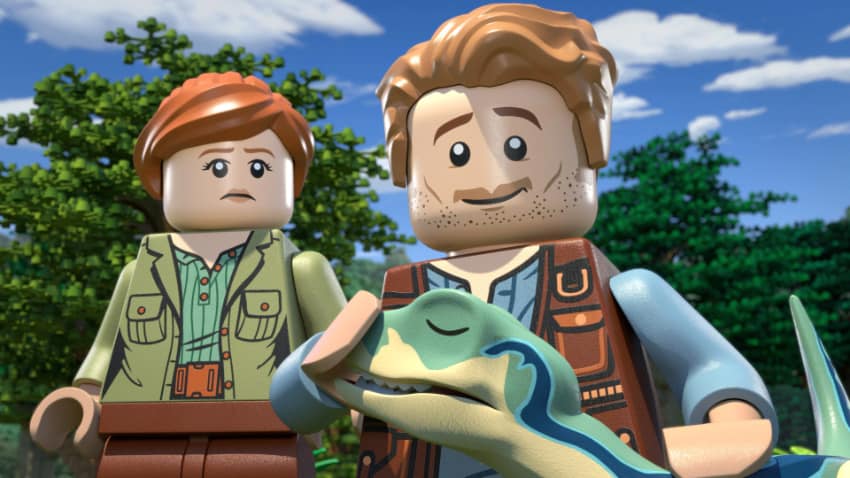 Covering all four movies leading up to Jurassic World, this game features every character you can imagine, over 20 dinosaurs, and loads of gameplay that you will easily lose hours playing. 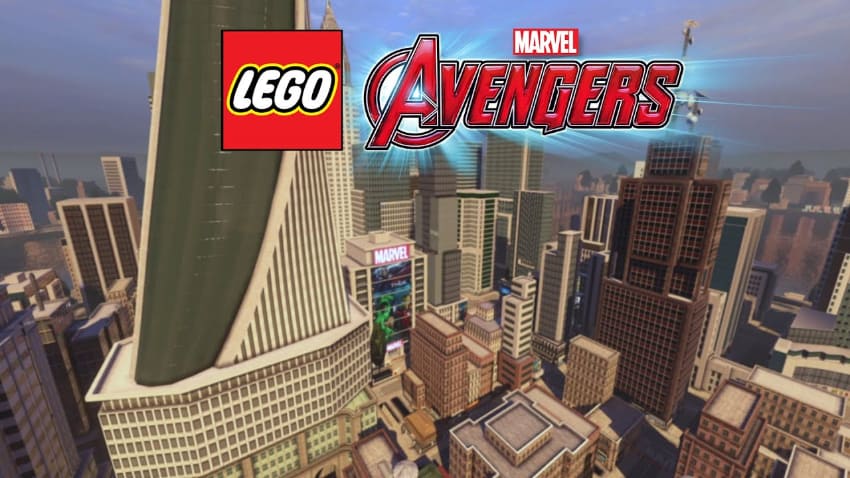 Taking place in the Marvel Universe, this game covers the events of Avengers and Age of Ultron, along with iconic moments from each Avengers origin film.

Best of all, it features voiceovers by the films’ actors, and you can create team-ups for unique combo attacks, which is just so satisfying. 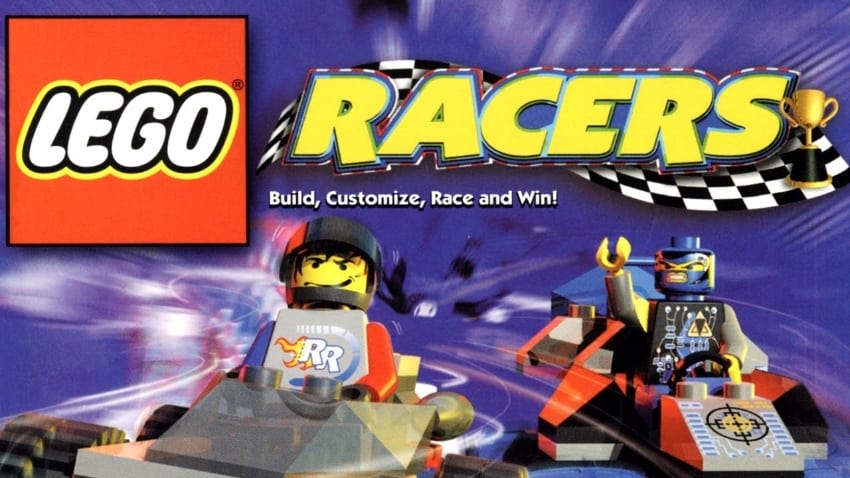 An oldie but a goodie, LEGO Racers allows players to race all around LEGOLAND as part of the championship to be the absolute best.

Despite this game’s age, the graphics are fairly solid, and you can even build your own unique cars using LEGO bricks! 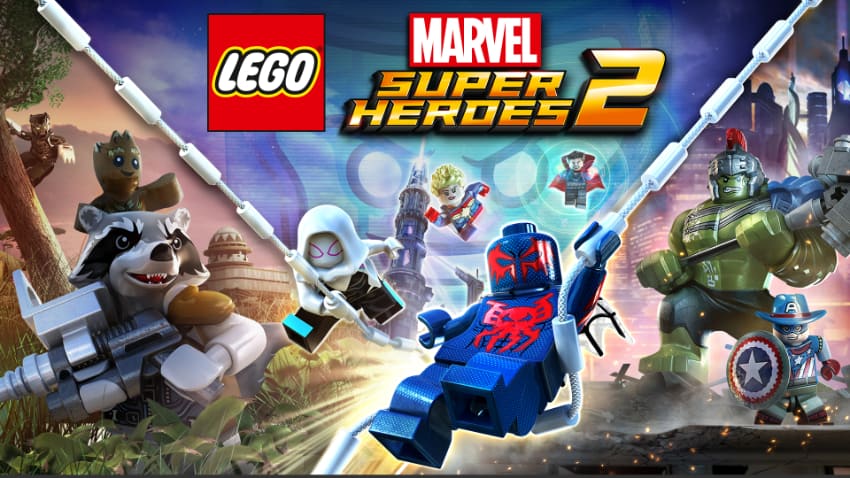 As a sequel to the first game, this game took everything and turned it up a notch.

Although it lacked the Fantastic Four and X-Men (due to copyright), it more than made up for it by adding in massive open-world areas and 4 player battle arenas.

If you enjoyed LEGO Marvel Super Heroes 1, you’re not going to want to overlook this. 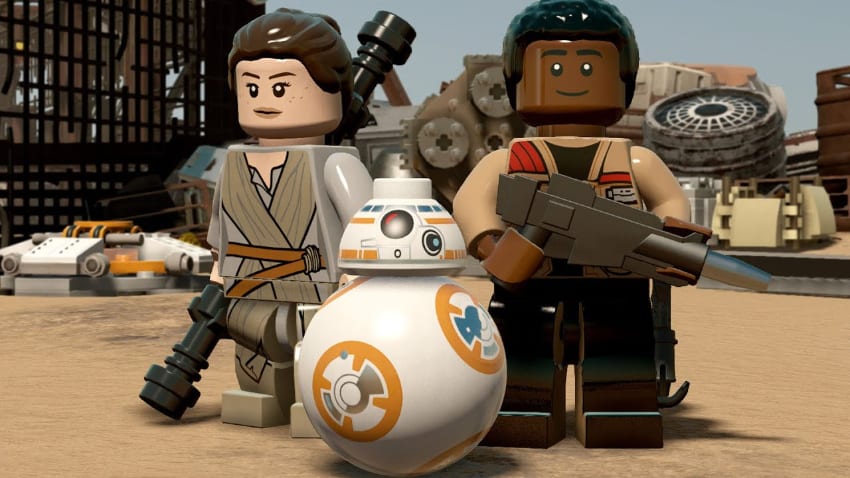 Star Wars LEGO games are some of the best, and The Force Awakens is the perfect example.

Not only is it absolutely gorgeous, something you may not expect from a world of blocks, but the storytelling makes it one of the best LEGO Star Wars games ever created. (Possibly even better than The Force Awakens movie!) 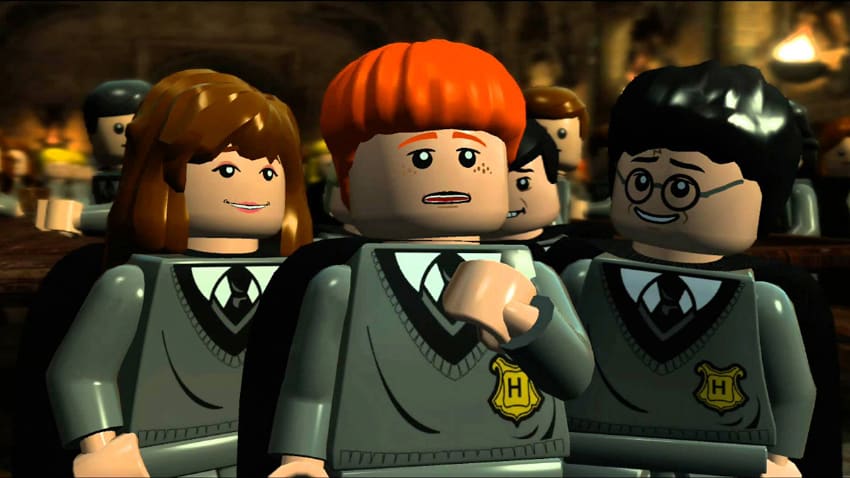 Split up into two games, LEGO Harry Potter Years 1-4 and 5-7, these games cover everything and capture the magic of the wizarding world and Hogwarts.

Even those who aren’t complete Potterheads will, without a doubt, enjoy these installments, as they capture the Harry Potter franchise in every respect and make it so even those unfamiliar with the story aren’t left out. 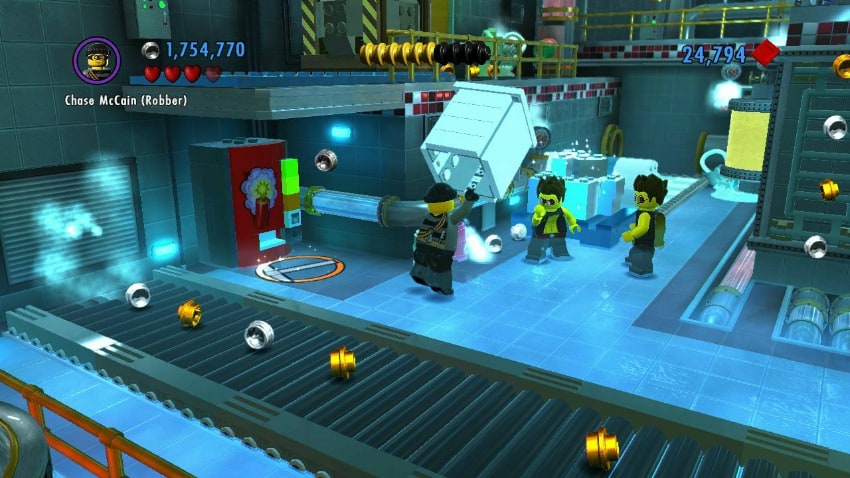 As a LEGO game that doesn’t follow a movie plot, players of LEGO City Undercover follow a cop named Chase McCain as he takes down a notorious gangster terrorizing LEGO City.

With over 1 million copies sold, this game is one of the best-selling games for the Wii-U, and quite possibly one of the funniest.

It’s almost like Grand Theft Auto but without the murder and gratuitous violence. Now that’s fun for the whole family! 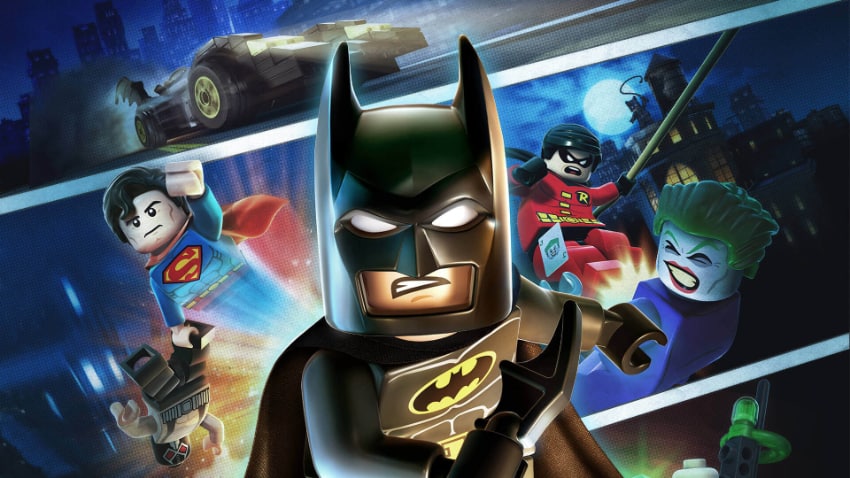 Often considered to be the first modern LEGO game, LEGO Batman 2 forgoes the quirky style seen in Star Wars and Indiana Jones, replacing it with a cleaner, more commercialized appearance.

With a tightly woven narrative, witty voice-acted humor, and engaging gameplay, this is one entry in the LEGO series that fans aren’t going to want to miss. 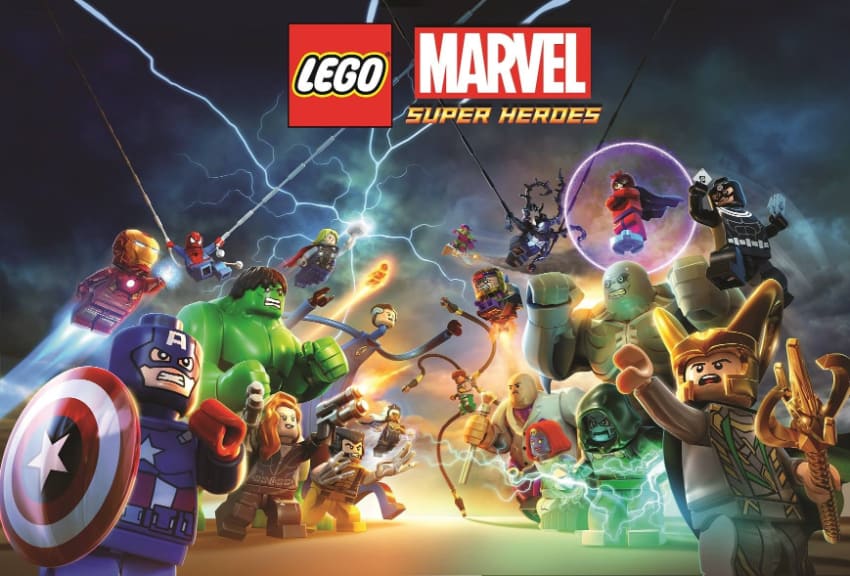 Lego Marvel Super Heroes may have a relatively simple story that follows the standard bad guys trying to destroy the world trope, but it’s the cast of characters and fast-paced gameplay that make it really shine.

Unlike its sequel, you can even play as the Fantastic Four or X-Men members before copyright took them away.

If you’re a comic lover, there are some more obscure characters thrown in that run-of-the-mill movie lovers won’t recognize.

But regardless of whether you’re team Squirrel Girl or team Captain America, there’s something for everyone to love in this game.

Additionally, this game included the largest open-world map of its time in any LEGO game, and the feeling of roaming around New York as the superhero of your choice is really something special. 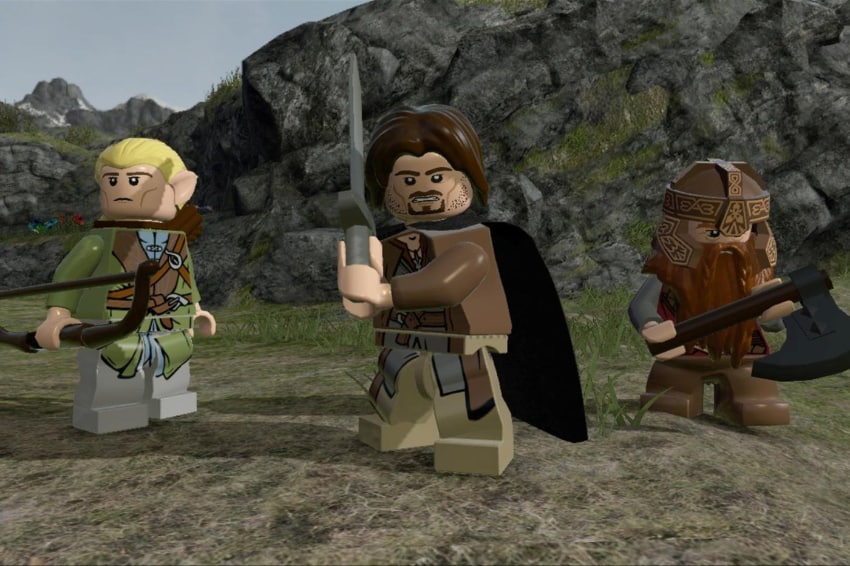 Although we mentioned The Hobbit earlier, there’s a reason that LEGO Lord of the Rings ranks higher on this list.

Encompassing the entirety of Frodo’s saga, this journey across Middle Earth is truly stunning, and the beautiful landscapes lose none of their appeal even when made from blocks.

There’s a reason this was a best-selling LEGO game, and once you play it for yourself, you’ll see exactly why. 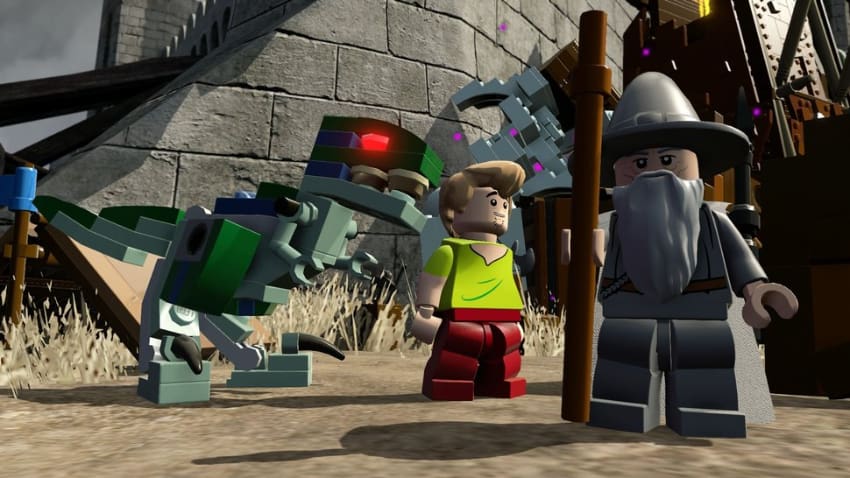 LEGO Dimensions took player interactivity to a whole new level at a time when Disney Infinity was all the rage.

Allowing the player to import their real LEGO sets into the game to unlock characters, campaigns, and areas, this one game is and was unlike any other.

It even featured a lot of the popular characters from the LEGO movies, Marvel LEGO Games, and even Dr. Who, which was a great surprise for fans of the British series.

Although the downside of LEGO Dimensions was the cost of everything it would take to experience everything in the game, it still stands out as one of the most unique and engaging LEGO games to date. 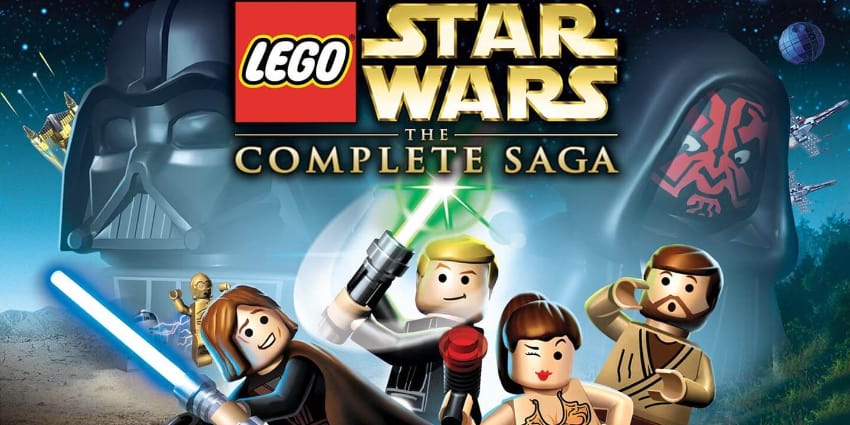 As the first Star Wars LEGO game and one that covers the events of the prequels, this game was so much better than anyone could have expected.

For that reason, it lands at the top of our list as the best game in the LEGO series.

While this LEGO Star Wars game may not have looked impressive at first glance, once you played it, you couldn’t help but be hooked by the action-adventure gameplay, hilarious jokes, and incredible amount of unlockable content.

With over 120 characters, incredible level design, and iconic locations from the Star Wars universe, this is one LEGO game that stands out from the rest as one that any fan should take time to play.

Choosing the best LEGO titles can be tough because there are so many great games that utilize that winning LEGO game formula.

LEGO games are so unique and engaging that gamers of all ages can find something to enjoy about them. No matter who you are, there’s a LEGO video game for you.

Here’s a quick recap of the 25 best LEGO games:

What’s the best LEGO game, in your opinion? Leave a comment below.