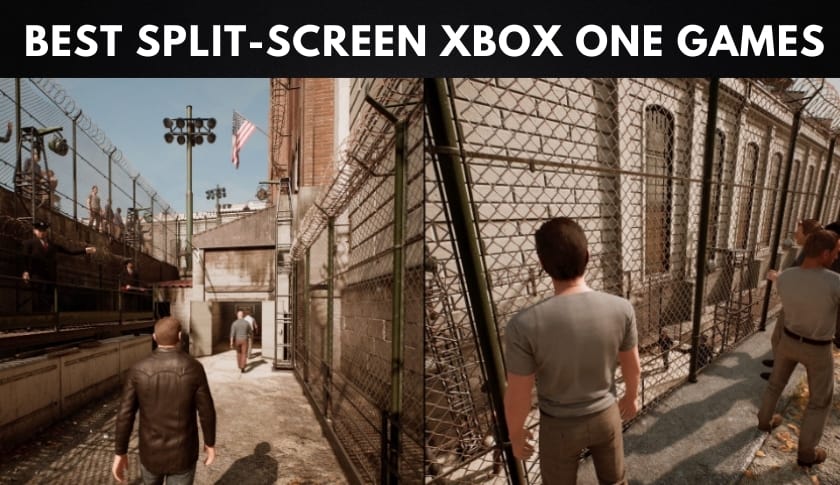 What are the best split-screen Xbox One games?

Don’t get us wrong, playing online is great, but sometimes you can’t beat a good old split-screen with your mates.

It might seem a bit prehistoric, but a great split-screen game never gets old, in our opinion.

With that in mind, we’ve put together a list of the 15 best split-screen Xbox One games that we think are worth your time checking out.

Here’s a list of the 15 best split-screen Xbox One games.

The 15 Best Split-Screen Xbox One Games

The list of Xbox One games and figures mentioned below have been compiled from various sources around the web, such as Wikipedia.

These are the 15 best split-screen Xbox One games: 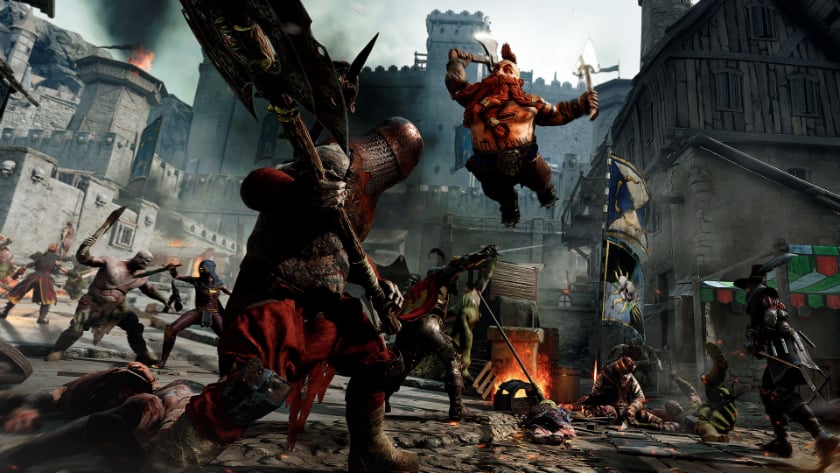 Warhammer: Vermintide 2 is the second installment in the Warhammer series by Fatshark.

The first-person action video game is the sequel to Warhammer: End Times – Vermintide and was released for the Xbox One on July 11, 2018.

It’s set in the fictional Warhammer Fantasy universe, and players do battle with the Skaven, a race of rat-men, and the parasitic entities known as the Chaos army.

The cooperative game allows players to work their way through 13 bases, in split-screen mode, as five different characters.

Upon release, Warhammer: Vermintide 2 was met with positive reviews from critics, and the PC version was rated as the “best cooperative game of 2018” by PC Gamer. 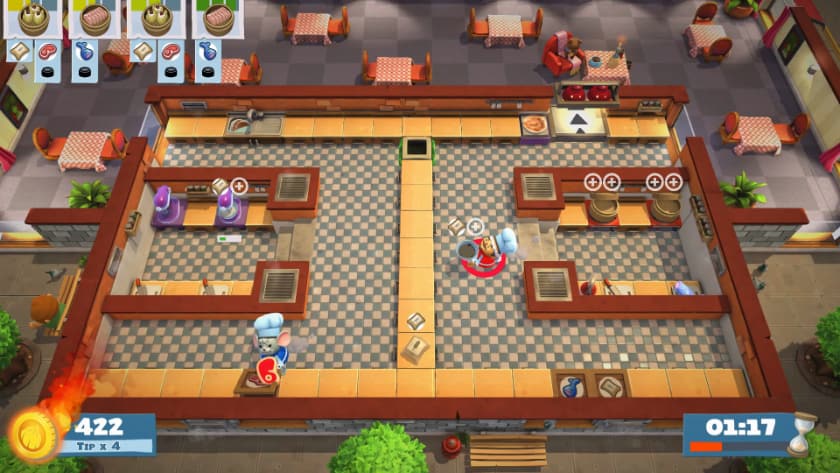 If you’re into your cooking, and you’ve got a mate that also enjoys it, then this is the game for you.

Overcooked 2 is the sequel to Overcooked and was released by Team17 for the Xbox One in 2018.

The cooperative cooking simulation game sees up to four players simultaneously cooking and preparing food orders in busy restaurants, which creates a manic and stressful environment.

Overcooked 2 scored highly with critics and won “Best Family Game” at The Game Awards 2018, and “Game of the Year” at Develop: Star Awards. 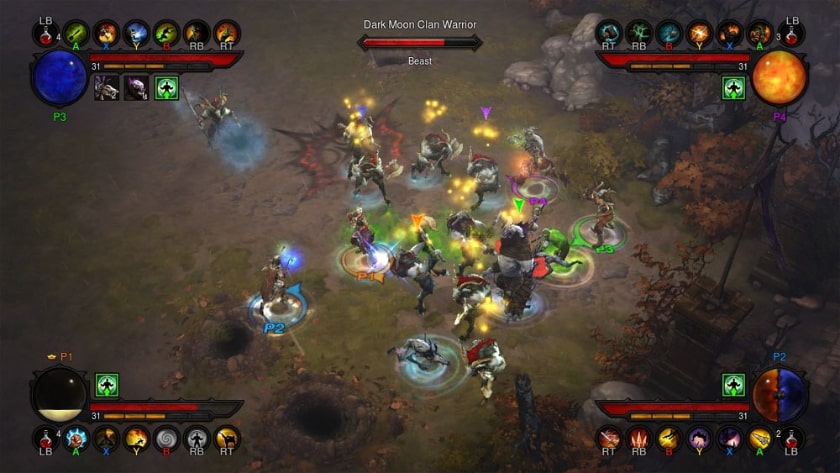 The next best split-screen Xbox One game is one of our personal favorites, Diablo 3.

The hack-and-slash action role-playing game is the third installment in the Diablo franchise and was developed and published by Blizzard.

Released on the Xbox One in August 2014 and sees players battle their way through a series of quests to find and defeat the Lord of Terror, Diablo.

The game became the “fastest-selling PC game” in its first 24 hours of release and received widespread critical acclaim.

Like we said before, it’s one of our personal favorites and is arguably the best hack-and-slash cooperative game of all time! 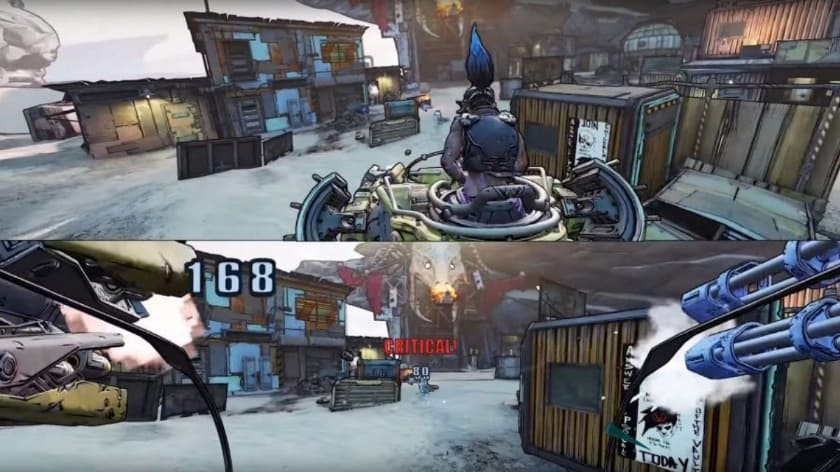 Borderlands 3 was developed by Gearbox Software and was published by 2K games in 2019.

It’s an action role-playing first-person shooter and the sequel to Borderlands 2.

The aim of the game is to complete a series of missions, in either cooperative or single-player mode, while trying to stop a couple of cult-leading twins, Troy and Tyreen Calypso, from gaining control of alien vaults throughout the galaxy.

Borderlands 3 was met with positive reviews upon release and has since won multiple industry awards, such as “Best Game Design,” “Best User Experience,” and “Best Art Direction” at the 2020 Webby Awards. 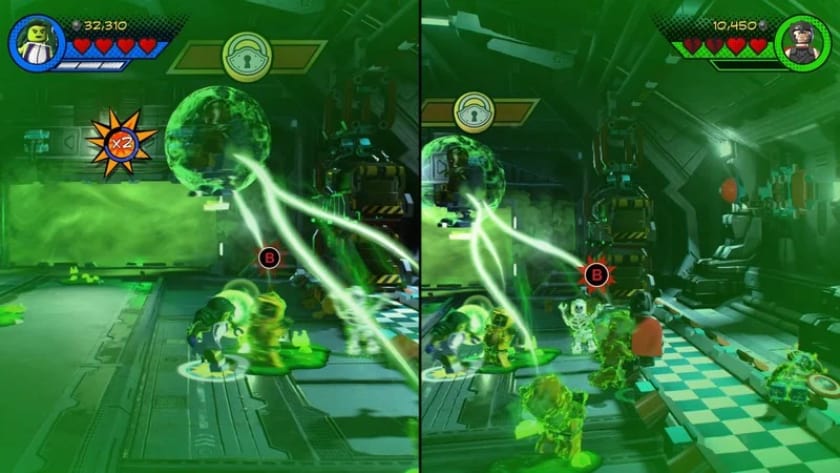 It was developed by Traveller’s Tales and is an action-adventure game that allows players to complete a series of puzzle-solving scenarios and action-adventure sequences from a third-person perspective.

The story centers around different superheroes from the Marvel Universe who try to stop Kang the Conqueror’s reign of terror.

Upon release, the game’s linguistic content and ability to play as multiple Marvel characters were praised by critics, and it was well-received overall. 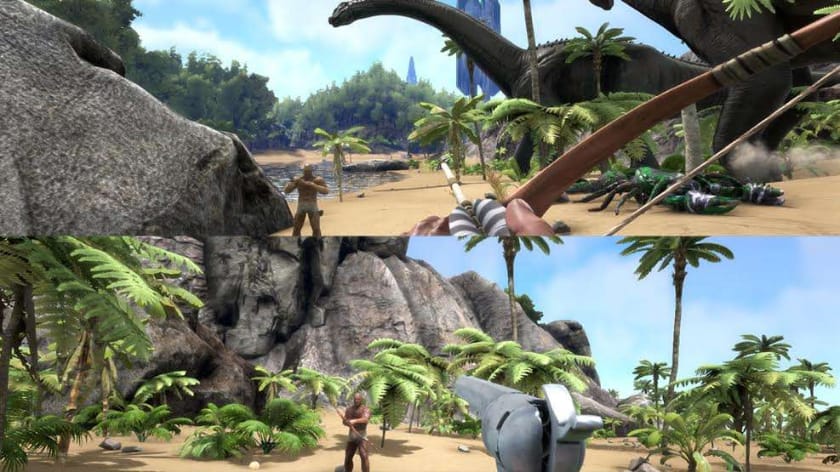 It’s an action-adventure video game that was published by Studio Wildcard in 2017.

The game revolves around survival, as players fight for their lives on an island filled with ravenous dinosaurs and hostile prehistoric creatures, using nothing more than improvised weapons and basic firearms to survive.

Ark: Survival Evolved can be played from a third-person or first-person perspective across an open-world environment.

Since its release, the game has achieved significant levels of success and is an excellent multiplayer for the Xbox One. 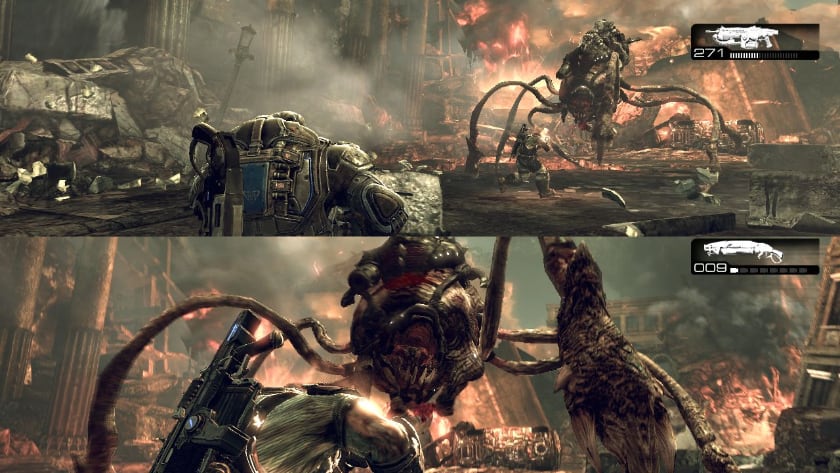 It was published by Microsoft Studios for the Xbox One in 2016 and was met with positive reviews from critics about its visuals, set pieces, and combat.

The third-person shooter takes place approximately 25 years after Gears of War 3 and focuses on JD Fenix’s battle with a new threat to humanity.

You can play alongside a friend, using split-screen, and work together to complete various missions on the way to putting an end to the tyranny that’s been released on humankind.

Upon release, Gears of War 4 received favorable reviews from critics and became the third best-selling game in the United States in October 2016. 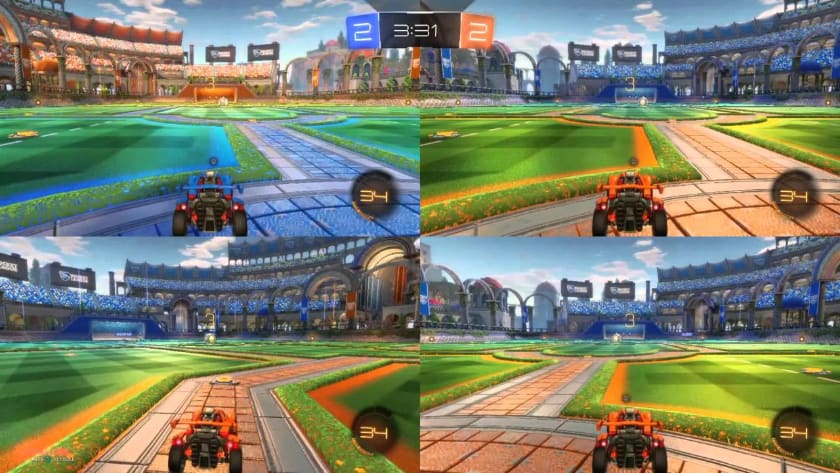 If you like soccer and futuristic cars, then Rocket League is the game for you.

It was developed and published by Psyonix and released for the Xbox One in 2016.

It’s all about trying to beat your opponent by scoring the most goals with your vehicle.

You choose to play with up to 8 team members, and it gives you the option to play online in single-player or multiplayer mode; however, we split-screen mode is the best in our opinion.

When Rocket League was released, critics praised its graphics, presentation, and overall improvements to its gameplay.

Since its debut, the game has amassed over 40 million players and won numerous industry awards. 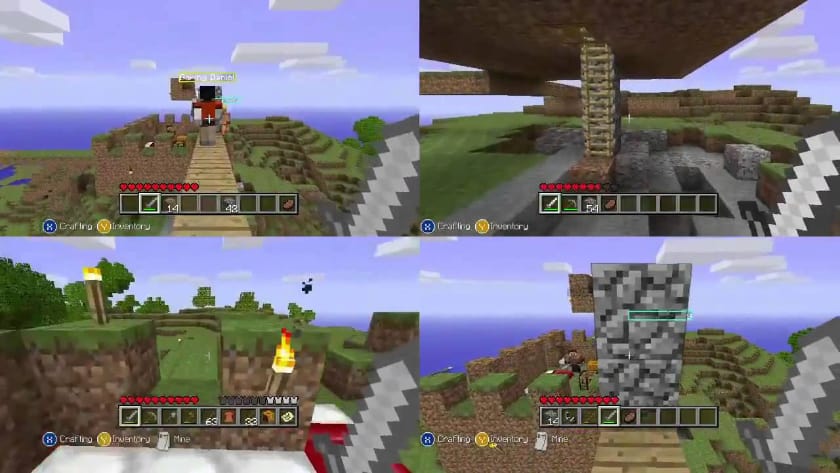 Minecraft was released on the Xbox One in 2014 as a sandbox video game that can be played in both single-player and multiplayer mode.

Since its release, Minecraft has gained massive popularity and has become the best-selling video game of all time, with approximately 126 million monthly active users.

In the game, players explore a 3D generated world in search of raw materials and various other tools and items.

While exploring, players encounter different computer-controlled mobs that threaten their survival and have the chance to cooperate with other players if they wish.

Minecraft is regarded as one of the greatest and most influential video games of all time and was recently inducted into the World Video Game Hall of Fame. 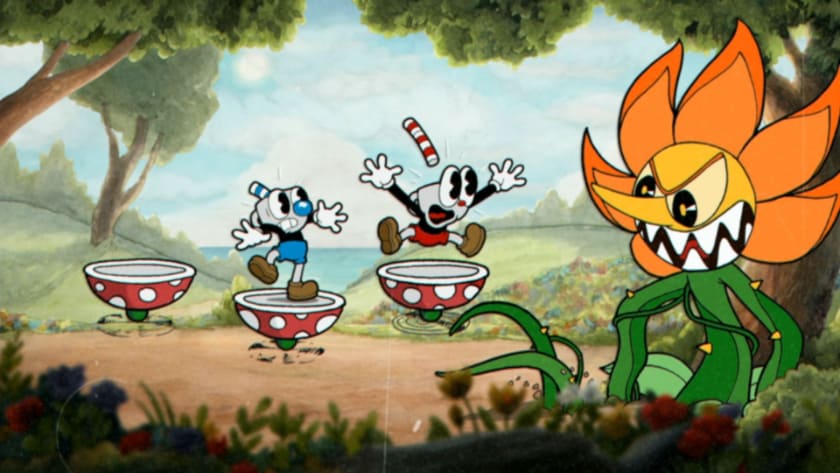 Taking inspiration from the “rubber hose” animation style of the 1930s Cuphead is a run and gun style video game that was developed and published by StudioMDHR.

The game was released on the Xbox One in 2017 and became a worldwide commercial success.

Players control characters, “Cuphead” and “Mugman,” as they work their way through levels to repay their debt to the devil, defeating several bosses as they go.

Cuphead is a great game to play with friends and even picked an award for “Best Co-op Multiplayer” at Game Informer’s Readers Choice Best of 2017 Awards. 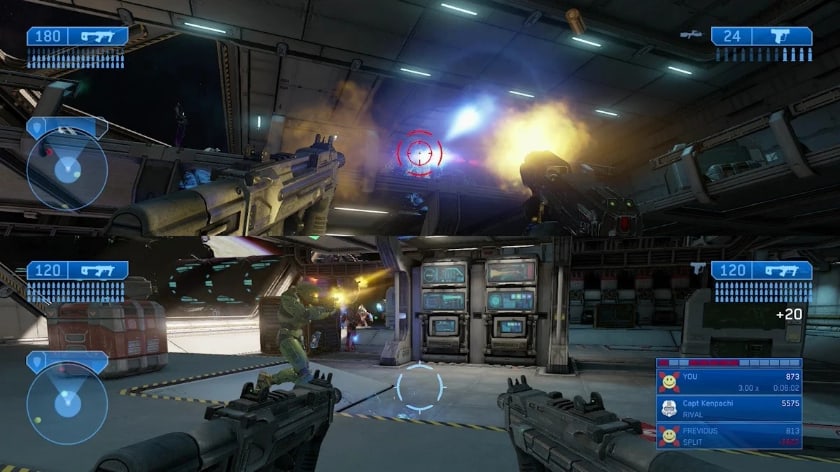 What a game! We’re massive Halo fans and have been playing it since it was first released on the original Xbox way in 2001.

Released for the Xbox One in 2014, Halo: The Master Chief Collection is a roundup of titles from the Halo series.

However, each game in the collection received a graphic update, and Halo: 2 got a complete redesign of its cutscenes and audio.

Upon release, Halo: The Master Chief Collection received positive reviews from critics and is, without a doubt, one of the best split-screen Xbox One games of all time. 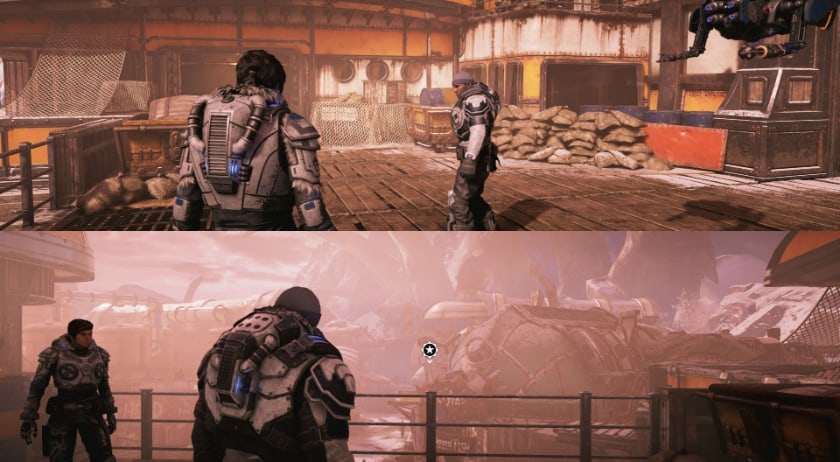 Gears 5 is the fifth and most recent installment in the Gears of War series.

It’s the sequel to Gears of War 4, the ninth-best split-screen Xbox One game, and was released on September 10, 2019.

This third-person shooter follows Kait Diaz as she tries to uncover the roots of her family history.

The game sees the return of Gears of War 4 protagonist, JD Fenix, his best friend, Delmont “Del” Walker, and his father, Marcus Fenix.

Gears 5 has a three-player local split-screen option, as well as an online cooperative mode and a single-player campaign.

After it debuted, the game was praised for its presentation, content, gameplay, and campaign, and was well-received by critics overall. 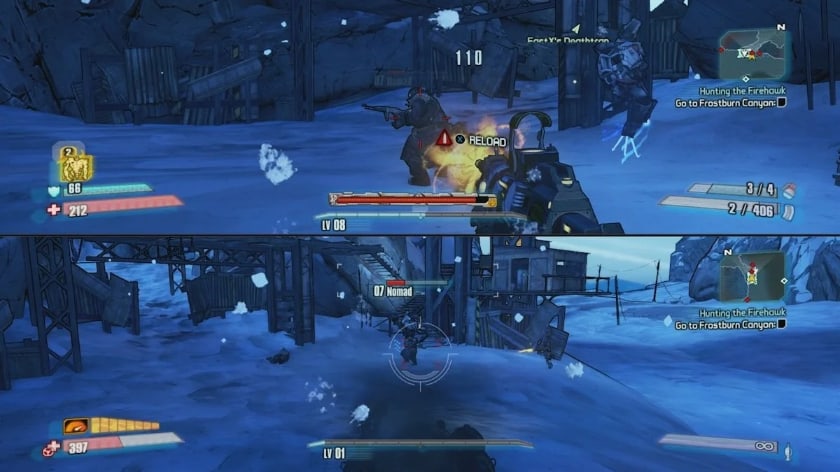 It was developed by Gearbox Software and published by 2K Games for the Xbox One in 2015.

If you’re unfamiliar with Borderlands, it’s a first-person shooter that focuses on a group of “Vault Hunters” who chase down an alien vault on planets that contain hostile wildlife and creatures.

Each game in The Handsome Collection has been remastered to include better graphics and run at 1080p at 60fps.

And, both games are capable of split-screen cooperative multiplayer for up to four players, which is two more than previous versions.

Upon release, Borderlands: The Handsome Collection received positive reviews from critics and was mainly praised for its vast amount of content and its port of Borderlands 2. 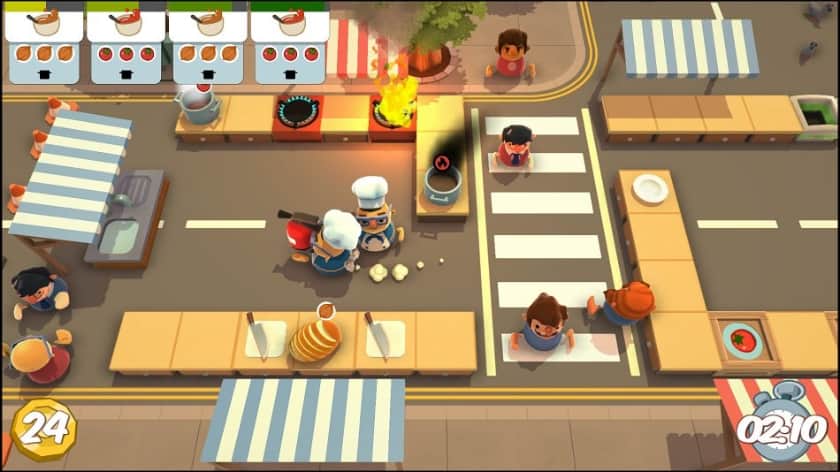 The second best split-screen Xbox One game is Overcooked.

It was developed by Ghost Town Games and published by Team17 for the Xbox One in 2017.

As a player, you’re tasked with controlling several chefs who prepare meals and specific orders for different restaurants.

However, the catch is that you have to do all of this within a specific time limit and while trying to avoid obstacles.

Overcooked is technically a shared-screen experience; however, it’s so good that it had to be on the list, as there’s only one other game that offers a better multiplayer experience, in our opinion, which is coming up next. 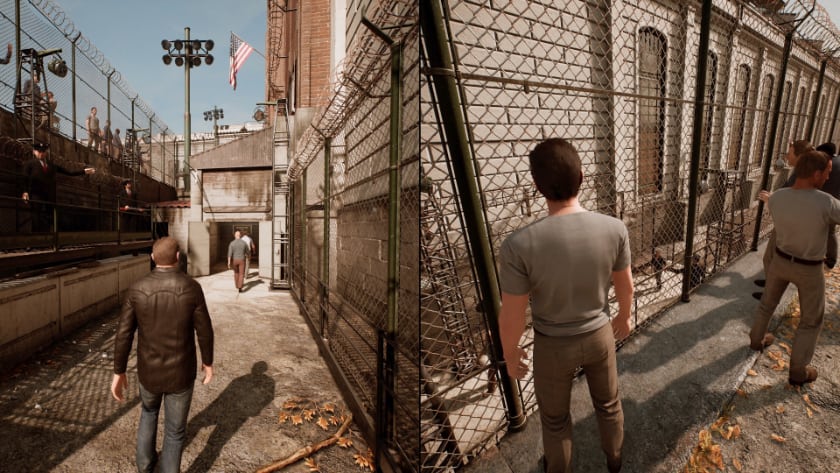 A Way Out is an action-adventure video game that was released for the Xbox One in 2018.

It was developed by Hazelight Studios and was published by Electronic Arts.

The game is played from a third-person perspective and is purposely designed for split-screen cooperative multiplayer-only; therefore, it does not support single-player mode.

A Way Out follows the story of two prison inmates, Leo and Vincent, who try to come up with a plan to break out of prison and elude the authorities.

However, to make that a reality, they need to cooperate, which doesn’t always go to plan.

Since it was released, A Way Out has been nominated for multiple industry awards and won “Best Multiplayer” at the 15th British Academy Games Awards in 2019.

We hope you enjoyed our list of the 15 best split-screen Xbox One games.

They were some pretty neat games, right?!

Well, when we’re in the mood to play split-screen games on Xbox One, we tend to go for Halo: The Master Chief Collection, Diablo 3, and Gears 5.

That’s not to say we don’t indulge in other games on the list, but those are our three favorites.

Here’s a quick recap of the 15 best split-screen Xbox One games.

What’s your favorite split-screen Xbox One game? Leave a comment below.