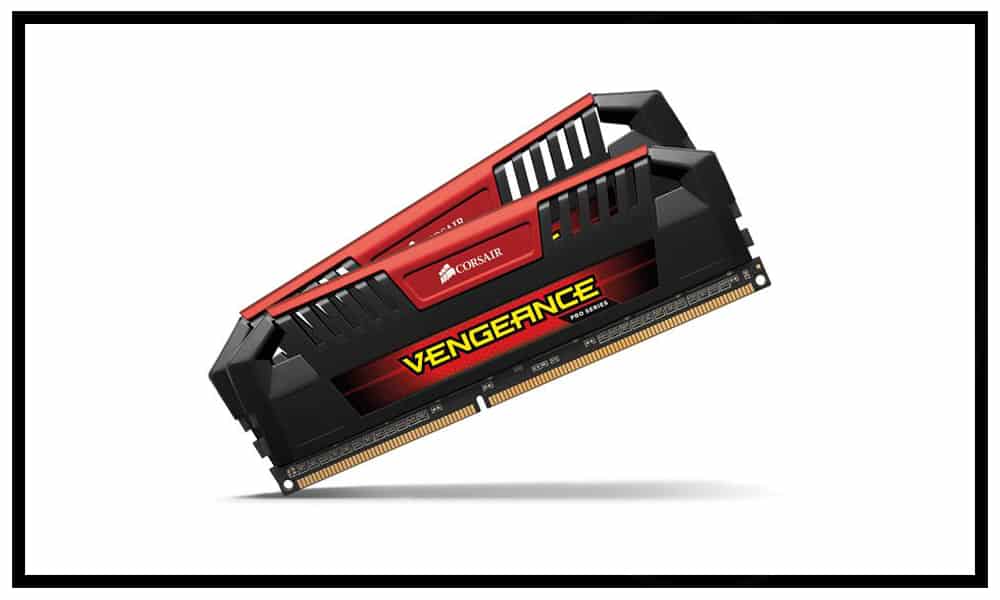 Each and every time a new CPU chipset comes out you can bet there will be a series of other components that will also come around. Just recently, we saw the introduction of the Intel Haswell processors and the new set of chipsets that goes with it. We saw new motherboards, new list of power supplies that support all the lower voltage regulations governing the chipset and we are also seeing new memory kits to address the higher capabilities of this new technology.

One of the companies to hop in the lead when it comes to meeting the specifications of the new chipset is Corsair. If you currently own a Corsair power supply then chances are you are already covered for Haswell. But what if you are currently using Corsair memory, will it still be covered? Yes, if your memory is running at least 1333MHz or higher and in the range of low voltage up to 1.65 volts. But we know Corsair as being one of the front runners when it comes to memory and they never leave anything as is and are considered average. Things are about to get better.

Corsair has just released their newest ram kits called the Vengeance Pro. The new series is designed for the third and fourth-generation Intel users that want the most when it comes to overclocking would certainly love the Corsair Vengeance Pro. This isn’t Corsair’s first memory series to have the name ‘Vengeance’ in them.Some time ago, they launched the standard Vengeance series and with that there are some variations within the series like the Extreme (3000MHz) and the Low Profile modules.

The new ones will sport a new heat spreader design with a more aggressive look. Not only to allow the modules to run cool and perform well but to also look good. So, you get a little of ‘show and go’ with these modules. All the modules come in a back frame but topped with a colored bridge that would either be blue, red, gold or silver. The colors of the heat spreaders do not indicate anything, just a part of a color theme for those that are nitpicky about matching hardware colors.

The aluminum heat spreaders provide superior temperature management and have the aggressive look you want in your gaming rig. XMP 1.3 profiles allow for automatic, reliable overclocking.

They’re available in multiple colors to let you match your Vengeance Pro memory to your system’s color scheme. As a bonus, they’re priced to deliver class-leading value, so you’ll have more room left in your system build budget.

As of now, Corsair is offering Vengeance Pro kits ranging in speeds from 1600MHz to a whooping 2400MHz. At 1600MHz, you get the highest frequency supported by the new Haswell chips. Using any frequency above that will result in overclocking mode on the motherboard. We have yet to find a board that could not support memory frequency up to the 2400MHz rating. Are there some out there? I am sure most of the new boards will be able to support that. However, not everybody or at least the majority for now wouldn’t be thinking of buying and using such memory modules or even consider that idea. Still, it’s likely these kits will become a mainstream in the near future. 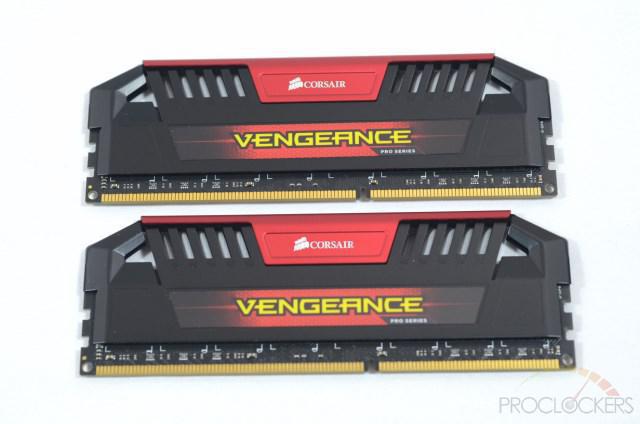 You will not be able to get any single modules of this memory as it only comes in kits of two and four for dual and quad channel specifications. The kit sizes are 8GB, 16GB and 32GB. We all know memory prices are at their lowest right now and prices of these kits reflect that. According to Corsair’s online store, the price range is from $99.99 to $479.99. 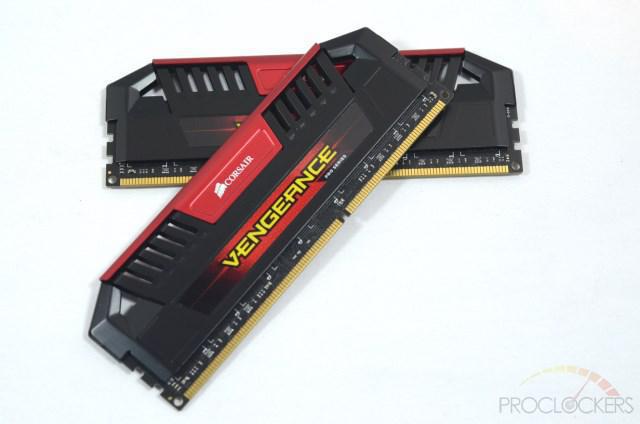 The kit that we will be reviewing here today will be of the faster set available at 2400MHz and consist of two 8GB sticks. The timings are locked in at 10-12-12-31. These timings are pretty good for such a high frequency. 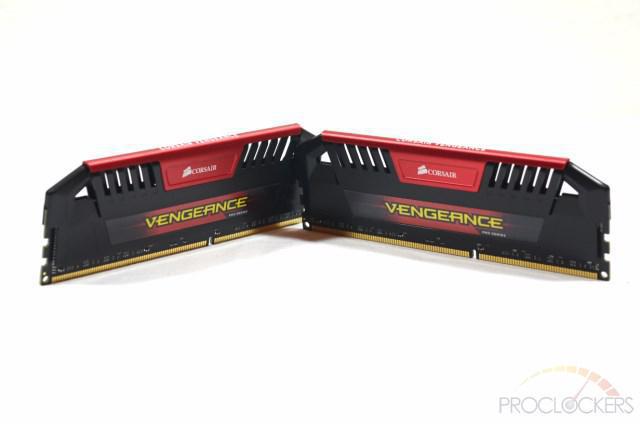 The red and black color theme of these sticks is ideal for many of the higher-end ASUS ROG, Asrock Fatal1ty, MSI Gaming series and EVGA motherboards sharing the same colors. Corsair pretty much has most motherboard color scheme covered with the new Vengeance Pro kits. The blackness of the scheme doesn’t stop with the heat spreaders but goes down to the PCB as well. 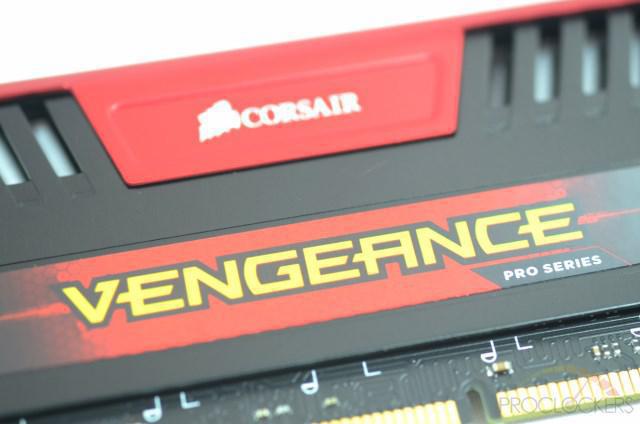 The heat spreaders are of a three-piece design with the third piece (the red part) helping to secure the two side pieces together and this is in conjunction with whatever thermal tape is used underneath the spreaders. 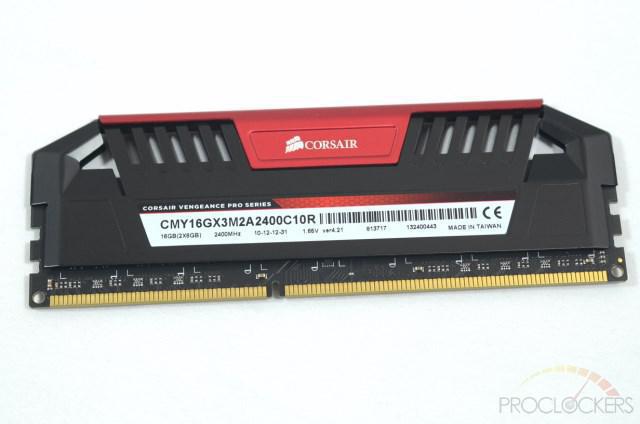 The product label on the side of the kit is very informative. It stated memory size, speed, voltage, timings as well as version number. 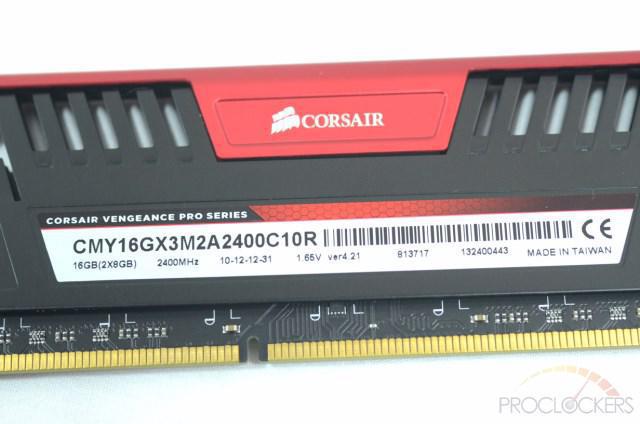 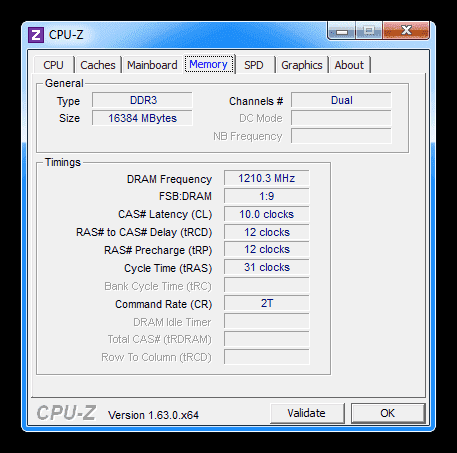 Overclocking the Corsair Vengeance Pro set was a little of an adventure. We took our regular steps of increase the stock XMP setting to the next memory frequency the motherboard supported. In this case that would be 2600MHz which the motherboard responded with a big fat ‘it ain’t happening‘. There are several reasons for this but to decide to take the easy way out and lower back to default settings and play with the BCLK setting. At 110 which was our starting point was a no-go as well. At 108, we got the system to boot and were able to navigate around Windows but four calculations in Super Pi test failed. So, we had to lower if even further until we got to a still respectable 107 (2556MHz). At this point, still using the stock XMP timings, we were able to get a full 32m of Super Pi run. 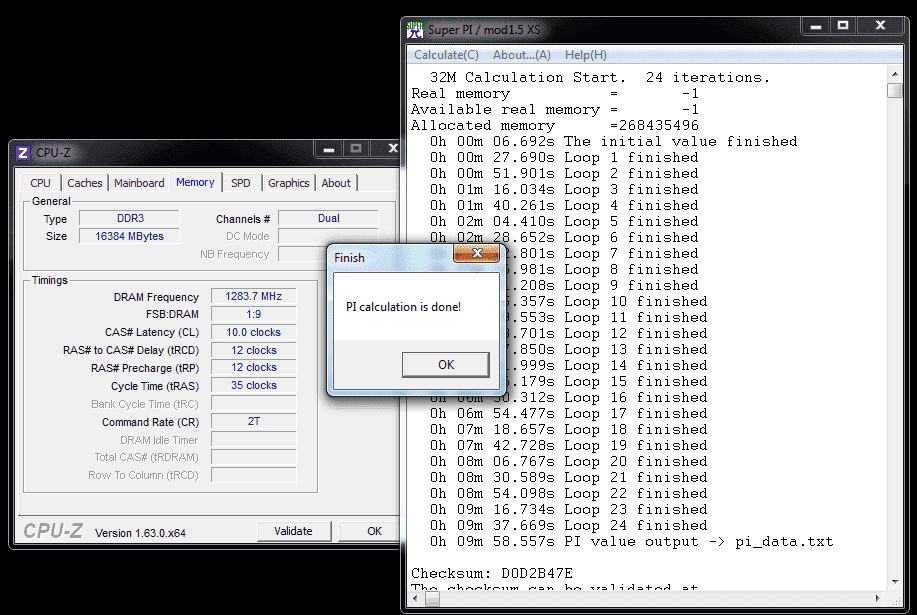 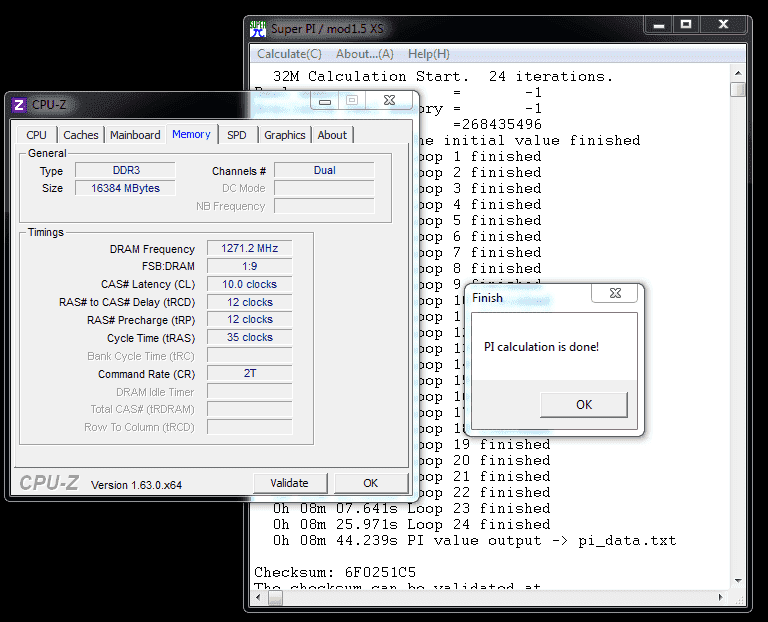 Super PI Modded 1.5
“In August 1995, the calculation of pi up to 4,294,960,000 decimal digits was succeeded by using a supercomputer at the University of Tokyo. The program was written by D.Takahashi in collaboration with Dr.Y.Kanada at the computer center. This record should be the current world record. (Details are shown in the windows help.) This record-breaking program was ported to personal computer environment such as Windows NT and Windows 95. In order to calculate 33.55 million digits, it takes within 3 days with a Pentium 90 MHz, 40 MB main memory and 340 MB available storage.”

Flying Wild Hogs Hard Reset
“Thee world as we know it ceased to exist. Humanity is at the verge of extinction, living in the last closed city of Bezoar. Mankind wages war against the machines controlling vast areas of what became the ‘Barrens’. Machines want to control and assimilate ‘The Sanctuary’ a network that holds billions of digitalized human minds. Our hero, Maj. Fletcher, is a soldier of CLN – a corporation combat unit, established to protect the city. Machines are constantly assaulting the walls of Bezoar. Fletcher moves in when Bezoar’s protective barrier is breached.”

FuturemarkPCMark Vantage
“PCMark Vantage is a PC benchmark suite designed for Windows Vista offering one-click simplicity for casual users and detailed, professional grade testing for industry, press and enthusiasts.
A PCMark score is a measure of your computer’s performance across a variety of common tasks such as viewing and editing photos, video, music and other media, gaming, communications, productivity and security.
From desktops and laptops to workstations and gaming rigs, by comparing your PCMark Vantage score with other similar systems you can find the hardware and software bottlenecks that stop you getting more from your PC.”

MaxxMEM 2
“Is the *little brother of MaxxPI², it contains the same Memorybenchmark routine as MaxxPI² does.
So your reaced results will be comparable to Memory / Latency benchmarks done by MaxxPI².”

The new Corsair Vengeance Pro series is aimed at the enthusiasts that wish to boost their system’s performance in several aspects. An increase in ram will allow the user’s system to run much smoother while able to accomplish more operations at one time. This is just a mild reason from jumping from an 8GB kit to 16GB one. But when it comes to jumping frequencies, this is where only the real enthusiasts and overclockers see the difference. It may not be in the system’s performance but in his/her heart. Paying more cash for faster ram is like buying a new set of drag radials, whatever it takes to get that extra .1 second in the quarter mile. Well, that would be in the case of doing benchmark tests.

At 2400MHz, one could simply say enable the default XMP setting and leave it. That is for the weak at heart. With no added voltage or even touching the timings we were able to get the 16GB kit up to 2566MHz. I am quite positive that more voltage or even loosen the timings would gain a higher frequency but lower timings plus a good overclock is better in our opinion.

I like what Corsair did with the new heat spreaders. They look better. They are not very tall granted they are not short either. We did have issues with clearance under the fan of the Scythe cooler we were using but we find that very minor. One thing I found out about the original Vengeance is the heat spreaders had a tendency to separate after a period of time. That would be happening with the new Corsair Vengeance Pro because of the added plate across the top.

At $190 (lowest price found) these puppies aren’t cheap. There are others out there with a lower cost but you may have to sacrifice timing and overclocking.