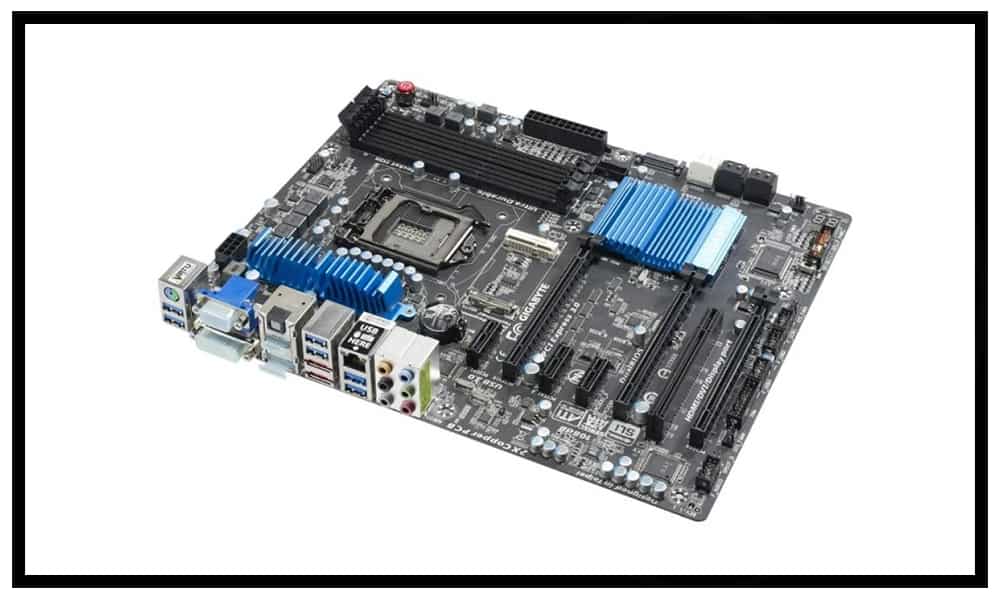 The introduction of the Ivy Bridge technology bought to live a while new era of motherboards. Many of the motherboards we have been reading about are the ones that many would consider out of their price range. Ones that have a lot of features but features that many not need or want. That is why many of us look to companies like Gigabyte that offers several motherboards based on the same chipset. Giving us a pick of the features we want and leaving off the ones we don’t need. Basically giving us a choice.

Gigabyte currently offers thirteen motherboards based on the Intel’s latest Ivy Bridge chipset. Ranging from the GA-Z77-D3 to the new G1.Sniper 3. Offering features ranging from firewire to Wi-Fi. The Z77X-UD3H offers much of the features of the higher end boards but at a great $160 price point. Crossfire, SLI, four DIMM slots, SATA III and USB 3.0 are just a few of the options this new board has. But we want to know is overclocking an invisible no added cost to manufacturing feature of this board? Hmmmmm, we will find out.

Gigabyte’s take on the Z77X-UD3H

I just love the look that motherboards are taking. No longer do we see the broad range of colors on each motherboard. Two or three colors now dominate the scheme on most of today’s main boards. We can’t say that Gigabyte started this but I am glad they joined in. granted their teal color motherboards are no eyesore but the black ones just look better. The UD3H we are looking at today adds some blue in the mix via the active heat sink attachments.

The slots of the UD3H are plentiful and are very beneficial if used to their full capacity. The PCIe are yielding to the PCIe 3.0 standards when the motherboard is mated with an Ivy Bridge processor and PCIe 2.0 with a Sandy Bridge CPU.This was one of the added features of the chipset and the new processors. There are a total of three full length PCIe slots running at x16, x8 and x4 bandwidths. The Crossfire and SLI functions will drop the first two slots to x8/x8. There are three x1 slots and a standard PCI slot. The latter is controlled by an ITE IT8892 chip.

Between the PCIe slots and the CPU support is a mini PCIe for housing a mSATA solid state drive. This is great for those that want to take advantage of Intel’s Smart Response and Rapid Start features.

The Z77 chipset is based heavily on the Z68 with some added benefits. One of the biggest additions was USB 3.0, PCIe 3.0 and naïve support for the Ivy Bridge processor. All the Sandy Bridge processors from the i3 to the i7 can be used as well as the current i5 and i7 from Ivy Bridge. The board uses a total of nine digital power phases to deliver the proper of power to the CPU and its different voltage points.

There is no secret the Z77 chipset supports dual channel DDR3 memory. Gigabyte’s website states the board support ram up to 2400 MHz overclocked. This is great for some of the higher speed memory that is increasing on the market. We will find out if this board really will do 2400 MHz because we have had troubles with this speed of ram and the Asrock Z77 Extreme6 we tested not long ago.

For a mainstream motherboard the UD3H does have a lot of ‘extras’. I am not talking about chipset features for add-ons. First, there is the big red power button and two smaller CLR CMOS and reset buttons. And then there are voltage reading points. And if you were to mis-flash your BIOS for some reason there is a backup BIOS to get you back up and running.

The board support two SATA III and four SATA III devices with the aid of the Z77’s controller. Many of Gigabyte’s other boards as well as some manufacturers will add more ports but it is through the implementing of some type of extra bridge. This is not the case here but six ports is usually enough for most individuals.

During our overclocking session we find that the limitation of our CPU was 4800MHz at 1.4v. Even upping the voltage to 1.45 did not help. Maybe under water cooling things could have been better. At 4900 MHz the system got into Windows and at 5000 MHz the system really tried to boot but stuck at the BIOS.

wPrime
wPrime is a leading multithreaded benchmark for x86 processors that tests your processor performance by calculating square roots with a recursive call of Newton’s method for estimating functions, with f(x)=x2-k, where k is the number we’re sqrting, until Sgn(f(x)/f'(x)) does not equal that of the previous iteration, starting with an estimation of k/2. It then uses an iterative calling of the estimation method a set amount of times to increase the accuracy of the results. It then confirms that n(k)2=k to ensure the calculation was correct. It repeats this for all numbers from 1 to the requested maximum.

Futuremark PCMark Vantage
3DMark Vantage is a PC benchmark suite designed to test the DirectX10 performance of your graphics card. We’ve been making 3DMark for over 10 years, with each new edition using the latest 3D technology to determine real-world performance.

SiSoftware Sandra 2011
We are pleased to announce the launch of SiSoftware Sandra 2011, the latest version of our award-winning utility, which includes remote analysis, benchmarking and diagnostic features for PCs, servers, mobile devices and networks.
At SiSoftware we strive to ensure that we give our users the best software experience. We observe the industry, try to predict where trends are going, but more than that: we also come up with new ideas on how to measure performance. SiSoftware works with all major hardware vendors to ensure we can accurately measure, report and present performance in the most accurate and informative way.
A year ago, SiSoftware released Sandra 2010 with full support for Windows 7; in the 18 months since the launch of Windows 7, more than ever before we have seen the line blur between PC and entertainment hubs. Two months ago we released a Blu-Ray benchmark, now we have added a brand-new Media Transcoding benchmark using the new Media Foundation of Windows 7. We have also added yet another benchmark (GP Cryptography) which allows direct comparison of CPU performance (using crypto instruction sets) and GPGPU/GPCPU/GPAPU performance.

Super PI Modded 1.5
In August 1995, the calculation of pi up to 4,294,960,000 decimal digits was succeeded by using a supercomputer at the University of Tokyo. The program was written by D.Takahashi in collaboration with Dr.Y.Kanada at the computer center. This record should be the current world record. (Details are shown in the windows help.) This record-breaking program was ported to personal computer environment such as Windows NT and Windows 95. In order to calculate 33.55 million digits, it takes within 3 days with a Pentium 90 MHz, 40 MB main memory and 340 MB available storage.

Geekbench 2.3.1
Geekbench provides a comprehensive set of benchmarks engineered to quickly and accurately measure processor and memory performance. Designed to make benchmarks easy to run and easy to understand, Geekbench takes the guesswork out of producing robust and reliable benchmark results.

MaxxMEM 2
“Is the *little brother of MaxxPI², it contains the same Memorybenchmark routine as MaxxPI² does. So your reaced results will be comparable to Memory / Latency benchmarks done by MaxxPI².”

Futuremark 3DMark 11
Your PC’s performance is determined by the interactions between different hardware components, the operating system and the type and amount of software running. A benchmark provides a set of performance tests that can be repeated with a high degree of accuracy on a wide range of computer hardware.
3DMark 11 is the latest version of the world’s most popular benchmark for measuring the graphics performance of gaming PCs.
Designed for testing DirectX 11 hardware running on Windows 7 and Windows Vista the benchmark includes six all new benchmark tests that make extensive use of all the new features in DirectX 11 including tessellation, compute shaders and multi-threading.
After running the tests 3DMark gives your system a score with larger numbers indicating better performance. Trusted by gamers worldwide to give accurate and unbiased results, 3DMark 11 is the best way to test DirectX 11 under game-like loads.

Square Enix Final Fantasy XiV
FINAL FANTASY XIV takes the first intrepid steps into an unknown realm, and in doing soa new place for adventurers of all creeds to call home is born — Eorzea.
In the world of Hydaelyn, the term Eorzea denotes the geographical region comprised of the continent of ldenard and its surrounding islands, as well as the civilization which spawned there. Calling the area home are several independent city-states,the most notable being Limsa Lominsa, bustling port and pirate hub;Ul’dah, a desert city rich in mineral wealth; Gridania, nested deep within an ageless wood; and Ishgard, bastion atop the mountains.

I knew that I was going to like the GigabyteZ77X-UD3H from the first thing I fired it up. The reason that I knew this was because it was able to run my G.Skill 2400MHz memory without an issue. This was something the Asrock Z77 Extreme6 was not able to do in its current status. And the rest was candy from that point on. Next, was the overclocking. I know that much of the overclocking results of the Ivy Bridge processor are mostly up to the CPU. But you have to have a motherboard that is up to the task. Our first attempt was at 4500MHz and it was no problem at all with this combination. And it just went up from there.

For a ‘mainstream’ motherboard this baby has a lot to offer. First, it begins with all the PCIe slots on the board. The UD3H has a total of three but only supports two card SLI and Crossfire configurations. This is more than enough for someone looking to spend not too much money on a motherboard. I don’t think many people looking to spend $160 on a motherboard is looking to do triple or quad cards. Chances are they would just elect to get one faster GPU.

With the cost of solid state drives quickly dropping in price, the mPCIe slot in the middle of the board is a good idea. Making it much easier to take advantage of Intel’s new cache features without taking up another drive bay or SATA port. The speed benefits will be seen in many areas.

The greatest safety feature for a motherboard is having an option if you happen to go wrong through the BIOS flashing process. This motherboard offers two BIOS, one being backup BIOS just for that reason. Many of us don’t have that awkward feeling anymore but just in case it’s there.