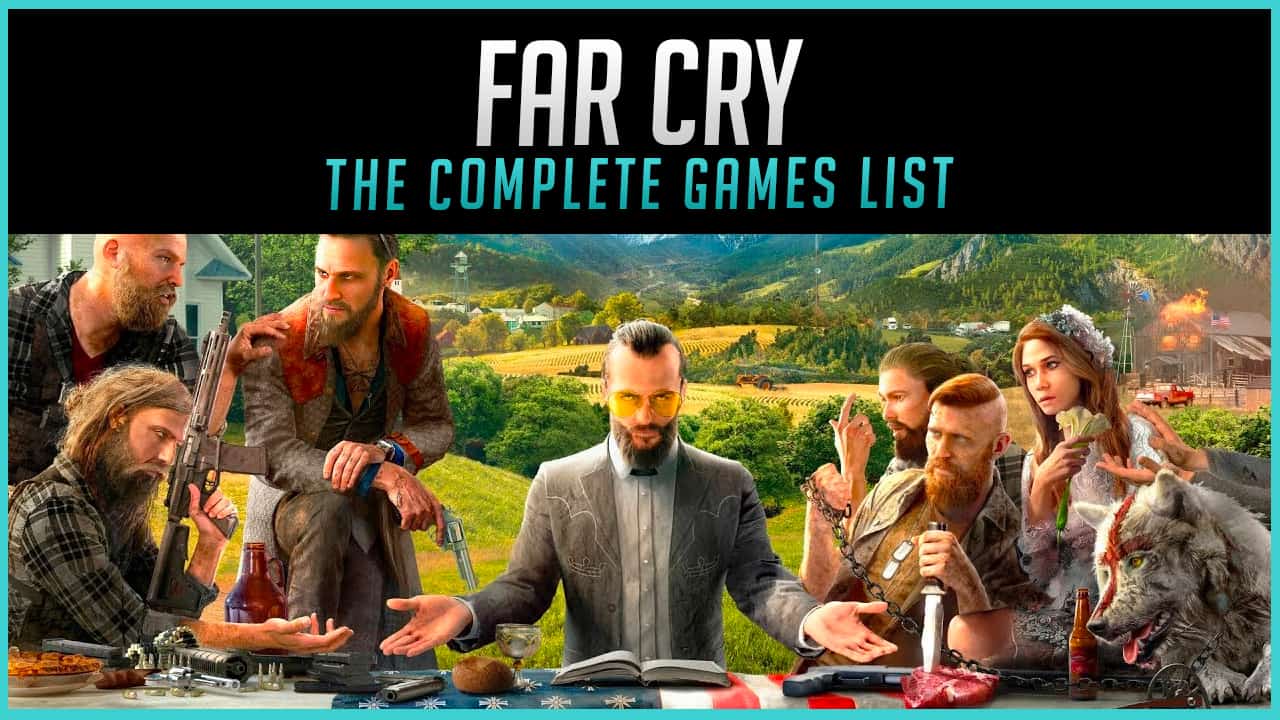 Boasting some of the most exotic locations any game has to offer, the Far Cry franchise is right up there with the best of them.

So, we thought we’d list all the Far Cry games in chronological order, to help make your life easier when deciding which ones you want to play.

Don’t worry if you haven’t played Far Cry before, as our games list will act as an eye-opener for you!

Now, let’s crack on with the complete Far Cry games list in order.

The list of Far Cry games and figures mentioned below are from various sources around the web, such as Game Informer, Ubisoft & Wikipedia. 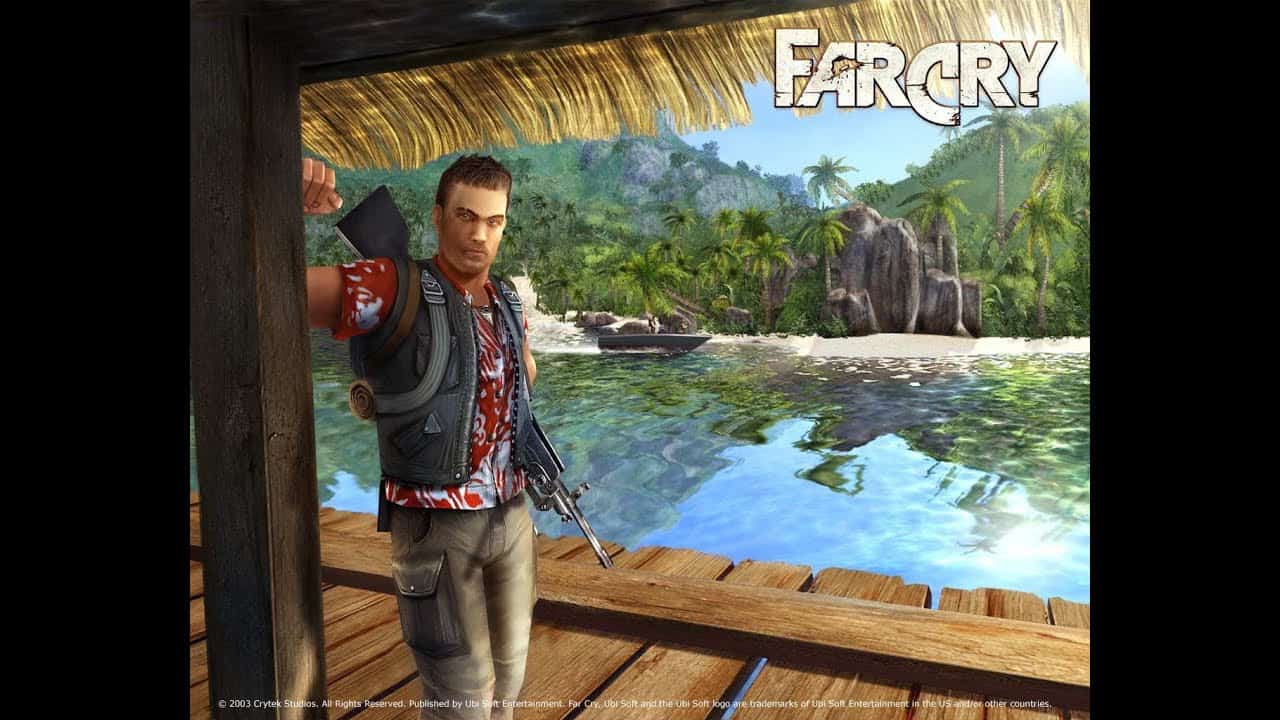 Kicking off our complete Far Cry games list is the first game in the franchise, Far Cry, which was released in 2004.

Far Cry is a first-person shooter video game that was developed by Crytek and published by Ubisoft for Microsoft Windows and later released on the PlayStation 3 and Xbox 360.

The game follows Jack Carver, an ex-special forces soldier that’s on a mission to locate a journalist that went missing after mercenaries attacked their boat. It’s set on a strange tropical archipelago and played from a first-person perspective.

Players can use a variety of weapons and tools to aid their mission, and the open maps allow players to work their way through each objective in several different ways.

Upon release, Far Cry was praised for its visuals, gameplay, and freedom within its open world. The game became a commercial success and selling over 730,000 units within four months of release, eventually going on to sell 2.5 million units worldwide. 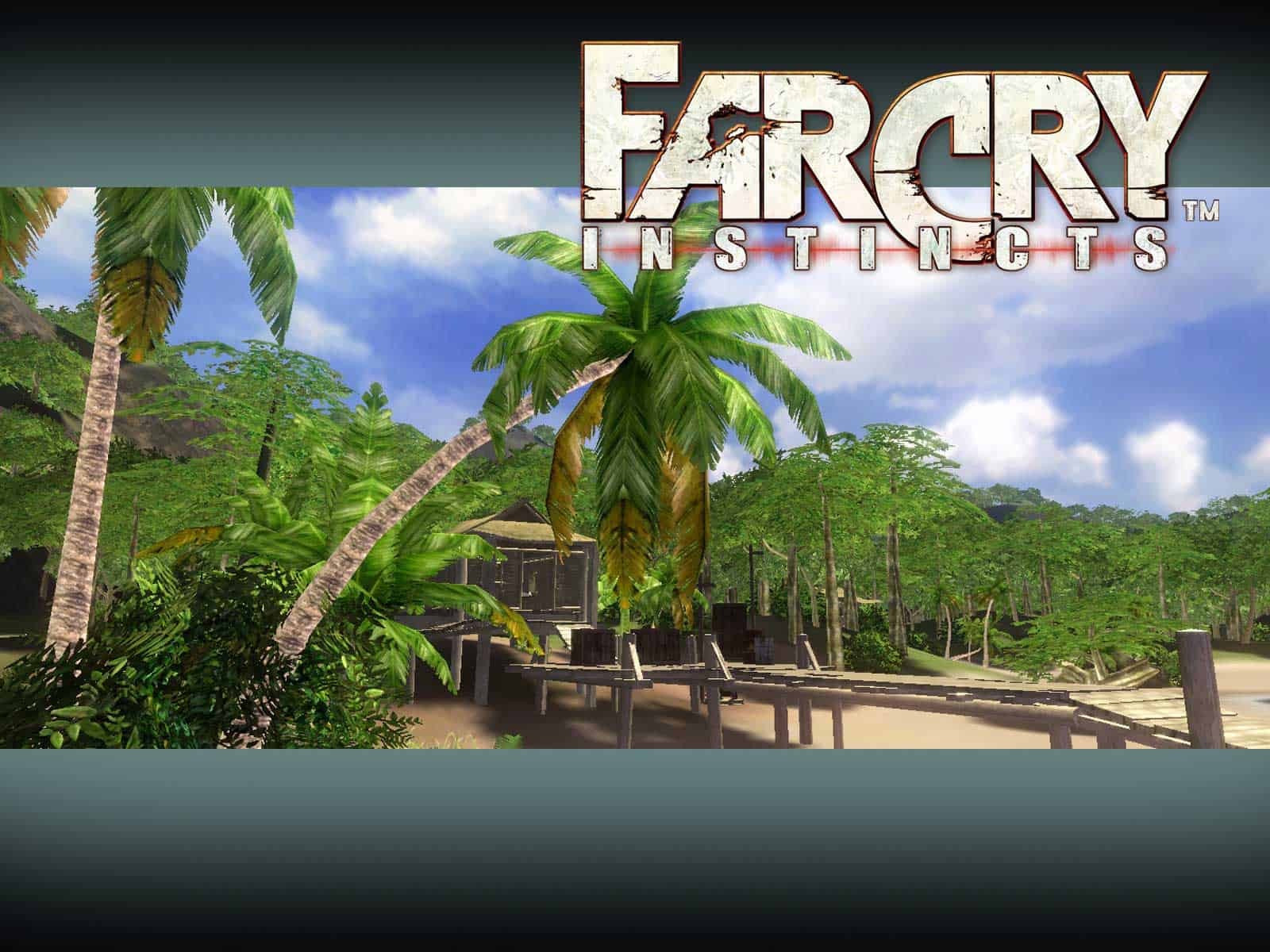 Far Cry Instincts is the next installment in the series and was developed and published by Ubisoft for the Xbox in 2005.

It’s a remake of the original Microsoft Windows version but a lot more linear, due to the limitations of the Xbox’s processing power.

The game follows the same storyline as the original, where players control ex-special forces soldier, Jack Carver, guiding him through a series of missions and objectives to rescue “Cortez,” a member of the CIA that was sent to save a mysterious voice who calls himself “Doyle.”

Upon release, Far Cry Instincts received generally positive reviews from critics, and the game was commercially successful enough that Ubisoft decided to release a sequel, which is the next installment on the list. 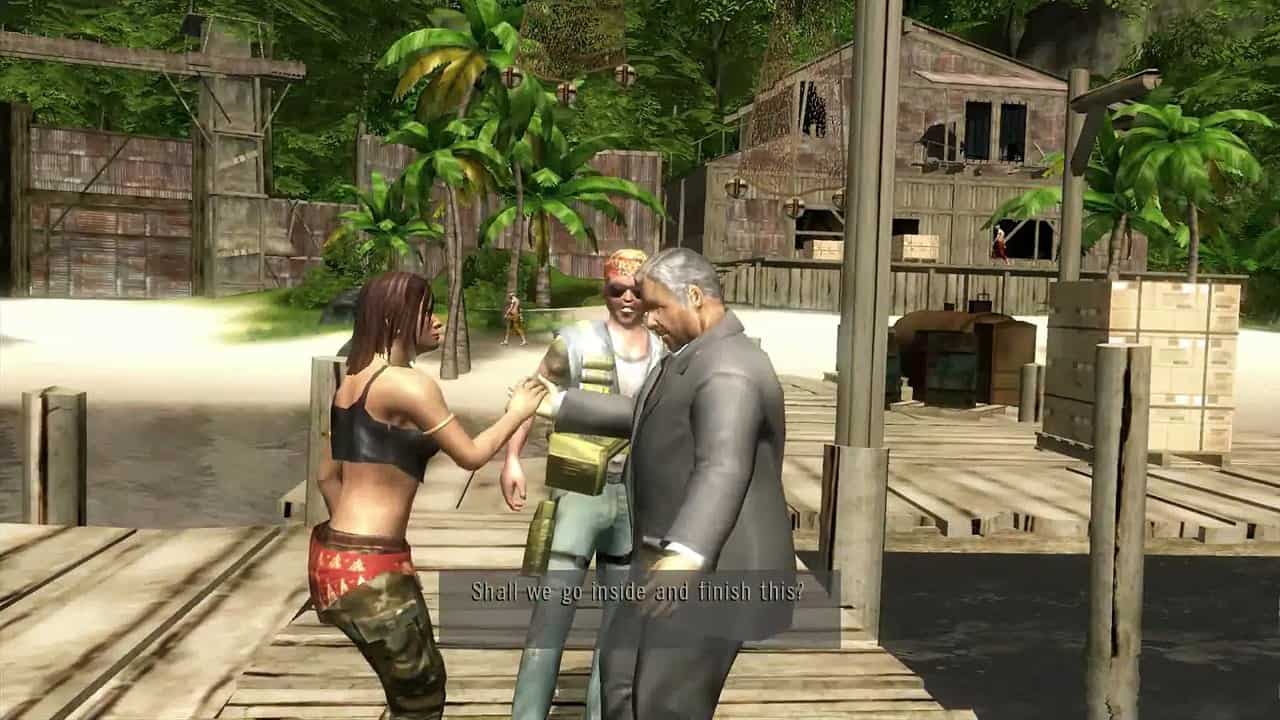 The game picks up some time after the events of Instincts, and Jack, the series protagonist, is hired by a woman called Kade to help facilitate an arms deal between the government of Micronesia and some conspicuous pirates.

However, things don’t go entirely to plan, and the deal falls under attack by rebels. Jack ends up becoming framed for the attack and has to work his way out of it, whichever way he can.

Evolution includes an assortment of new weapons and vehicles, as well as an expanded map-maker, and an extra multiplayer mode.

If you were thinking of playing any maps that were created on Instincts, then think again, as the Xbox version can not be moved over to the 360 version.

Far Cry Instincts: Evolution received mixed reviews upon release and was developed and published by Ubisoft. 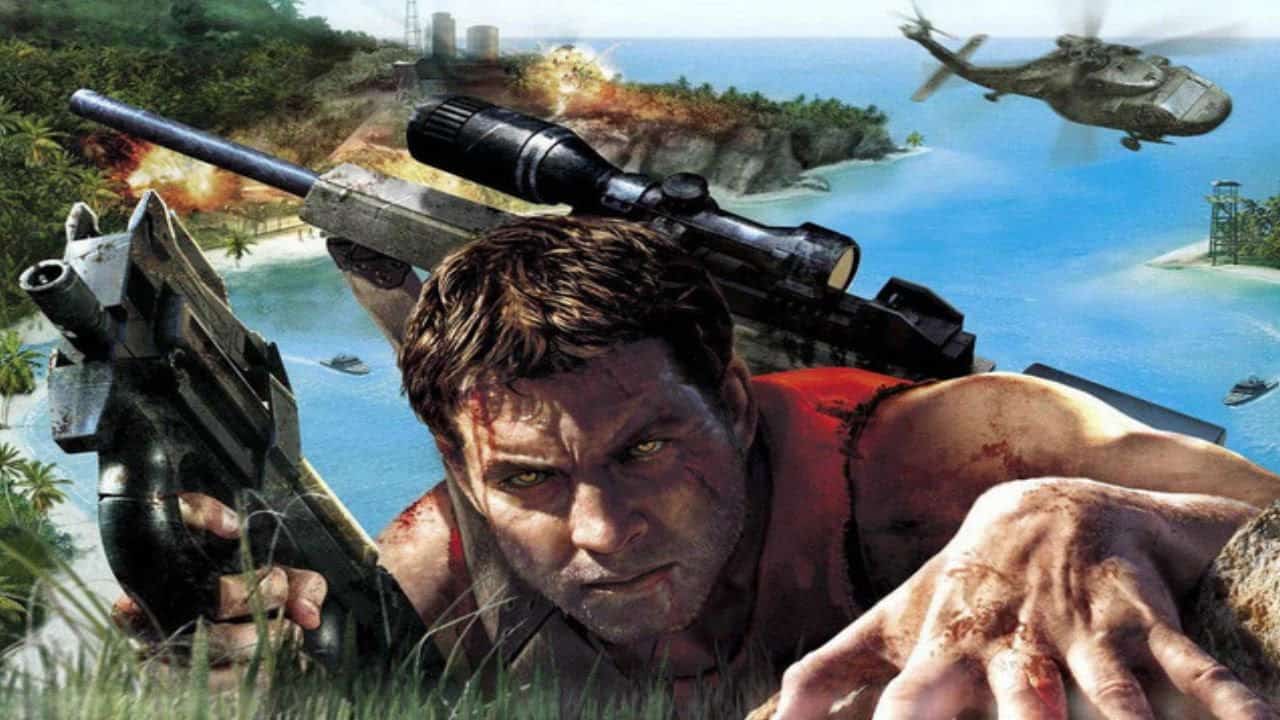 Far Cry Instincts: Predator was released on the same day as Evolution, and was developed and published by Ubisoft.

This installment includes updated graphically enhanced versions of both Far Cry Instincts and Evolution. It comes with a new map editor that allows players to create and customize their maps.

This installment aimed to bring gamers the best graphical experience possible, and do justice to the Far Cry universe in an optimized, high-definition gaming environment.

Upon release, Predator was met with favorable reviews from critics and scored reasonable well on Metacritic overall. 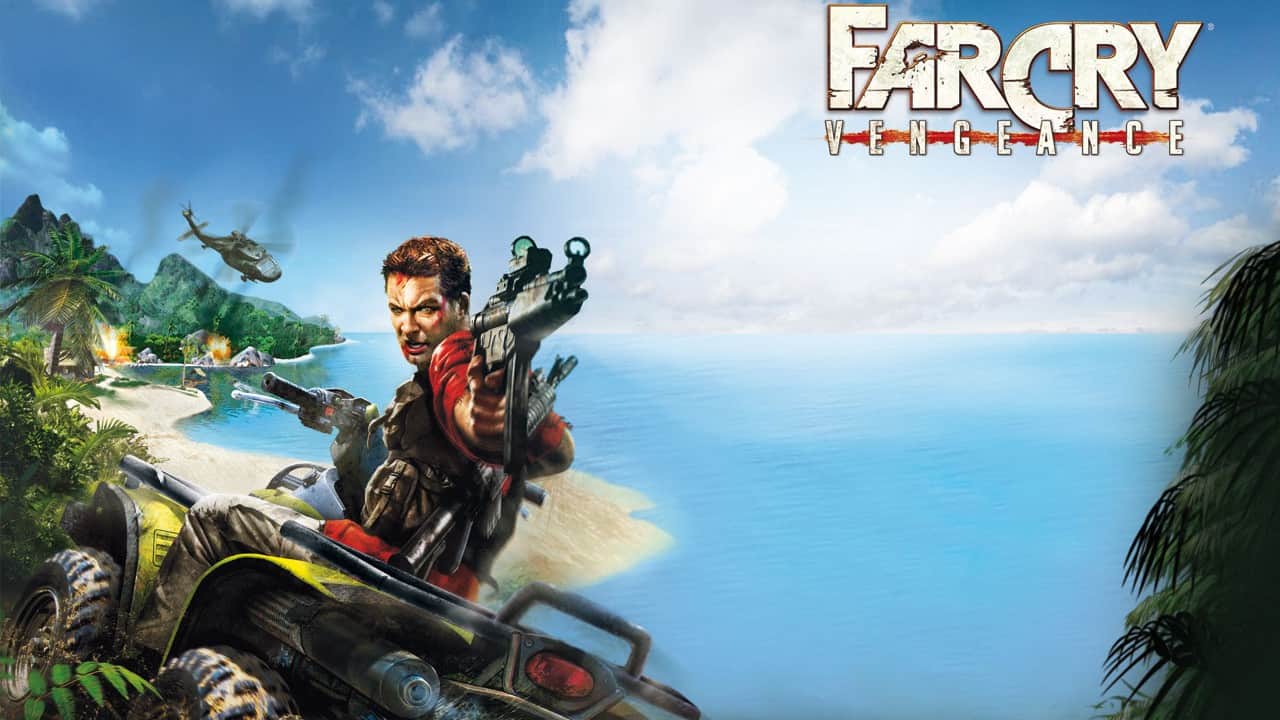 Far Cry Vengeance is the next installment in the series and was released in the same year as the previous two Instinct titles.

The first-person shooter was developed by Ubisoft Montreal and published by Ubisoft for the Nintendo Wii and is a remake of Far Cry Instincts: Evolution.

The game features several new weapons, vehicles, and controls, as well as three new levels for players to complete.

It follows the series protagonist once again as he goes off in pursuit of Kade, who’s been captured by the rebels, but he’s eventually met with an unexpected twist, as he finds out Kade is working with Semeru and the rebels, so he needs to beat them to escape.

Far Cry Vengeance didn’t receive the best of reviews from critics upon release, with criticism directed toward the graphics, FMVs, and poor AI on the enemies.

However, IGN said that it was “fundamentally a fun shooter, despite not looking half as good as the year-old Xbox version.” 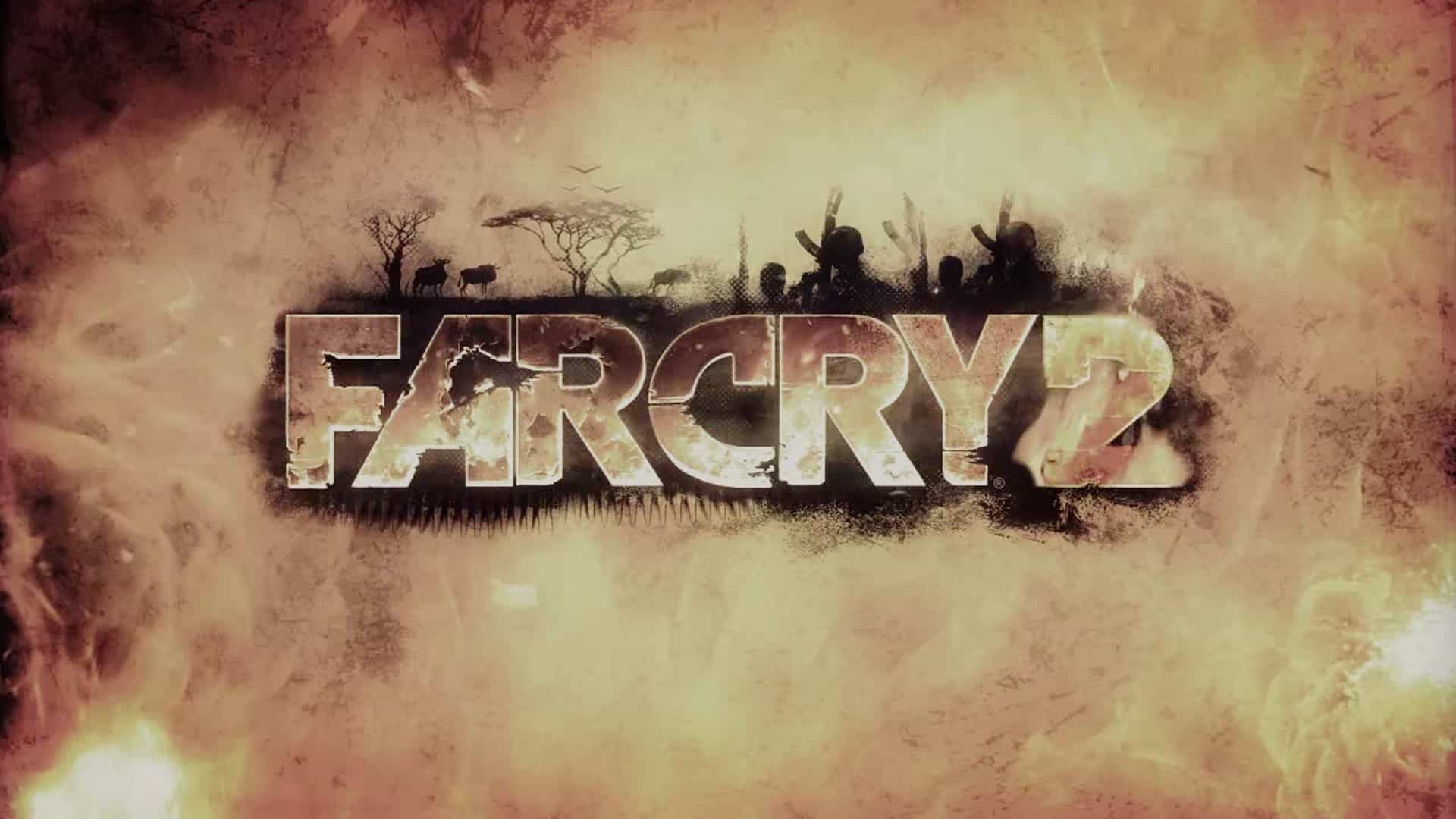 Next up on our complete Far Cry Games list is Far Cry 2.

Developed by Ubisoft Montreal and published by Ubisoft, the game is the second main installment in the Far Cry Series, preceding 2004’s Far Cry.

In this installment, we see new characters and settings, plus a completely new style of gameplay that offers players more freedom when exploring the deserts, jungles, and savannas of Africa.

Far Cry 2 takes place during a civil war in modern-day Central Africa. Players control a mercenary who’s in pursuit of “The Jackal,” a notorious arms dealer, so that he can bring him to justice for his crimes against humanity.

The game is played from a first-person perspective and is available in single-player and multiplayer.

Despite any negative criticism, Far Cry 2 went on to sell more than three million copies worldwide. 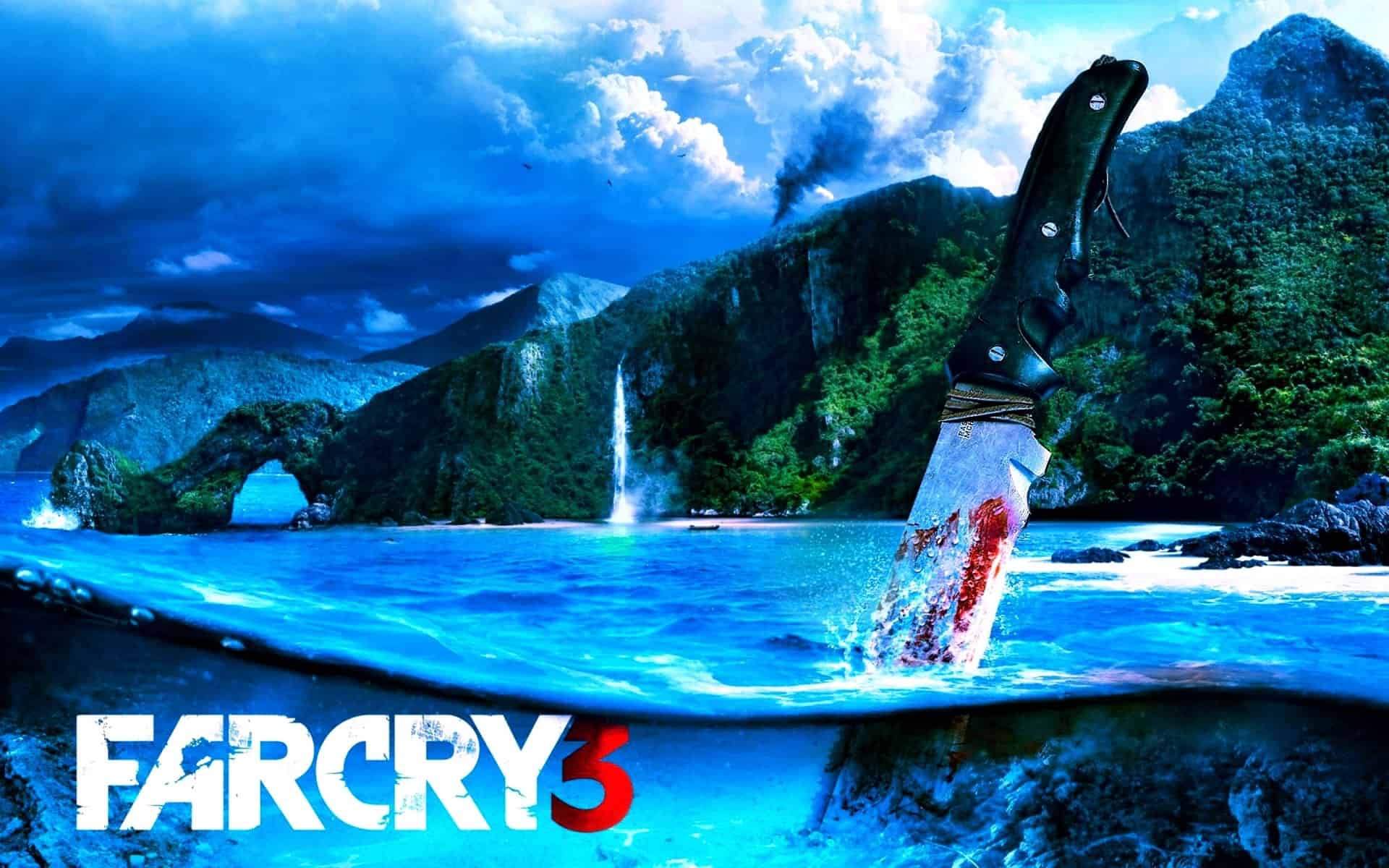 Far Cry 3 is the third main installment in the Far Cry series and was developed and published by Ubisoft.

The first-person shooter takes place on the Rook Islands, a fictional tropical archipelago, where players are free to explore as much as they like.

While on vacation on the Rook Islands, protagonist Jason Brody ends up having to rescue his friends from pirates and escape safely from the island.

The gameplay focuses on a combination of combat and exploration, and players can choose from an assortment of weapons to defend themselves from wild animals and human enemies.

Far Cry 3 was met with critical acclaim upon release, receiving praise for its characters, world design, gameplay, and progression. It was nominated for several industry awards, including “Game of the Year.”

The next installment on our complete Far Cry games list is Far Cry 3: Blood Dragon.

This 2013 first-person shooter was developed by Ubisoft Montreal and published by Ubisoft and is the standalone expansion to Far Cry 3.

The game was released for the PlayStation 3, Microsoft Windows, and Xbox 360, and is the eighth overall installment in the Far Cry franchise.

Blood Dragon is a parody of 1980s action films, video games, and cartoons that all takes place on a retro-futuristic open-world island.

Players take control of Rex “Power” Colt, a military cyborg Sergeant in a world that’s suffering the aftermath of a nuclear war. Rex goes on a series of missions to “get the girl, kill the bad guys, and save the world.” 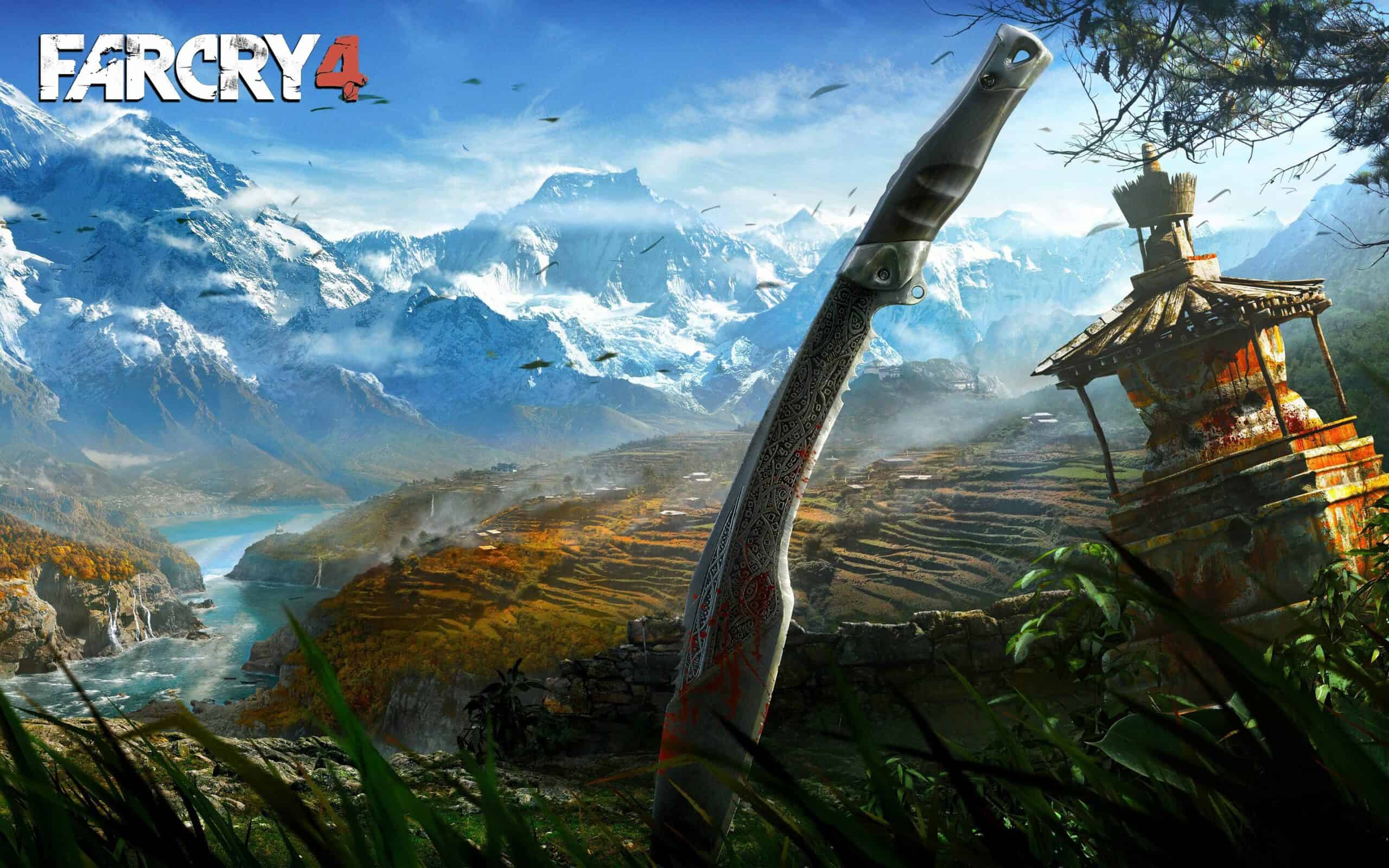 The fourth Far Cry installment on our games list is Far Cry 4.

It’s the fourth installment in the Far Cry series and the successor to Far Cry 3.

The game takes place in the fictional Himalayan country of Kyrat, and follows Ajay Ghale, as he finds himself caught up in a civil war between Kyrat’s Royal Army and the Golden Path.

Like most games in the series, gameplay focuses on combat and exploration, and players use a variety of weapons to fend off human enemies and threatening wildlife.

Upon release, critics praised the game for its open-world design, visuals, soundtrack, and characters, with particular attention focused toward the antagonist, Pagan Min.

Far Cry 4 was a commercial success and became the biggest launch in the franchise’s history, selling over seven million copies by the end of 2014. 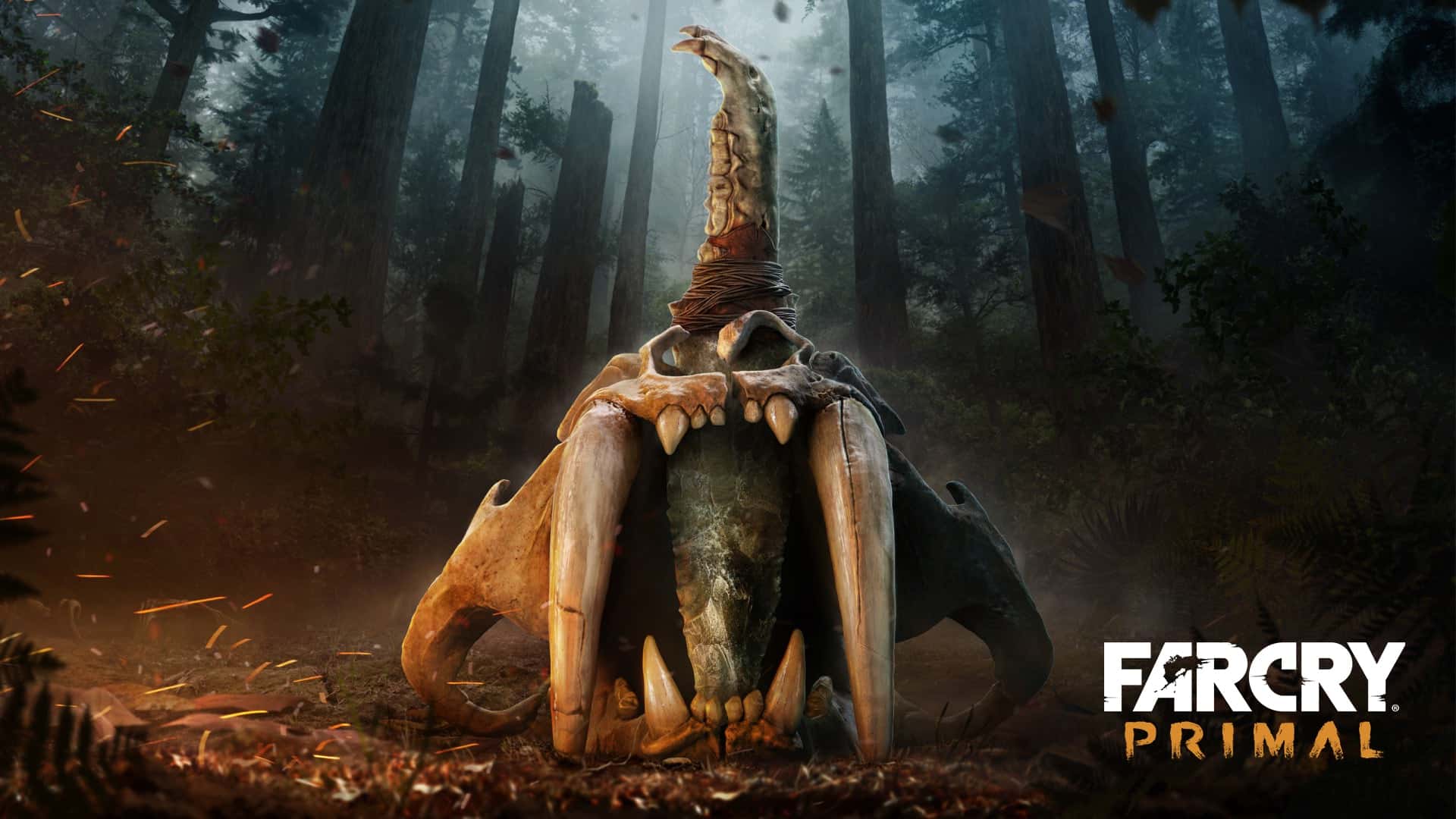 Far Cry Primal was released worldwide for the PlayStation 4 and Xbox One in February 2016 and is a direct spin-off of the main Far Cry series.

Primal is the first Far Cry game to be set in pre-modern times and follows the protagonist, Takkar, who’s on a mission to become the leader of his tribe, so he will do whatever is necessary to make that happen.

The game is played in an open world environment and from a first-person perspective.

You’ll find no use of traditional gunplay and vehicle gameplay in this installment, as the game goes back to basics, allowing players access to melee weapons, like clubs and spears, and ranged weapons, such as bows and slings.

These come in handy when fighting off the dangerous predators and hostile tribes that occupy the lands.

Upon release, Far Cry Primal was met with mixed reviews from critics and became the best-selling game in the UK in its first week of release, debuting at No.1 in the UK retail software sales charts. 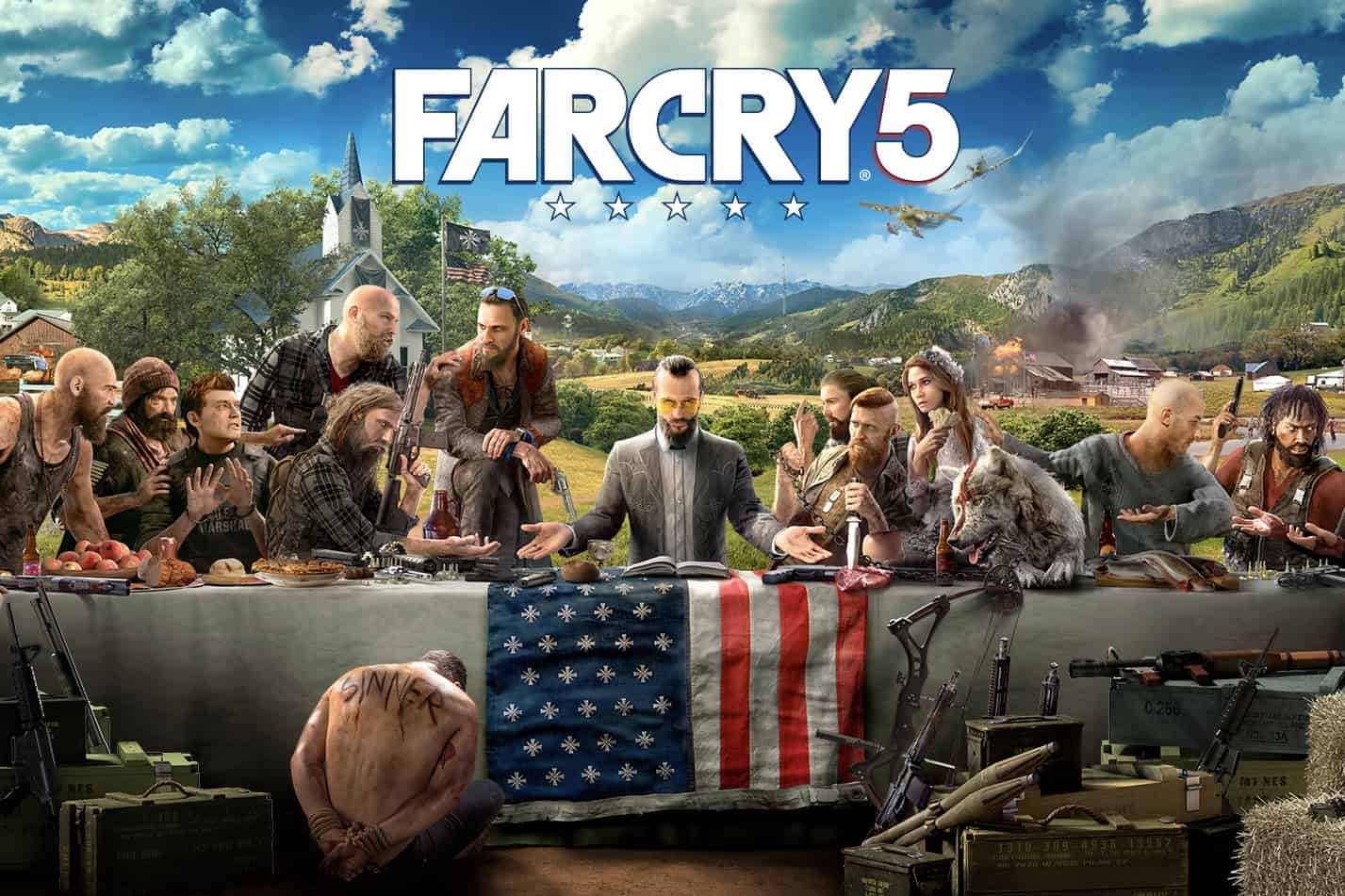 The game was developed by Ubisoft Toronto and published by Ubisoft in 2018 for Microsoft Windows, PlayStation 4, and Xbox One.

This installment takes place in a fictional region of Montana called “Hope County,” and follows the story of a young junior deputy sheriff who tries to put an end to the doomsday cult that’s taken over the country and threatens to make life unbearable for all its citizens.

As you’d expect from a Far Cry installment, gameplay focuses on combat and exploration once again, and players must defend themselves from wild animals and enemy soldiers using an array of exotic weapons.

Upon release, Far Cry 5 was met with mostly positive reviews from critics and became a commercial success, grossing over $310 million in its first week of sales. 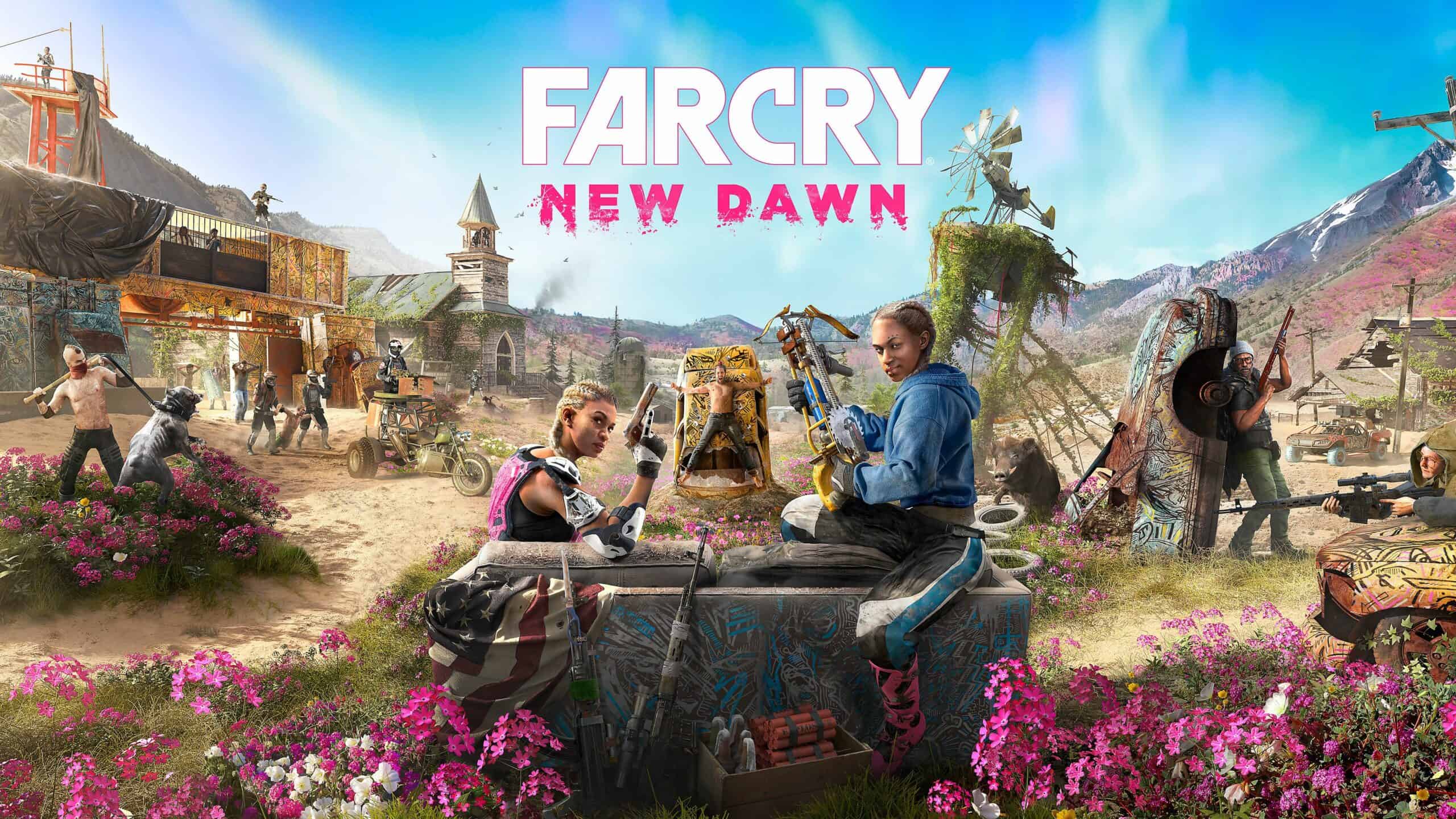 Far Cry: New Dawn is the second most recent installment in the Far Cry series and is a narrative sequel to Far Cry 5.

The game was developed by Ubisoft Montreal and published by Ubisoft in 2019. It featured numerous highlights and pre-existing gameplay elements from the Far Cry series, like a gigantic open world, co-op/AI companions, and capturing outposts.

However, it also introduces new elements from RPG gameplay, such as increased reliance on crafting from limited supplies and an upgradeable home base.

The main storyline is set seventeen years after the events of Far Cry 5, when the survivors of “the Collapse,” which devastated the world, take it upon themselves to rebuild Hope County.

Far Cry 5 received mixed reviews from critics upon release and had lower sales overall in comparison to Far Cry Primal and Far Cry 5.

However, it still went on to become the best-selling retail game in the UK in its first week of release and was nominated for several industry awards. 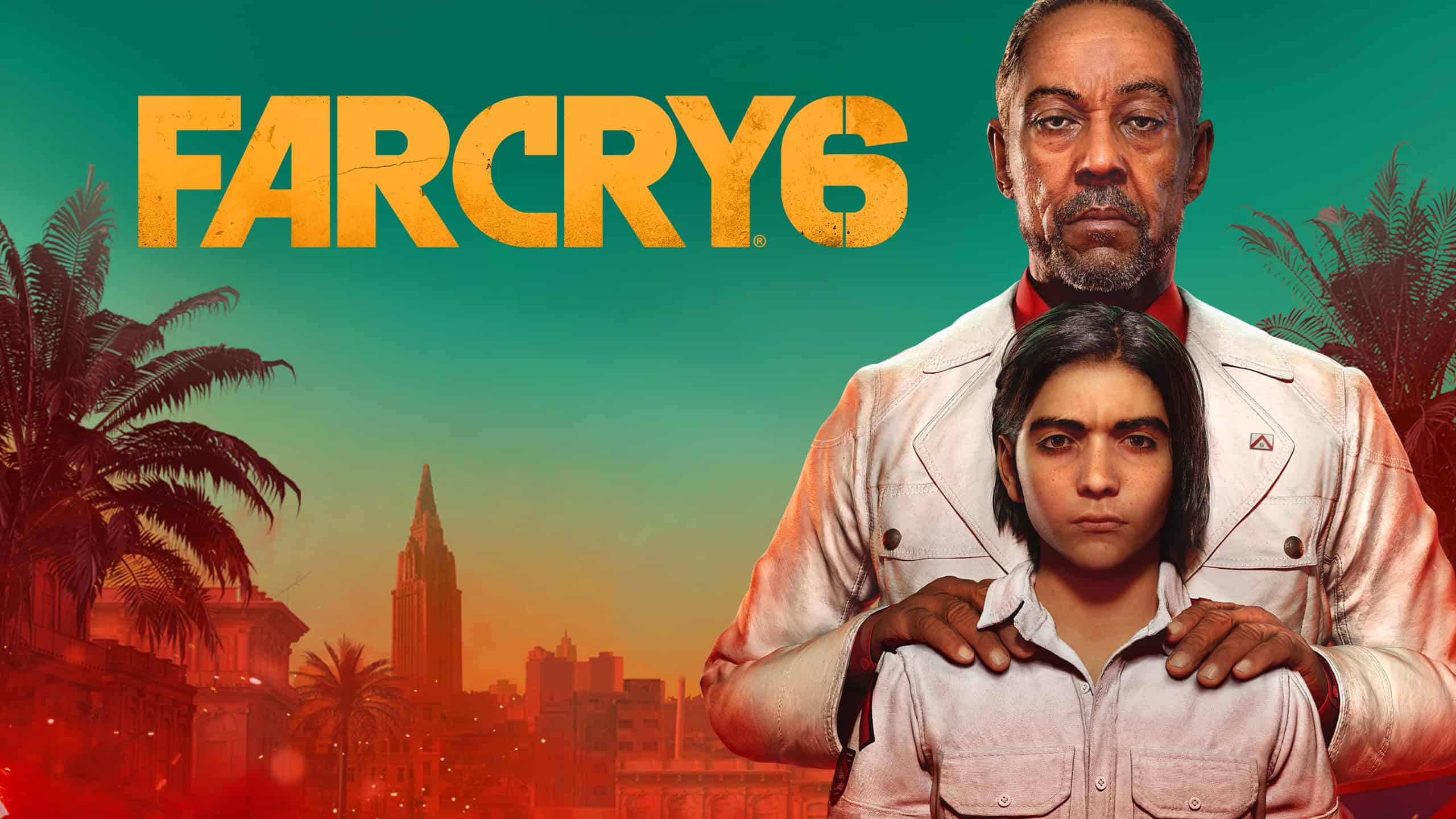 The latest Far Cry game in the series is Far Cry 6, released by Ubisoft in October 2021.

El Presidente is training his son, Diego, to take after him in his ruling of Yara.

The main protagonist, Dani Rojas, works with the Guerillas to stop El Presidente and take back the island of Yara.

We hope you enjoyed our complete Far Cry games list in order.

Being a relative newcomer to the first-person shooter scene, in comparison to other franchises we’ve mentioned, Far Cry hasn’t done too badly over the years, in terms of game releases.

If we decide to play Far Cry, over GTA or Need for Speed, we’re opting for Far Cry 5 without a doubt!

Check out our list of the best Far Cry games ranked!

Here’s a quick recap of the complete Far Cry games list in order:

What’s your favorite Far Cry game? Leave a comment below.