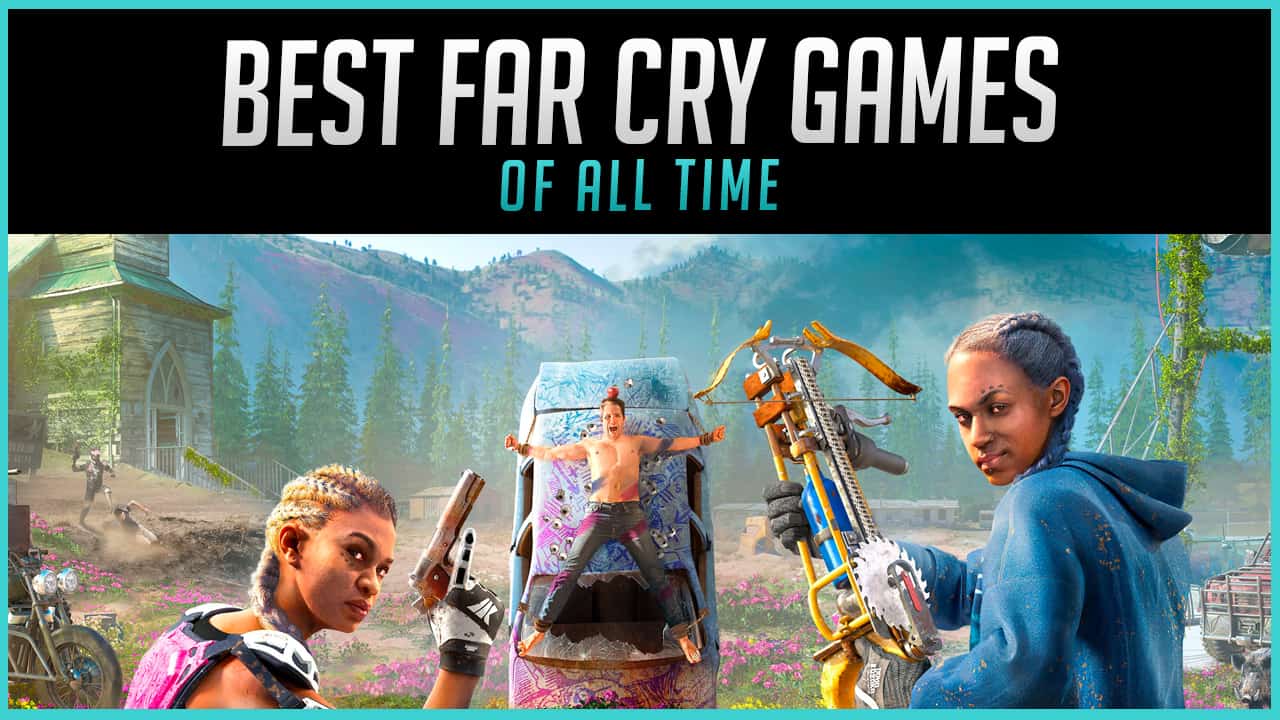 Want to know what the best Far Cry games of all time are?

Well, look no further as we’ve put together a comprehensive list of the best Far Cry games, ranked in order from worst to best!

So, have a read through, choose which ones tickle your fancy and start playing!

WARNING: Set aside at least a few hours when you first start playing, as Far Cry is one hell of an addictive game.

Here’s a list of the 10 best Far Cry games of all time.

The 10 Best Far Cry Games of All Time Ranked

The list of Far Cry games and figures mentioned below have been compiled from various sources around the web, such as Game Informer, Tom’s Guide & Gamer Revolution.

These are the 10 best Far Cry games of all time:

Kicking off our list of the best Far Cry game of all time is the 2006 title, Far Cry: Vengeance.

The first person shooter was developed by Ubisoft Montreal and published by Ubisoft and is an exclusive title to the Nintendo Wii games console.

Vengeance is a remake of the previous Xbox title, Far Cry Instincts: Evolution and offers players three brand new levels to explore, as well as new weapons, controls, and vehicles.

As it’s on the Nintendo Wii, you’re able to take full advantage of the Wii Remote and Nunchuk attachment, using them to do all kinds of things like jump, aim, and attack.

Upon release, Far Cry: Vengeance received mixed reviews, with critics commenting on its mediocre graphics, AI, and FMV’s. However, praise was given for its controls and gameplay.

Far Cry: Vengeance features both a single-player and multiplayer mode, and although it’s not the best Far Cry game on the list, it’s still fun to play with friends, as the Wii is all about the multiplayer!

Coming in at number nine is Far Cry: Instincts.

It was developed and published by Ubisoft for the Xbox and released worldwide in 2005.

Instincts is a remake of the original Microsoft Windows Far Cry game and features new multiplayer modes, weapons, and abilities.

The first-person shooter features both a single-player and multiplayer mode, making it accessible to play with friends, in-person, and or online.

Far Cry is the first installment in the Far Cry series and was developed by Crytek and published by Ubisoft in 2004.

Far Cry is about an ex-special forces soldier, Jack Craver, who’s on a mission to locate a journalist that’s gone missing after her boat was captured and destroyed by mercenaries.

You’ll be able to use a variety of weaponry, vehicles, tools, and abilities to complete your mission.

Far Cry was officially released in 2004 on Microsoft Windows and published over a decade later on the PlayStation 3 and Xbox 360.

After it was released, Far Cry was praised for its freedom, visuals, and gameplay, and, is considered a commercial success due to selling over 730,000 copies within its first four months and over 2.5 million units throughout its lifetime.

If you’re into Far Cry, and I assume you’re as you’re reading this, then give this one a shot, as there’s nothing like playing the original of any game franchise.

The seventh-best Far Cry game of all time is the second installment in the franchise, Far Cry 2.

Like the previous game on the list, Far Cry 2 is a first-person shooter that’s available to play in both single-player and multiplayer modes.

It was released in 2008 by Ubisoft and is dubbed by the developers as the true sequel to Far Cry.

This time around, the game features new characters, settings, and gameplay, which provides players with more opportunities to explore different landscapes like deserts and jungles.

It takes place in a modern-day Central African nation during a civil war, and players are in control of a mercenary that must track down a notorious arms dealer, who goes by the name: “The Jackal.”

A cool feature about this game is that it’s backward compatible with Xbox One, which means you’re able to play it on older game consoles.

Far Cry 2 received praise for its open-ended gameplay, visuals and AI, and game settings upon release.

Coming in at number six on our list is Far Cry 5.

Ubisoft Montreal and Ubisoft Toronto developed the game. Ubisoft published it in 2008.

It’s the fifth main installment in the Far Cry series and is the successor to 2014s Far Cry 4.

In this installment, players take control of an unnamed junior deputy sheriff who’s trapped in Hope County by a doomsday cult and tries to do everything in his power to break free from their grasp and stop them once and for all.

You’ll be battling with enemy soldiers and several different wild animals, but you’ll have a ton of kickass weapons at your disposal, so they shouldn’t be too much of a problem.

Far Cry 5 can be played in either single-player or multiplayer and is available to play on Microsoft Windows, Xbox One, and PlayStation 4 game consoles.

It’s considered to be a commercial success, grossing over $310 million in its first week of release and became the fastest-selling game in the franchise.

The fifth-best Far Cry game of all time is New Dawn.

Developed by Ubisoft Montreal and published by Ubisoft in 2019, New Dawn is a spin-off of the main Far Cry series and a narrative sequel to Far Cry 5.

However, the storyline is set seventeen years after the events of Far Cry 5, and players are tasked with rebuilding the community in Hope City after the effects of the nuclear exchange that devasted the county, known as the “The Collapse.”

New Dawn features many of the same gameplay features as Far Cry 5, like a large open-world environment, outpost capturing, and AI or co-operative companions.

It was released for the PlayStation 4 and Xbox One in February 2019 and was met with positive reviews from critics overall.

New Dawn was the best-selling retail game in the UK in its opening week!

Far Cry Primal is the fourth-best Far Cry game of all time and was released worldwide for the PlayStation 4, Microsoft Windows, and Xbox One on February 23, 2016.

It was developed by Ubisoft Montreal and published by Ubisoft and is another spin-off of the main Far Cry series.

In this installment, players follow the story of Takkar, an unarmed hunter that quickly rises through the ranks to become the leader of his tribe.

This action-adventure game is set in an open-world environment and played in the first-person perspective.

Unlike previous versions of Far Cry, the game is set in prehistoric times, and access to all traditional Far Cry weaponry and vehicles has been removed. Instead, players must use melee weapons like spears, clubs, bows, and slings to defeat their enemies.

The games concept and design received praise upon release, and Far Cry Primal debuted at No.1 in the UK software charts in its opening week.

The third best Far Cry game of all time is Blood Dragon.

Released in 2003, Far Cry 3: Blood Dragon is a first-person shooter developed by Ubisoft Montreal and published by Ubisoft.

Blood Dragon is the eighth installment in the Far Cry franchise and the natural expansion to Far Cry 3.

The game takes place on a retro-futuristic open world environment island and is a parody of 1980s cartoons, action movies, and video games.

Blood Dragon received positive reviews by critics and won the VGX award for the best DLC.

The game went on to become the fastest-selling downloadable game in Ubisoft history, selling over one million copies by the end of 2013.

Far Cry 4 is the second-best Far Cry game of all time.

It’s the fourth main installment in the Far Cry series and the direct sequel to 2012s Far Cry 3.

This time around, the game takes place in a fictional Himalayan country called Kyrat. Players follow the story of AJ Ghale, a young Kyrati-American, who’s caught up in a civil war between Kyrats Royal Army and a rebel movement called Golden Path.

The game focuses on exploration and combat, and you’re able to use an array of weapons and abilities to destroy enemy soldiers and dangerous wildlife.

Far Cry 4 was met with a positive response from critics and praised for its open-world design, visuals, characters, and soundtrack.

Far Cry 4 received the Best Shooter Award from IGN in 2015.

Coming in at number one and claiming the title of the best Far Cry game of all time is Far Cry 3.

Released in 2012, this first-person shooter is the third main installment in the Far Cry franchise and takes place on the fictional Rook Islands, a tropical archipelago that can be explored freely by all players.

Like most of the other titles in the franchise, gameplay focuses on combat and exploration and provides players with a vast choice of weapons to defeat human enemies and hostile wildlife.

Players control Jason Brody, who’s trying to track down pirates that have kidnapped his friends and then make a hasty escape from the island and its inhabitants.

After being released in 2012 on the PlayStation 3, Microsoft Windows and Xbox 360, Far Cry 3 received critical acclaim and has sold almost ten million copies worldwide to date.

Far Cry 3 was nominated for several industry awards, including Game of The Year and Best Shooter, by numerous different gaming publications.

We hope you enjoyed our list of the 10 best Far Cry games of all time.

Far Cry 3 and 4 are super addictive and occupy most of our time when we sit down to play.

So, if you’re going to start playing any of these Far Cry games, then follow our lead and go with 3 or 4.

You won’t be disappointed!

We’ve also published an article on the complete Far Cry games list that you might want to read.

Here’s a quick recap of the 10 best Far Cry games of all time:

What’s your favorite Far Cry Game? Leave a comment below.