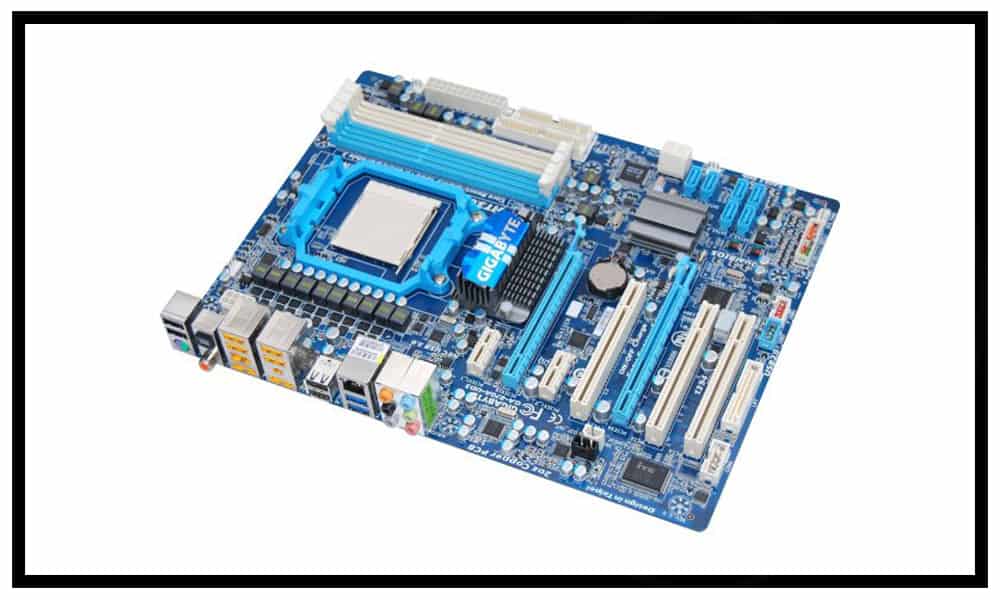 Introduction to the Gigabyte GA-870A-UD3

AMD hit it big when it came to the new 890FX chipset. Rave reviews filled the internet once the motherboards featuring this new and improved chipset hit the market. We even got the chance to take a like at one thanks to our friends at Gigabyte. The chipsets were aimed at the gamers and enthusiasts that wanted the most from the AMD new Phenom X6 and other higher end processors.

The new Gigabyte 870A-UD3 can do all this plus more. The introduction of the 870A-UD3 means you can have a very nice motherboard with all the latest features and not pay an arm and a leg for it. The board offers the end user the newest USB 3.0 and SATA III, raid support, four DIMM slots along with the typical Gigabyte good looks.

The 870 chipset maybe aimed at the person looking for a lower end motherboard but it offers the user much more. We started this article classifying the board as an entry model, which it is. But the 870A-UD3 does not offer you Crossfire but does offer high speed memory support and decent overclocking for those that wish to take their systems to the next level at another time.

Being a product of Gigabyte we all know that the board would be built around a light blue PCB. This is what we have come to recognize Gigabyte motherboards. And the rest of the color scheme flows sweetly as the 870A has the blue and white traditional slots, connectors and plugs. Also, equipped with Gigabyte’s Ultra Durable 3 Technology the 870A will run at a more stable and lower temperature due to the use of copper in each motherboard.

We will begin with the cooling aspect of the 870A which is very moderate but sufficient. The 870 North Bridge and the 850 South Bridge are both cooled passively. The designs of the heat sinks are great and are not very tall standing approximately ¾ off the surface of the motherboard. Allowing enough clearance for lower sitting heat sinks to be seat with ease. The heat sinks are not connected via a heat pipe that we have seen in many of the other Gigabyte motherboards. Gigabyte elected not the cooling the CPU/power mosfets of the 870A-UD3. Those may or may not affect the overclocking of the motherboard but we will find out in the overclocking section of this review.

When it comes down to the expansion slots of the 870A we see traits of the 890FXA. First off are the dual PCIe full length slots. At first look you will instantly realize this motherboard will support Crossfire in the form of dual cards. Unlike the 890FX, the 870 chipset support dual 8x bandwidth when both slots are in use not dual 16x of the 890FX. Dual the two 16x PCIe slots are a single 1x and a standard PCI slot giving plenty of room to Crossfire two cards.

The 870A supports up to DDR3 1866MHz (OC) ram in each of the four banks. A total of 16GB can be used when divided by the four slots. Dual channel compatibility is represented by the usage of two different slots. Sitting towards the edge of the board next to the DIMM slots are the main ATX power connector, IDE and floppy plugs.

Unlike many of the Intel based motherboards we have reviewed AMD offering has as many as six SATA III connections and the Gigabyte 870A is no different. These six connectors are controlled via the 850 South Bridge and has support for SATA RAID 0, RAID 1, RAID5, RAID 10, and JBOD.  While the lone two white SATA II plugs are controlled by the additional Gigabyte SATA2 chip and has support for SATA RAID 0 and RAID 1 and JBOD. Our only knock against the layout of this board was not all SATA ports were in the desired 90 degree angle, only the two SATA II.

Sticking out the rear of the motherboard is a fully loaded I/O panel. We have a single PS/2 port which can service mice and keyboards, a total of ten USB port which eight are of the 2.0 standard while the other two are 3.0. Like many manufacturers two of the USB ports are also eSATA ports which run at 3Gb/s. For audio distribution there are several optical, S/PDIF and standard jacks. A nice feature to see on a low cost motherboard like the 870A is the addition of firewire in the form of four and six pin.

Futuremark PCMark Vantage
3DMark Vantage is a PC benchmark suite designed to test the DirectX10 performance of your graphics card. We’ve been making 3DMark for over 10 years, with each new edition using the latest 3D technology to determine real-world performance.

Futuremark 3DMark Vantage
3DMark Vantage is a PC benchmark suite designed to test the DirectX10 performance of your graphics card. We’ve been making 3DMark for over 10 years, with each new edition using the latest 3D technology to determine real-world performance.

A 3DMark score is an overall measure of your system’s 3D gaming capabilities, based on comprehensive real-time 3D graphics and processor tests. By comparing your score with those submitted by millions of other gamers you can see how your gaming rig performs, making it easier to choose the most effective upgrades or finding other ways to optimize your system.

3DMark is widely used by the PC industry, press and media as well as individual users and gamers, for comparing performance levels between whole systems or even specific components

SiSoftware Sandra Lite 2007 SP1
SiSoftware has announced the availability of Service Release 2 (SR2) for SiSoftware Sandra 2005, the latest version of its award-winning utility. The focus of this service release has been improved support, compatibility and reliability rather than new features. We have been working closely with more hardware vendors than before to be able to bring greater direct support of an increased market share of commodity and server technologies.

Maxon Cinebench
CINEBENCH is a real-world test suite that assesses your computer’s performance capabilities. MAXON CINEBENCH is based on MAXON’s award-winning animation software CINEMA 4D, which is used extensively by studios and production houses worldwide for 3D content creation. MAXON software has been used in blockbuster movies such as Spider-Man, Star Wars, The Chronicles of Narnia and many more.

Super PI Modded 1.5
In August 1995, the calculation of pi up to 4,294,960,000 decimal digits was succeeded by using a supercomputer at the University of Tokyo. The program was written by D.Takahashi in collaboration with Dr. Y.Kanada at the computer center. This record should be the current world record. (Details are shown in the windows help.) This record-breaking program was ported to personal computer environment such as Windows NT and Windows 95. In order to calculate 33.55 million digits, it takes within 3 days with a Pentium 90 MHz, 40 MB main memory and 340 MB available storage.

According to the operation’s plan, the first military group is to conduct an air scouting of the territory to map out the detailed layouts of anomalous fields location. Thereafter, making use of the maps, the main military forces are to be dispatched.

Despite thorough preparations, the operation fails. Most of the avant-garde helicopters crash. In order to collect information on reasons behind the operation failure, Ukraine’s Security Service send their agent into the Zone center.
From now on everything depends on the player.

Tech ARP x264 HD 3.15
Simply put, it is a reproducible measure of fast your machine can encode a short HD-quality video clip into a high quality x264 video file. It’s nice because everyone running it will use the same video clip and software. The video encoder (x264.exe) reports a fairly accurate internal benchmark (in frames per second) for each pass of the video encode and it also uses multi-core processors very efficiently. All these factors make this an ideal benchmark to compare different processors and systems to each other.

HD Tune
HD Tune is a hard disk utility with many functions. It can be used to measure the drive’s performance, scan for errors, check the health status (S.M.A.R.T.), securely erase all data and much more.

We were not surprised that we were not able to get as high as an overclock as we did on the 890FXA. The 890FXA was designed with the overclockers in mind, the 870A was designed with budget in mind. with some tweaking we feel that 4GHz is possible with this board. We came you a little short of this goal using the 1.5v boundary and upping the CPU frequency.

The Gigabyte 870A-UD3 comes equipped with SuperSpeed USB 3.0 and the newer SATA 6GB/s which both are the latest in data transfers. Compared to the slower USB 2.0 and SATA 3GB/s, the 870A-UD3 is light speeds ahead of any of the older AMD 770 chipset motherboards. This is just one reason to upgrade from an older chipset to another.

Another reason to upgrade to a motherboard like the 870A-UD3 is for the advantage of unlocking the extra cores of the AMD Athlon and Phenom X2/X3 processors. If your current board isn’t capable of this and if you are lucky to have one of these processor, you can this as another upgrade without having to buy a new CPU. Just the cost of the motherboard.

And speeding of cost the 870A-UD3 is moderately priced at $100 from etailers like the Egg. Not too bad with all the latest features and options. Gigabyte is targeting demanding consumers who want great performance at a decent price.

For those that want to overclock, Gigabyte gives you the tools needed to do just that. For the beginner to the expert overclocker there is the EasyTune software that allows you to overclock your CPU without having to enter the BIOS. The app gives you a high percentage of the BIOS options within Windows. But if you want to take it to the next level like a pro, the BIOS is decent by offering the main point to overclock to a decent level. We were able to get 3.9GHz through the BIOS in our testing.

AMD 870A chipset does not offer the Crossfire feature which is a favorite of most. But if you have the need for speed AMD does offer some pretty fast cards for decent prices. But there is nothing like having dual graphic cards in your rig. This chipset is not aimed at the extreme gamer but the moderate gamer. Chances are a moderate gamer may not need the advantages of having dual GPUs in a rig.