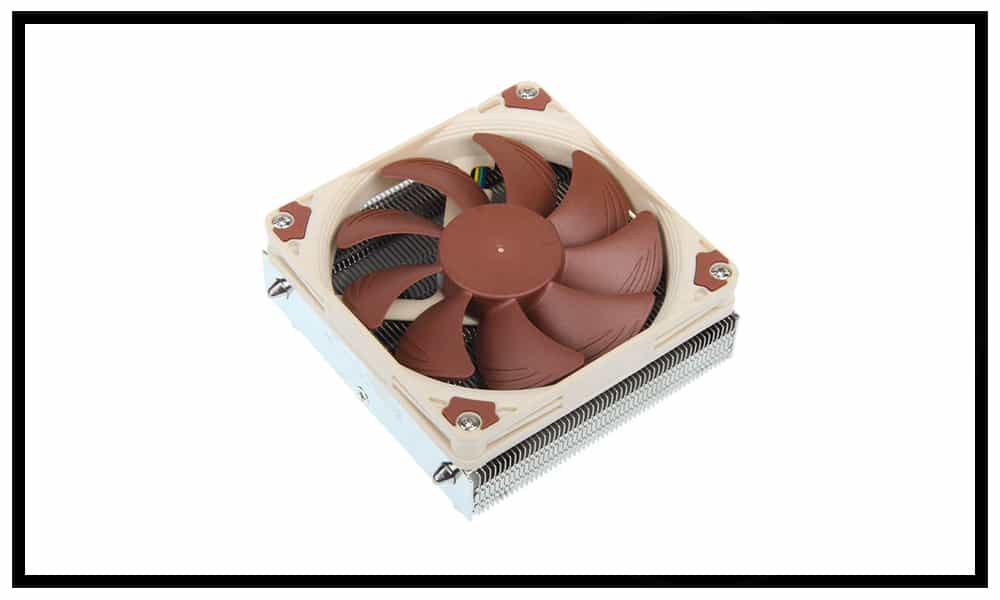 Our latest sample from them has a particular destination as well. It is heading straight towards those with very little spacing inside their towers. Those using some of the very small chassis from Lian Li and Silverstone may be in the market for a cooler like the one we are about to review. The NH-L9i is designed to cool the lower wattage processors that we are seeing pop up all over Intel’s roadmap.

The cooler is very and I mean very low-profile, just 37mm with fan. It is designed to tame the little heat that Intel’s 77 watt TDP processors produce. Coupled with a NF-A9x14 cooling fan, the two can fit into the narrowest of spaces.

Noctua is one of those companies that take the consumer’s needs very seriously. They are not ones to just release products just for sakes of having large portfolio. Each of Noctua’s products is aimed at a particular individual (yes, the same item can be used by various others). Take the D14 for instance. A super cooler aimed at those that overclock and want the best in air cooling. Then there is the C14 that cools very well but not only the CPU but components surrounding the CPU socket. And the list goes on and on.

Our latest sample from them has a particular destination as well. It is heading straight towards those with very little spacing inside their towers. Those using some of the very small chassis from Lian Li and Silverstone may be in the market for a cooler like the one we are about to review. The NH-L9i is designed to cool the lower wattage processors that we are seeing pop up all over Intel’s roadmap.

The cooler is very and I mean very low-profile, just 37mm with fan. It is designed to tame the little heat that Intel’s 77 watt TDP processors produce. Coupled with a NF-A9x14 cooling fan, the two can fit into the narrowest of spaces.

Noctua’s take on the NH-L9i

The NH-L9i is a premium quality quiet CPU cooler for Intel LGA115x based HTPCs and Small Form Factor systems. At a super-low profile of only 37mm, the NH-L9i is ideal for extremely slim cases and due to its 95x95mm footprint, it provides full compatibility with tall RAM modules and VGA cards on mini-ITX mainboards. The custom designed SecuFirm2™ mounting system for LGA115x makes installation a child’s play and thanks to the highly optimised NF-A9x14 premium fan that supports fully automatic speed control via PWM, the NH-L9i runs remarkably quiet. Topped off with Noctua’s renowned NT-H1 thermal compound, the NH-L9i fuses everything users have come to expect from Noctua’s larger coolers into a super-compact package for slim HTPC systems.

Due to the slim 23mm heatsink and the NF-A9x14 low profile fan that measures only 14mm in thickness, the NH-L9 stands a mere 37mm tall, which makes it ideal for use in compact HTPCs or Small Form Factor cases that offer minimum clearance for CPU coolers.

100% compatibility with PCIe cards on mini-ITX

Most Intel LGA115x based mini-ITX mainboards have the PCIe slot sitting right next to the 95x95mm socket zone. While larger coolers that exceed this zone are likely to block the PCIe slot, the 95x95xmm sized NH-L9i provides full compatibility with PCIe cards.

Allowing to reduce the maximum speed of the NF-A9x14 fan from 2500 to 1800rpm, the included Low-Noise Adaptor (L.N.A.) makes it possible to achieve near-silent setups using CPUs with less than 65W TDP.

The NH-L9i bundles a custom-designed, backplate-less SecuFirm2™ mounting system for LGA115x that offers extended compatibility with mini-ITX boards and makes installation easier than ever, all while maintaining the trusted SecuFirm2™ quality.

The Noctua NH-L9i is modest little cooler that is designed to take the worries of having to combat the heat (lack of anyways) made by the lower TDP processors. Chances of you using these low power processors are not overclocking but probably using them in a home theater setup of some other less demanding purposes. 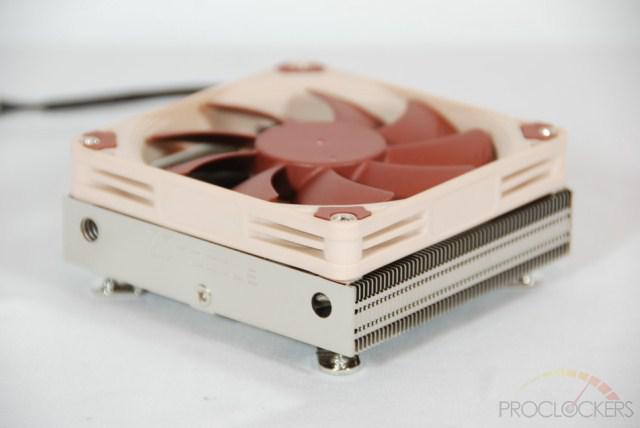 The cooler was designed to be used with Intel socket 115x platforms utilizing a CPU that is not requiring over 77w of thermal design power. This would include a long list of processors within the Sandy and Ivy Bridge sector. But of the two platforms stated only the SB contains processors over 77 TDP by default. List below:

The cooler is very low-profile measuring just 37mm tall or 1.45 inches for us Americans. We are talking about a cooler that will fit the need of many ITX builders as well as those building 1U rack systems as well. 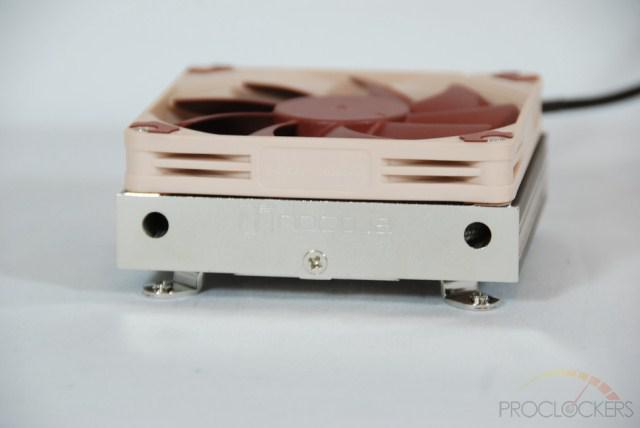 As you can tell the L9i is a flat-top style cooler where the fan is mounted on top of the heat sink and blows down or upwards depending on the user’s preference. Many would elect to point the air down as it would have two benefits: cooling the processor as well as other components serving the CPU socket. 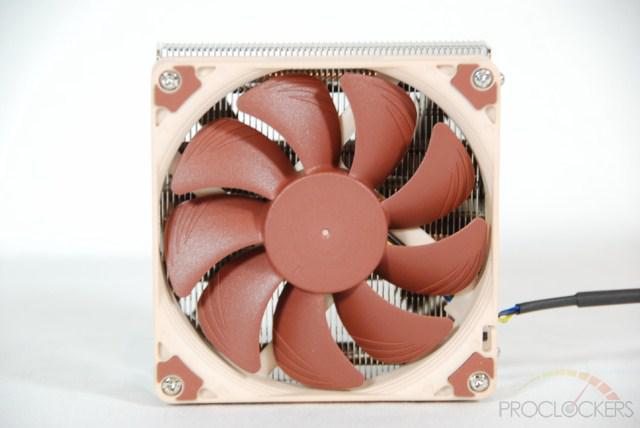 The L9i uses two 6mm heat pipes to help the array of aluminum fins to tackle the heat made by the processor. 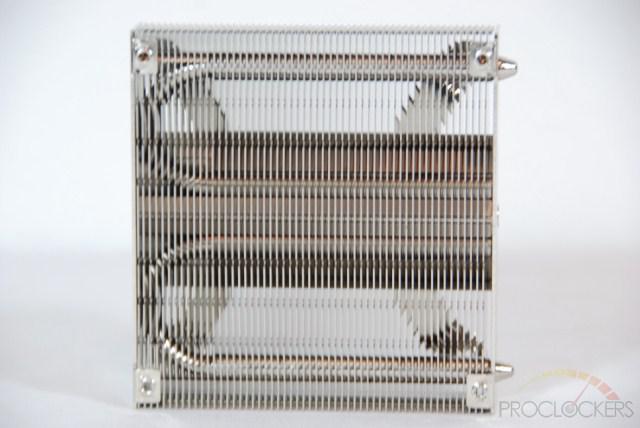 One of the not listed features that I like best is the cooler comes pre-assembled. No need to worry about fitting the fan to the cooler nor do have to worry about mating the SecuFirm2 mounting hardware to the base. 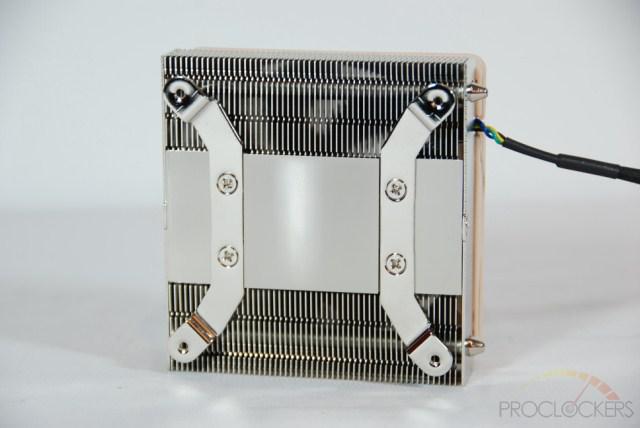 Speaking of bases the one present on the L9i is extremely shiny and flat. But we all know that shine doesn’t necessarily lead to performance. 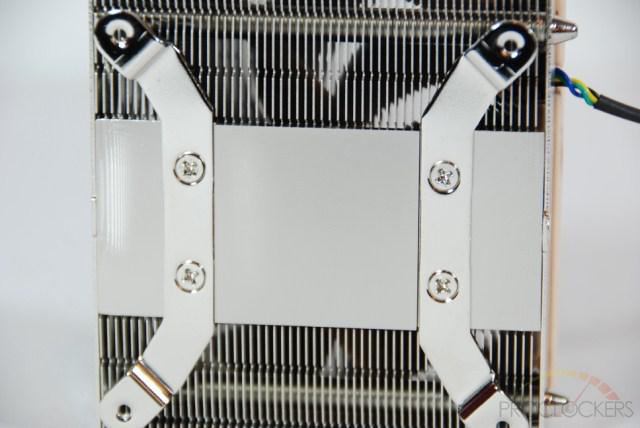 The fan used on the cooler is of a 92mm variation. The specifications are really quiet-friendly.in PWM-mode the numbers are as follows: 300 to 2500 RPM with a maximum dBA of 23.6. When using the MNA adapter the numbers drop to 1800 RPM and 14.8 dBA. 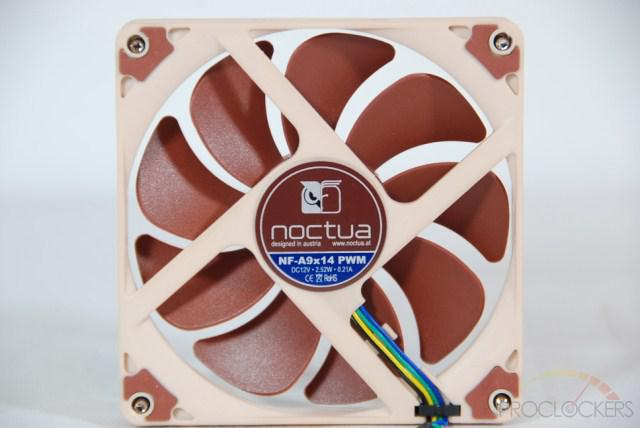 There aren’t many pieces when it comes to the accessories that travel with the cooler. There are four extra screws if you decide to use a thicker fan, security screws to complete the SecuFirm2 hardware, NT-H1 thermal compound. 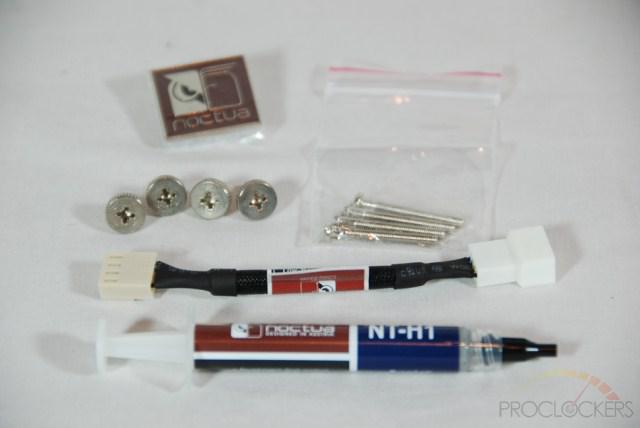 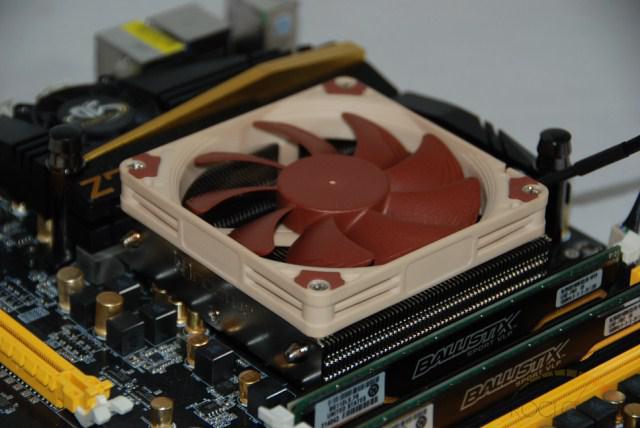 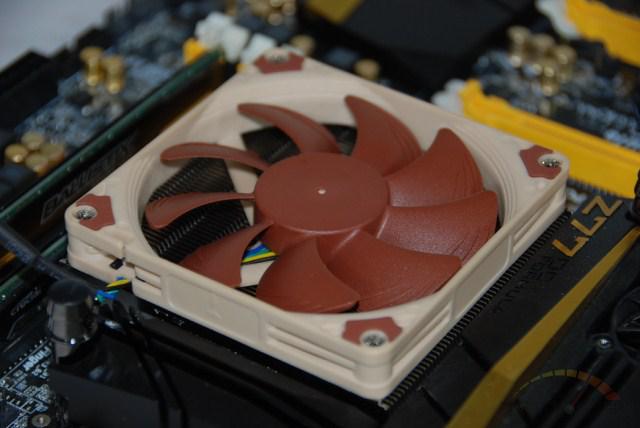 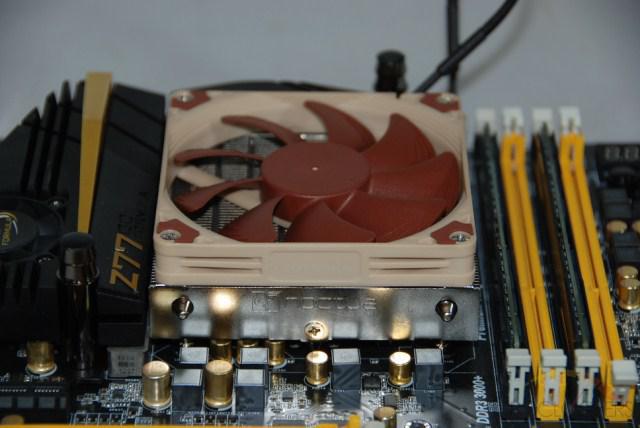 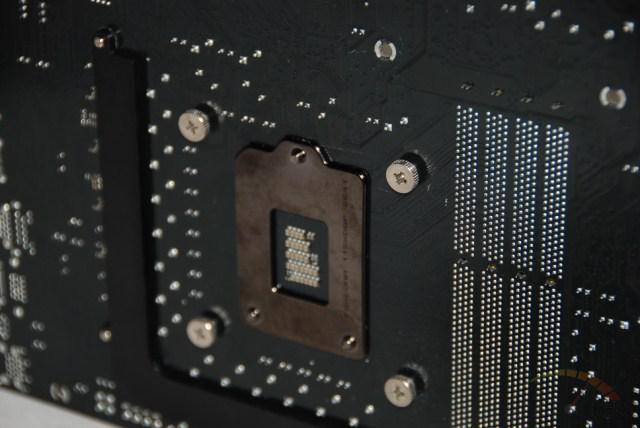 For our testing we will be using the following procedures and parameters to acquire the necessary data:

I was totally impressed by the short in structure Noctua NH-L9i cooler. The cooler performed way better than the stock and allowed us to maintain our taller than normal memory modules. Granted chances are if you are deciding to use a cooler like this you are probably using it in a system where you don’t need high performance memory but it is nice to know you have the option. And using a 37mm tall cooler gives us that option. And if you are using an ITX motherboard, you have to give this cooler a look. It does not block the lone PCIe slot that the has.

Not only was the performance worth talking about so is the installation. With the cooler coming already with the fan attached and most of the SecuFirm2 equipment contacted all we had to do was apply some thermal compound to the CPU, aligned the contact holes and secure. One most also remember that the L9i is only designed for the socket 115x motherboards and no others. This is because this is the current range of Intel’s lower TDP processors. If you are working with an AMD processor you will have to look at the NH-L9a cooler also from Noctua. So, a review is coming up for that as well.

Even with the representation that Noctua has for producing quiet fans, we had our doubts on a 92mm blow. But the doubts were quickly erased. When using the PWM function we did not hear a thing from the fan from the fan. Only when we forced it to run at maximum rotation did the noise come about. It was easily audible for not overwhelming.

We find the L9i pricing just under $50. Not a cheap price for the performance (remember it is small) but nice for all the other conveniences it offers.