The budget-friendly Galaxy A series targets buyers from various markets, most of the phone models coming at different prices, with some differences in terms of performance or features.

We will compare in our review the Galaxy A10 and Galaxy A20 and see what each smartphone offers, and what are their similarities and differences. By the end of this review, you will see which Galaxy smartphone is a better purchase.

Let us check the Galaxy A20 and the Galaxy A10 below in our in-depth review that focuses on four main categories: body, platform & memory, cameras, and some extra (but essential) features.

Both Galaxy A20 and Galaxy A10 are affordable smartphones, featuring nearly the same specs, with very slight differences. Are these differences worth the extra cash required to buy the more expensive Galaxy A20? 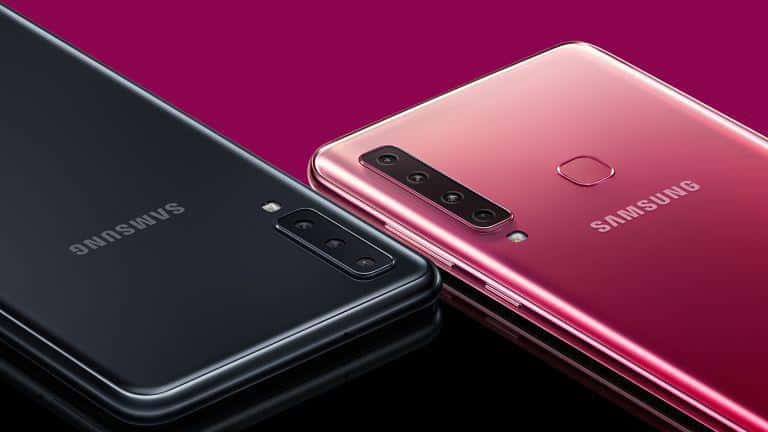 Samsung Galaxy A10 vs Galaxy A20 Technical Specifications

We have underlined all the differences between the two smartphones for a clear view of each specification.

Although both Galaxy A20 and Galaxy A10 have a cheaper build, you will never think they are not as fancy as the pricier smartphones on the market. The u-shaped notch and those slim bezels make both devices look much better than other phones in this price range.

Looking at the design of the Galaxy A20 and the Galaxy A10, you will see that the two smartphones are nearly the same size. The Galaxy A20 is a tiny bit larger, and has thinner bezels, but the difference is so small it does not even count.

Turning the phones on their back, you will see a much bigger difference in terms of design. That is because the Galaxy A20 has a rear fingerprint scanner and a camera module with two lens, whereas the A10 has only one rear camera and no fingerprint scanner.

Going back to look at the screen, we see that the water drop display is a similarity, but the screen panels are different. The A20 is an upgrade when it comes to deeper blacks and a better contrast since it comes with an AMOLED screen. Meanwhile, the A10 is more on the cheaper side, featuring an LCD screen of nearly the same resolution.

As for the build of the two smartphones, they are both made of polycarbonate plastic and have a similar weight. The plastic body is clearly what separates the two devices from fancier and more expensive smartphones. Unfortunately, the plastic body is also what makes both the Galaxy A20 and the Galaxy A10 gather more fingerprints and be less durable against scratches.

Verdict: The Galaxy A20 is a clear winner in this category since it has a better display and a much bigger screen-to-body ratio.

It is clear that without a Snapdragon processor, neither the Galaxy A10 nor the Galaxy A20 shine when it comes to running games at high settings and stable FPS. Nonetheless, we carried on and tried to squeeze the best of the two budget smartphones.

They both run Android 9 with the One UI overlay from Samsung.

The Galaxy A10 could run games, but the 2GB of RAM is not powerful enough to keep up with the requirements of many games. This means you will see a bit too many stutters for your liking. As long as you do not play games that require fast reactions, the A10 is okay.

Meanwhile, the Galaxy A20 fares much better in games thanks to a bump in RAM. For instance, at maximum details, Asphalt 9 reaches 25 FPS, which is reasonable enough for a smartphone in its price range. Still, the Galaxy A20 is not the best option for those willing to play games on their phones, so should better think of a more powerful upgrade in terms of chipset and RAM.

Verdict: The Galaxy A20 is again a winner in this category since it comes with those 3 GB of RAM, compared with the 2 GB of RAM the Galaxy A10 offers.

As you can see in the spec sheet above, the difference between the Galaxy A20 and the Galaxy A10 is the extra 5MP ultra-wide angle lens and a boost in the selfie camera department for the Galaxy A20.

The photos you take with the Galaxy A10 are decent but not as good as its slightly more expensive sibling. With a Galaxy A10, you could take good photos in bright and neutral lightning.

The Galaxy A20 excels in taking outdoor photos and if you like portrait mode, its dual cameras do a great job of focusing the subject in the photos due to its Live Focus option.

The front-facing camera on the Galaxy A10 is again underwhelming, underexposing scenes, and taking photos with a lot of image noise. Meanwhile, the Galaxy A20 is clearly winning with its better 8 MP lens which is able to take realistic photos without oversaturating colors and also allowing you to blur the background.

Both cameras on the Galaxy A10 and the Galaxy A20 can shoot videos in up to 1080p at 30 FPS, but don’t expect too much. They’re pretty good for occasional short videos and are great at adjusting exposure levels when the lighting conditions change.

Verdict: With better cameras on the Samsung Galaxy A20, it is again clear that it takes better photos in various light conditions compared to the A10. The Galaxy A20 is again taking the lead.

What makes the A10 again lose points at this category? It has a smaller battery and no fingerprint scanner.

Meanwhile, we see a bigger battery on the Galaxy A20 and a rear-mounted fingerprint scanner, which are definitely a plus. Add the fast charging option to the Galaxy A20 (supports 15-watt charging), and you will be able to charge this smartphone in less than two hours. In just half an hour, it was able to reach up to 30% power.

Verdict: The Galaxy A20 is again in the lead, and now it is clear who the winner is.

The only category in which the Galaxy A10 would possibly win is the one that looks at the price. With lower specs and the lack of a few notable features, the Galaxy A10 is definitely the winner in terms of its price tag.

If you are on a strict budget, then the Galaxy A10 is a good purchase. However, if you can spend an extra $30, we recommend choosing the Galaxy A20.

When it comes to picking the best budget-friendly smartphone from Samsung, you will have to choose a Galaxy A series device. Depending on how much money you are willing to spend on a new smartphone, you will realize which is the best choice that fits your needs.

Of course, for an extra $30, we would always go for the Galaxy A20 since it is much better in terms of smoothness when running more demanding tasks (like games), it takes much better photographs, charges faster and last longer thanks to its larger battery. What also made the Galaxy A20 a winner in our comparison review was its much better display compared to the one you would get with the Galaxy A10.

Samsung Galaxy A20 is a clear winner and should be a great purchase for those looking to find a device that offers smooth performance at an affordable price tag.