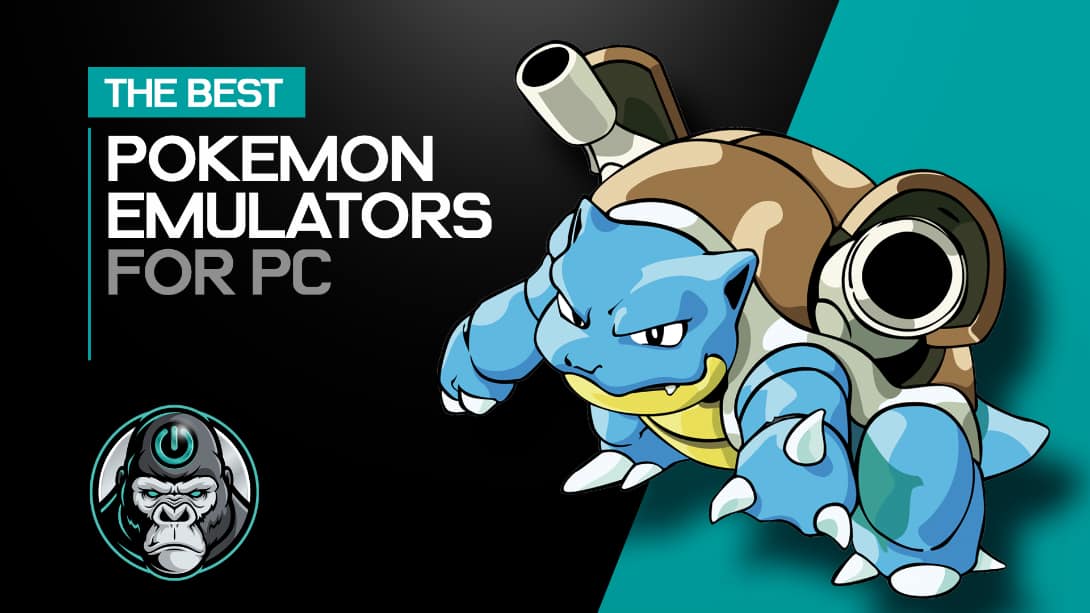 What are the best Pokémon emulators for PC?

Pokémon is one of the most popular and well-known game franchises in the world, and it has no shortage of fans, both new and old.

However, most Pokémon games have been developed for and released exclusively on Nintendo consoles, limiting them from being played by those who don’t own the specific consoles.

If you find yourself wanting to replay your favorite Pokémon games, you’re not alone, and the best Pokémon emulators for PC can help you jump back into these fantastic games.

The Best Pokémon Emulators for PC

While there is no shortage of Pokémon emulators, not all can count themselves among the best. Fortunately, we’ve rounded up the top emulators for PCs so you can easily find the best one for you.

Here’s our list of the 10 best Pokémon emulators for PC: 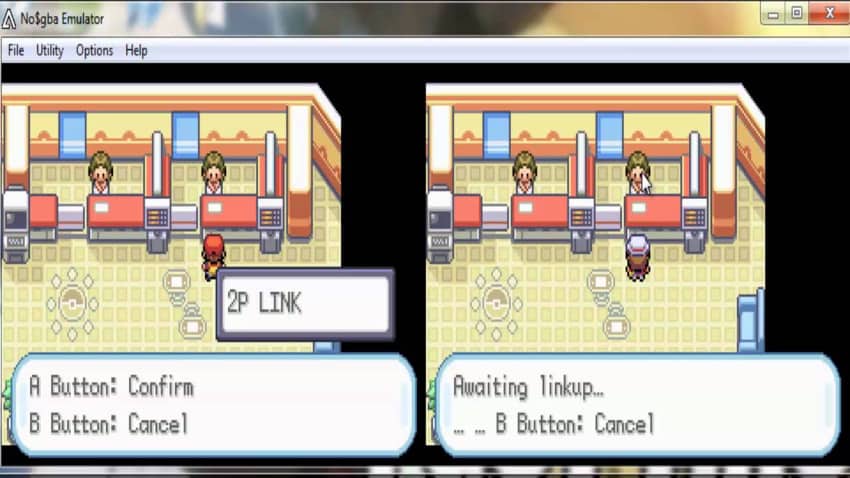 NO$GBA is one of the most lightweight Nintendo DS emulators for PC to play Pokémon games.

While it isn’t sleek or fancy, it runs effortlessly even on low-end computers and won’t put you at risk of overloading your system.

Although it started with an emphasis on Gameboy Advance games, it is now largely regarded as one of the best for DS games, and it comes with a lot of handy features.

Along with being one of the fastest emulators on the PC, you can also tweak graphics settings and load ROM and BIOS files easily.

There is also a chance that wifi multiplayer support may be coming in the future, but nothing concrete has been set yet.

The official website also has a full FAQ section if you need any help getting this emulator set up or learning more about how to use its features.

Regardless, if you’re using an older computer and want to play your favorite Pokémon DS games, this is one of the best Pokémon emulators you can find. 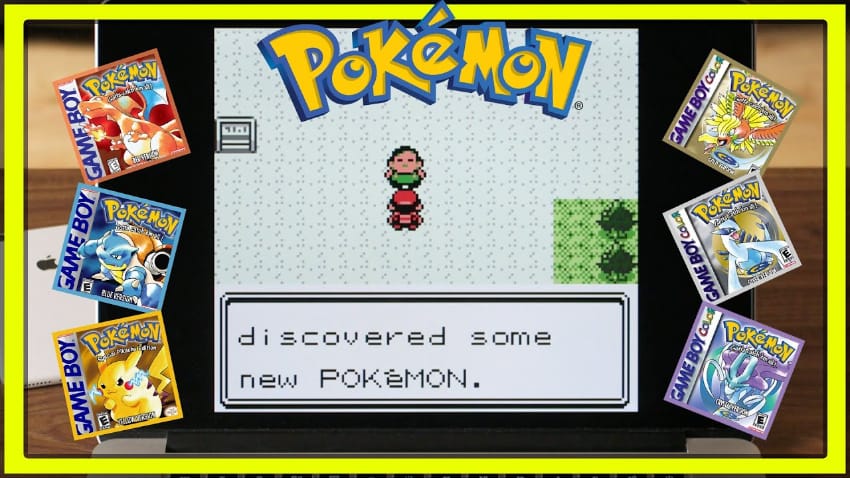 The user interface is incredibly intuitive and easy to navigate. When you import games, this emulator automatically adds the original box art and sorts it into the appropriate console category.

Because of these features, you can import all of the most popular Nintendo games and not have to worry about losing them in a mismatched, disjointed list.

While it does lack some graphics and emulation settings that make other emulators more popular, OpenEmu is still one of the best Pokémon emulators for PC, especially if you are a beginner. 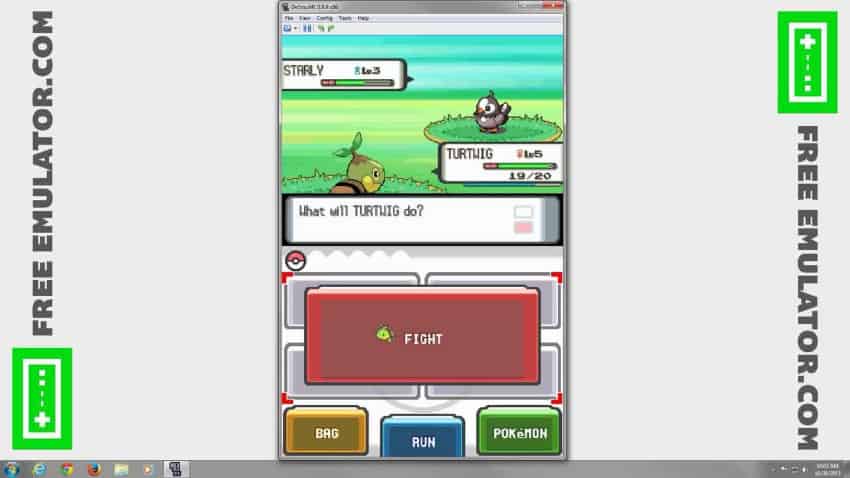 Despite being one of the best Pokémon emulators for PC and Mac, this emulator is one that hasn’t been updated since 2015.

However, that doesn’t mean that it can’t get the job done, and it runs surprisingly well with a good number of features.

This is one of the top Pokémon emulators if you want customization options and it gives users a lot of ways to customize the graphics of their games.

It also comes with a cheat code manager and USB controller support, as well as a save game feature so you can pick up right where you left off.

While you can play some of the best Pokémon games on this emulator, it does lack wifi emulation and not all games are available. Still, if you’re looking for quality customization, this is a good emulator to try out. 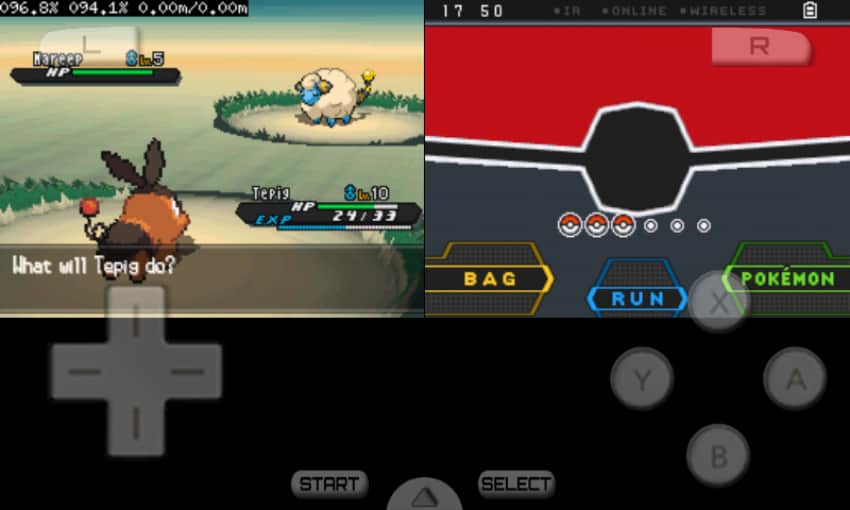 Drastic DS is a solid Nintendo DS emulator, and it comes with a lot of great features, including save states, controller support, button mapping, and more.

This emulator also offers users six different layout options so that you can choose how to emulate the dual screens of the original console.

The official Drastic DS Emulator website also has a lot of advice to help you get this emulator up and running easily, which can be a great resource if you’re new to emulation software.

If you want to be able to play Nintendo DS games both on your PC and on your phone, this is one emulator that is worth considering, especially since the Drastic DS emulator is known to be able to play some of the most popular Pokémon games almost flawlessly. 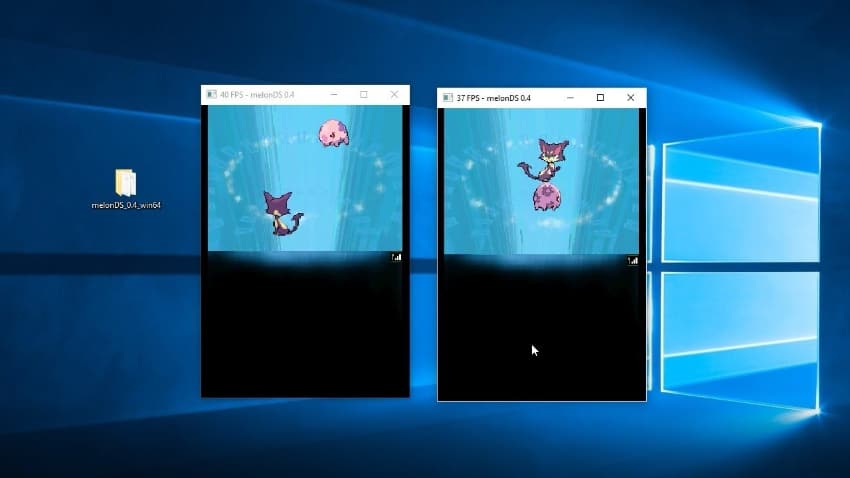 The Melon DS emulator aims to provide users with a fast and accurate emulation experience, and it doesn’t disappoint.

While it doesn’t have the emulation and graphics settings that DesMuMe features, it does offer OpenGL render, which allows you to choose high resolutions.

It also comes with local wifi and cheat code support so that you can play with your friends or take advantage of the best Pokémon Emerald cheats.

Along with this, it also has save slot options, different screen layout options, and joystick support.

Overall, it may not be the most fleshed-out emulator, but it does offer a lot of tangible benefits, and it is capable of playing a lot of your favorite games without lagging or crashing.

Melon DS is also very popular due to its wifi and local multiplayer features, enabling you to play Pokémon with your friends who use the same emulator.

While development on this emulator was put on hold in 2018, it is still open-source and available for anyone to build upon.

However, even though it isn’t being officially updated anymore, there aren’t a lot of tweaks that are needed since the performance is already superb.

Overall, if your looking for one of the best DS emulators to play Pokémon games on, you’ll be hard-pressed to find a better option than Melon DS. 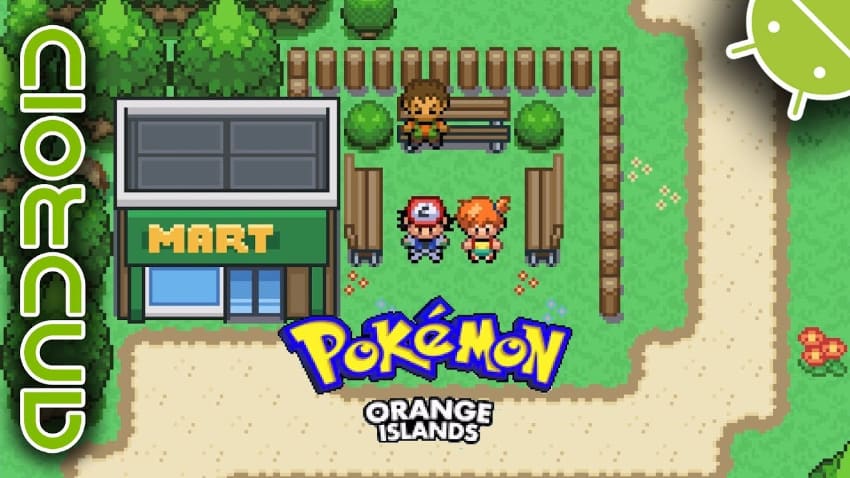 If you’ve ever looked into downloading an emulator before, chances are you have heard about RetroArch. This is one of the best Pokémon emulators for PC, Mac, Linux, Android, and iOS.

If you’re looking for an emulator that will allow you to play through the complete Pokémon games list, then RetroArch is the emulator for you.

Instead of specializing as a Gameboy Advance or Nintendo DS emulator, RetroArch uses separate cores to emulate a large number of different consoles.

This makes it a fantastic asset for the retro gaming community, especially those who want to play all of the best Pokémon games.

Along with being one of the best Pokémon emulators for PC, it comes with a number of great features, such as integrated downloads, game thumbnails, a cheat code manager, automatic controller configuration, and customizable shaders.

RetroArch also has an extremely detailed website where you can stay up-to-date with all the latest updates, learn more about this emulator’s features, and get help with any problems you may have.

This is by far one of the best Pokémon emulators for PC and other devices that you can ever download, and it acts as a one-stop shop for numerous consoles. 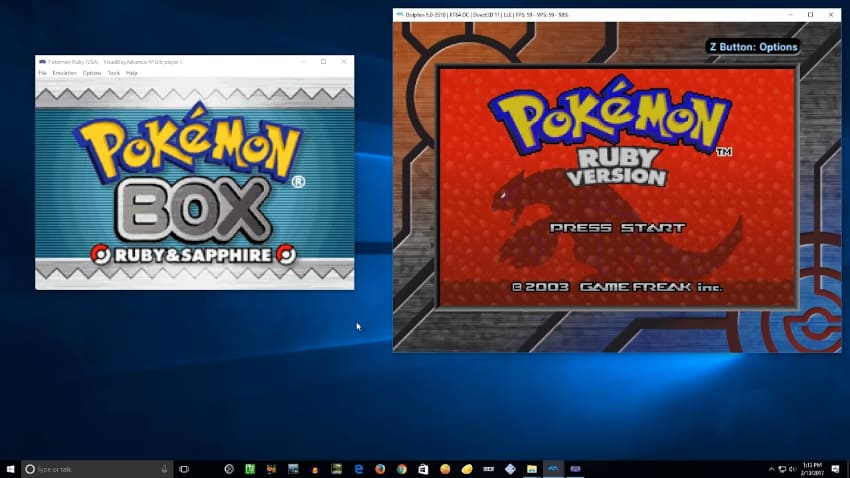 Dolphin is another extremely popular emulator available for the PC, Mac, and Android.

This emulator is incredibly easy to use, making it one of the best choices for those unfamiliar with installing and using emulators.

It can also emulate numerous consoles, meaning that if you get tired of playing Pokémon games, you can always switch on some of the best Gamecube games of all time instead.

Along with its ease of use and vast emulation abilities, Dolphin is also an emulator that you can take on the go if you have an Android device, which can be a great way to kill time when your boss isn’t looking.

But what truly makes Dolphin such a great platform for playing Pokémon games is that it runs incredibly smoothly and it isn’t lacking in customization options.

With this emulator, you can set your desired resolution, customize your mapped keys, enter cheats, and view all of your saved states easily.

Basically, if you can name it, Dolphin can more than likely provide it, which makes it, by far, one of the best emulators to play Pokémon games on.

While Dolphin is a great emulator that covers a lot of different consoles, Citra specializes in playing Nintendo DS games.

Citra is an incredibly well-designed emulator and it runs smoothly on almost all operating systems, including Linux and Android.

This emulator boasts the ability to play games in an astonishing 4k, and it also comes with multiplayer support so that you can enjoy your favorite Pokémon games with friends.

Speaking of Pokémon games, you can even see all of the compatible games on Citra’s website and search for the ones you want to play to see how well they currently run.

Keep in mind that even if a game isn’t running perfectly yet, this emulator is constantly being improved and updated, so you should definitely stay tuned because this emulator is only going to keep getting better. 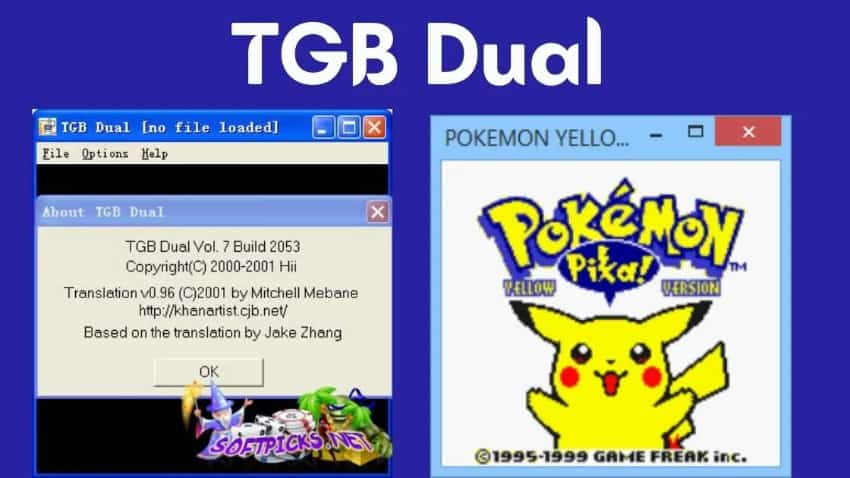 If Nintendo DS games aren’t your target and you have a preference for Gameboy Color games, then this is the emulator for you.

TGB is the most reliable and stable Gameboy emulator for PC, and it runs impressively fast. You can even play two games at once without losing performance!

This dual-playing feature is great for those who want to play Pokémon Red and Blue simultaneously to trade Pokémon between the games.

Alternatively, two people can play different Gameboy Color games on the same PC at the same time, which can be a great way to play with your friends.

This mod also comes with solid cheat code support, meaning you can still make use of the best Pokémon Blue cheats if you just want to have fun and give yourself unlimited Master Balls.

If that wasn’t cool enough, it is also possible to link TGB Dual to two different PCs on the same network or via the internet by using a VPN. With this feature, you can literally relive the days of wireless Gameboy battles on your PC.

TGB is, without a doubt, one of the best emulators for PC that you can download today if you want to play some of the best Gameboy Pokémon games with the same level of playability as the original console. 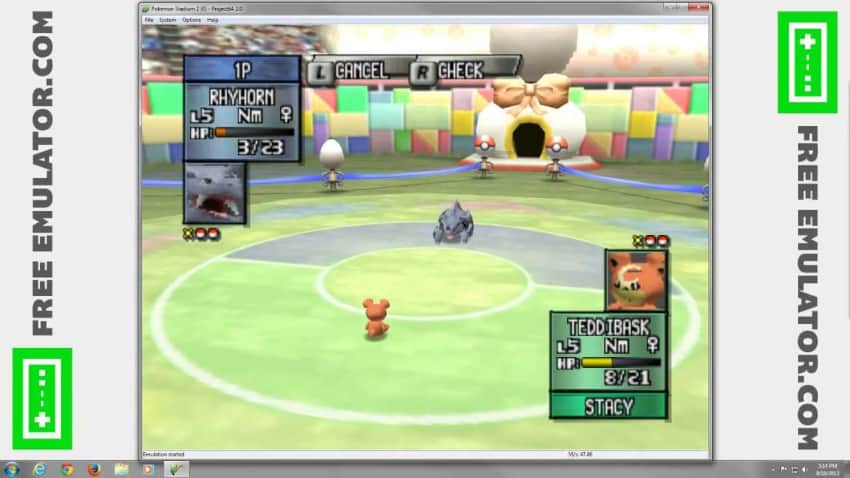 Taking the number one spot on our list is Project 64. This emulator is one of the most versatile on our list, and it is used as the core for many other emulators, such as RetroArch.

As an open-source program, it is continuously being updated by the community, and it allows users to play Pokémon games with a fantastic level of stability.

Pokémon Snap and Pokémon Stadium play especially well on this emulator, if not better than on the original console.

This emulator is also available to download for Android devices, which gives you a good way to play Pokémon games anywhere at any time with very few bugs to get in the way.

If you’re looking for the best Pokémon emulator that is also capable of playing some of your other favorite N64 games, Project 64 isn’t something that you’ll want to pass up.

Pokémon is one of the most successful franchises in the world and, to date, there are 122 known Pokémon games spanning eight generations of consoles.

If you want to play Pokémon games on your computer and relive some of your favorites, these ten emulators are the best to help you do it.

While each of these emulators have their own strengths, all of them can run some of the most popular Pokémon games with an incredible level of quality that can rival even the original consoles.

Here’s a quick recap of the 10 best Pokémon emulators for PC:

What’s the best Pokémon emulator for PC, in your opinion? Leave a comment below.

The 10 Rarest Shinies In Pokémon GO