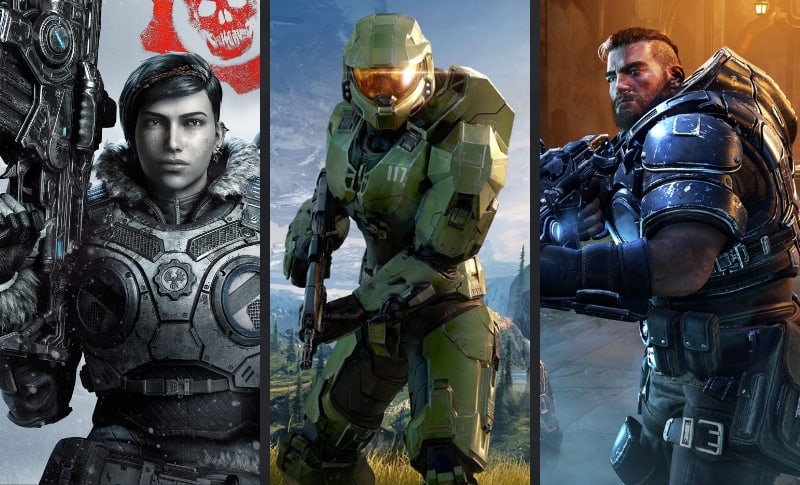 What are the best Xbox Series X exclusive games?

Like PlayStation, Xbox has many console exclusives you can’t play anywhere else, and some of them are definitely worth investing in an Xbox Series X for.

However, because many Xbox exclusives are available right now, it can be hard to know which ones will provide you with the best gameplay experience.

Fortunately, we’ve narrowed down the ones that will give you the most bang for your buck, so all you have to do is start playing!

Our ranked lists are created by researching and rounding up information from the most reputable web sources, so you can find the best games to play right now. 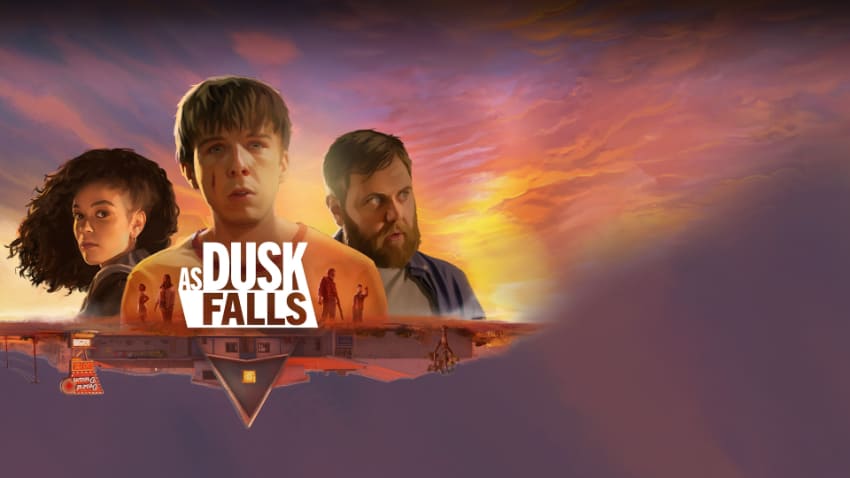 If you’re a fan of games like Life is Strange, you’ll love this interactive story adventure game from Interior Night and Xbox Game Studios.

The story revolves around two families whose paths cross in the Arizona desert, with numerous player decisions impacting how everything plays out.

What makes this game stand out is its impeccable writing that touches on many deep topics, such as trauma and family, that are often under-explored in traditional video games.

There are also many accessibility settings to choose from and a companion app that you can use to play with friends so that you can have a say in the game’s big decisions.

Upon release, As Dusk Falls was praised for its emotional narrative choices, voice work, art style, and co-op mode, all things that have helped make it a must-play for Xbox users.

Even if you’re not usually a fan of narrative-driven games, you may want to check this game out because it is surprising how invested you become in it in just a short period of time. 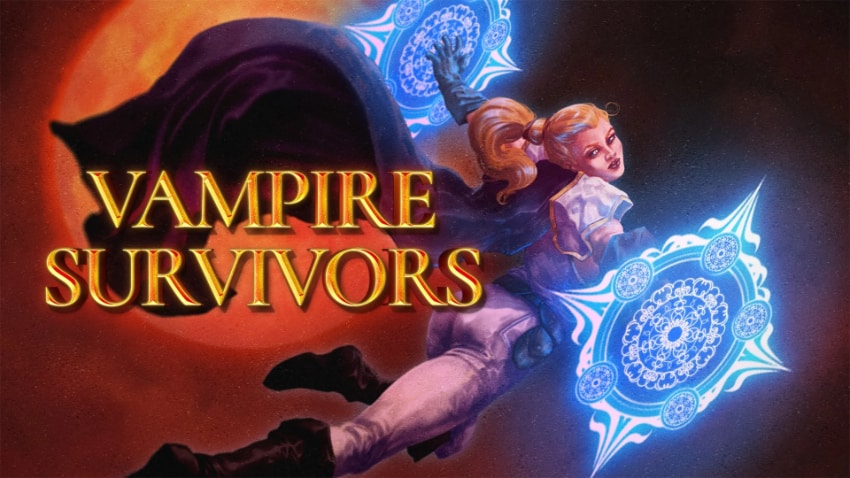 Vampire Survivors is a quirky shoot ’em-up game that originally debuted on PC but has since been ported to the Xbox Series X and S.

In this game, players control a character that attacks automatically, and the goal is to hold out for as long as possible against a seemingly endless wave of monsters.

Each level has a time limit of between 15 and 20 minutes, after which a final boss named Death will appear, with a duplicate spawning after every minute until the player ultimately dies.

While it is a remarkably simple premise, Vampire Survivors won the Golden Joystick Breakthrough Award and has received universal acclaim for its gameplay.

It is worth giving this game a try, especially if you’re a fan of the best retro games of all time because it definitely has a classic vibe. 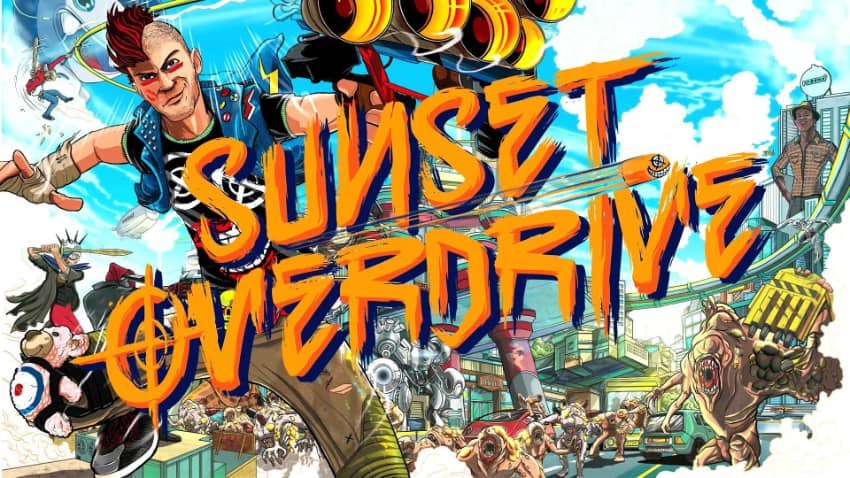 Developed by Insomniac Games, Sunset Overdrive is an action-adventure game that emphasizes speed and momentum over stealth and caution.

Set in Sunset City, players can use numerous weapons as they run, zip-line, and parkour their way through the mutant-invested open-world area.

While it’s set in a post-apocalyptic future, Sunset Overdrive isn’t bleak and depressive but rather bold, loud, and comedic.

Fans of the Borderlands franchise will certainly find a lot to love about this game, and it helps that the world functions as a giant playground for players to explore and blast their way through.

There is even a multiplayer mode that gives seven players the chance to complete a series of missions together, with the ability to bring items back and forth between single and co-op modes.

Currently available on Game Pass, you should definitely check out Sunset Overdrive if you want to play an addictingly fun game that doesn’t take itself too seriously. 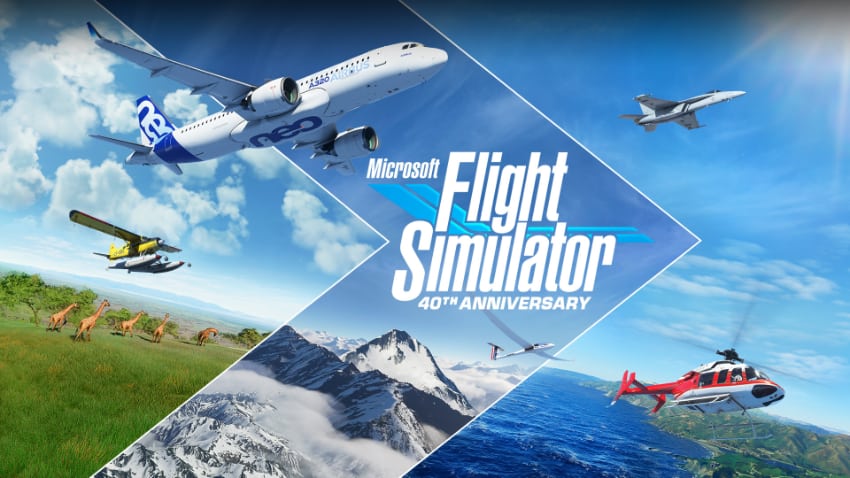 There are the best real life simulation games, and then there’s Microsoft Flight Simulator which gives players the chance to live out their dreams of being a pilot without all the pesky training.

Even if you’re not usually a fan of simulation aspects, this flight simulator is something truly special, as it stimulates the topography of the whole world using data from Bing Maps.

It even uses real-world data to simulate real-time weather and air traffic, so you can truly get an idea of what it is like to fly anywhere in the world at any given time.

In fact, the weather effects are so up-to-date that, in 2020, players were able to observe Hurricane Laura in real time as it developed off the east coast of America.

Along with this, there are also many different game modes, including landing challenges and a safari mode where you have to photograph animals from the air (without crashing).

While it may not be as fast-paced or engaging as some of the other games on our list, we recommend checking this game out for yourself, as it is truly a sight to behold. 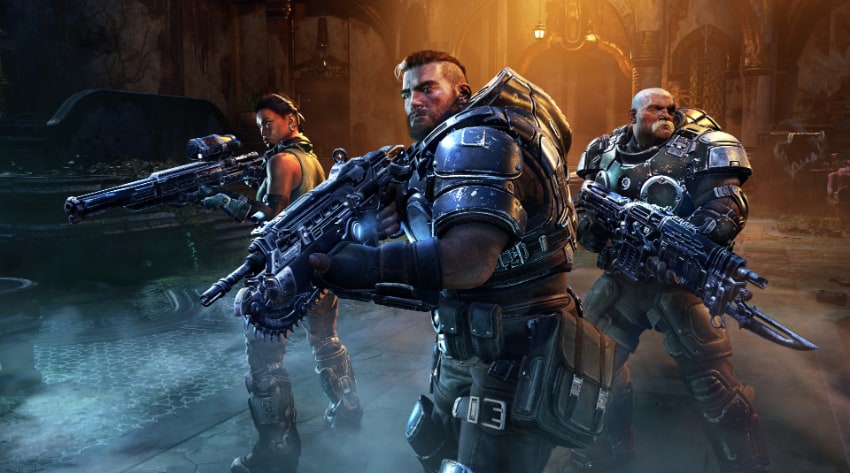 A spin-off of the Gears of War franchise, Gears Tactics is a turn-based tactics game published by Xbox Game Studios in 2020.

Played from a top-down perspective, this game allows players to command a squad of soldiers with the main objective of eliminating all hostiles on the map.

Gears Tactics really stands out because you can freely explore the whole map without being confined to a grid, like in many other turn-based games.

Along with the main campaign, there are also many different side missions and a Veteran Mode, which is unlocked after finishing the story missions for the first time.

While it doesn’t have a multiplayer option, once Veteran mode is available, you can remix campaign missions with a variety of new modifiers to make replaying the game much more interesting and challenging.

If you’ve enjoyed the best post-apocalyptic games of all time and are looking for something different, we definitely recommend giving Gears Tactics a try!

5. Ori and the Will of the Wisps 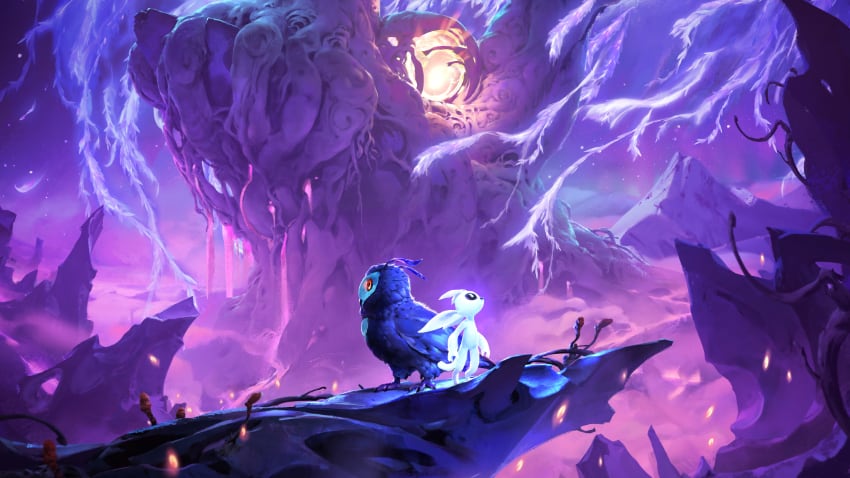 Released in 2020 for the Xbox One and optimized for the Xbox Series X as a launch title, Ori and the Will of the Wisps is a gorgeous platform adventure game.

This game emphasizes exploration and puzzle solving and was largely inspired by the Metroid and Raymen series, making it a must-play for fans of those games.

When it was released, it received universal acclaim for its artistic expression, characters, combat, and story, even winning Xbox Game of the Year at the Golden Joystick Awards in 2020.

Ori and the Will of the Wisps is a sequel to Ori and the Blind Forest, but it features a lot of updates, including NPC side quests, improved combat, and the introduction of autosaving, as opposed to manual save points.

Although there were some fame rate issues and visual bugs when the game was initially released, all of these issues were largely resolved thanks to a day-one patch, and now it runs seamlessly.

While it may not be as well-known as some of the other big names on our list, Will of the Wisps is undoubtedly a beautiful game that is worth playing at least once! 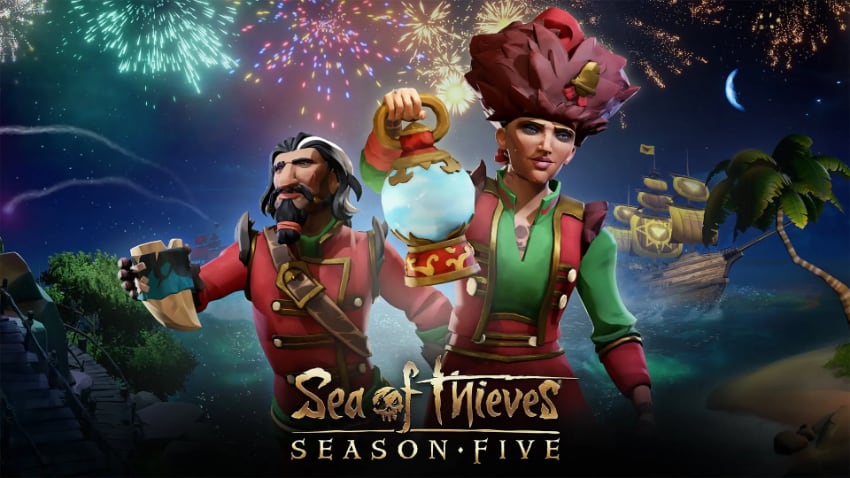 From the maker of some of the best N64 games of all time comes one of the most popular Xbox games in the world, and one that is really hard to put down.

Although Sea of Thieves was criticized for lack of content when it launched, things quickly turned around, and now it is one of Xbox’s biggest exclusives.

This game gives you the ability to play as a pirate taking on voyages for various trading companies in a huge open-world adventure.

Best of all, because it is multiplayer, you can expect to run into other players out on the high seas regularly and either form alliances with them or take them on to try and grab their loot.

As of June 2022, Sea of Thieves has attracted over 30 million players and, the prior year, took home the Best Evolving Game award at the British Academy Game Awards.

If you’re a fan of multiplayer action games and want to immerse yourself in an unpredictable and entertaining high-seas adventure, this is one game you won’t want to pass up. 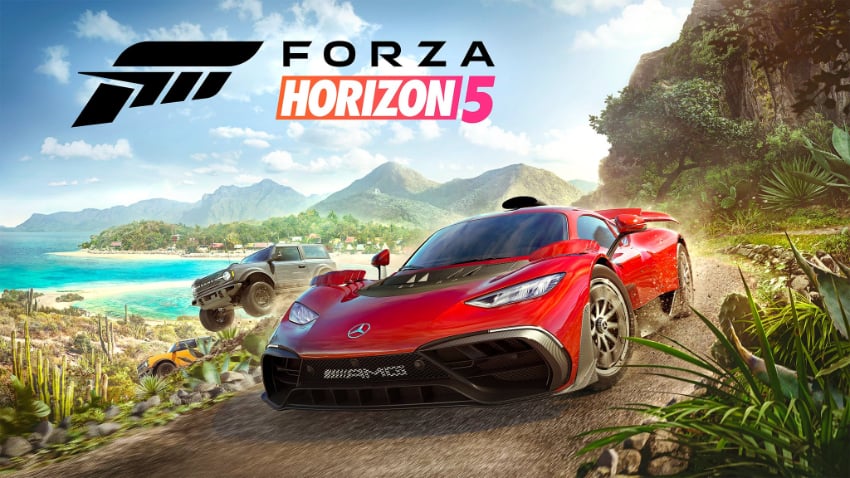 Set in a fictional version of Mexico, Forza Horizon 5 boasts the largest open-world map of any of the Forza Horizon games, and there is no shortage of races and challenges to complete.

There are also numerous ways to customize your cars by swapping engines, drivetrains, and body kits.

You can even download custom tunes made by other players to help give your cars a performance boost if you don’t want to tweak everything yourself!

However, Forza Horizon 5 really shines in terms of map design, and its new local weather system is one of the most impressive in gaming.

Furthermore, there are still expansions being released, so if you start playing now, you can still look forward to even more content in the future! 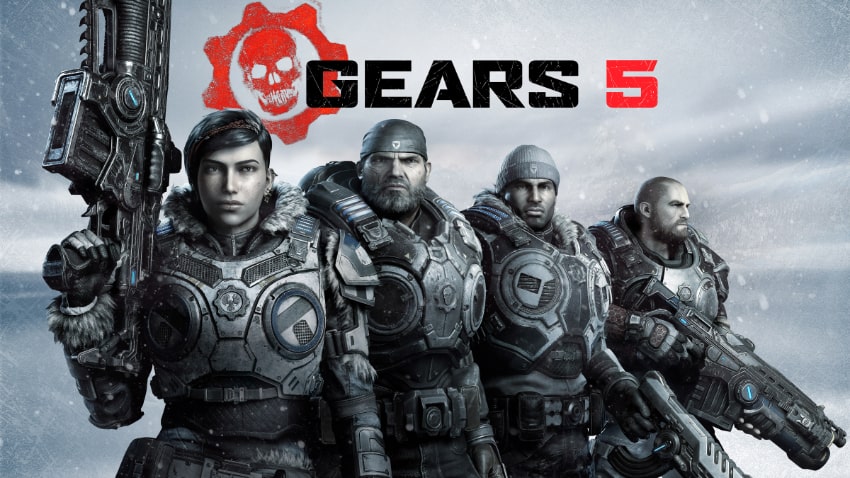 Although it debuted on the Xbox One in 2019, Gears 5 has really come to life thanks to the Xbox Series X’s power.

As opposed to the Xbox One version, Gears 5 benefits from a visual and performance boost on the X, boasting 60fps and 4k resolution.

It also has an impressive multiplayer mode, like Gears of War 4, one of the best split-screen Xbox One games, supporting up to 120 Hz.

This third-person shooter is one of the best on the Xbox Series X, and unlike previous titles in the franchise, it features more time to explore and experience the environment and story.

Set a couple of months after the events of the fourth game, Gears 5 focuses on Kait Diaz and the origins of the Locust Horde that once threatened all human existence.

While it isn’t as fast-paced as its predecessors, Gears 5 still nails all aspects of gameplay, from narrative storytelling to shooting mechanics.

Having been named the Xbox Game of the Year at the 2019 Golden Joystick Awards, it really is something you have to play for yourself to get the full impact of its impressive design. 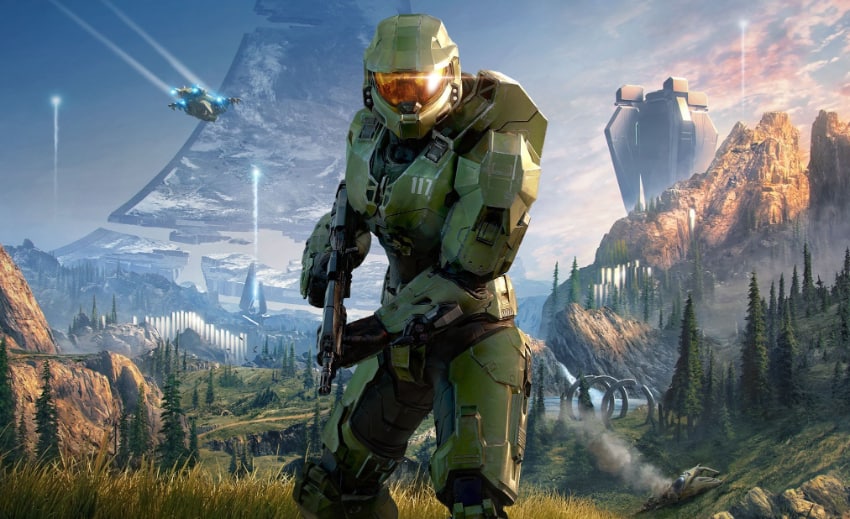 Taking our number one spot is Halo Infinite, the sixth title in one of Microsoft’s biggest franchises and one that almost everyone knows.

Released in 2021, Halo Infinite follows the Master Chief as he battles against the Banished on the ringworld Zeta Halo and shows off several new mechanics, such as the grapple shot, which you can use to grab items or enemies.

The game itself is a semi-open world, and it is filled with numerous enemies to kill, squads to rescue, and places to explore.

You can also find unique collectibles in the world, including audio logs that help flesh out the story further, something the previous games didn’t offer.

Players can also dive into the free-to-play multiplayer, which offers modes like capture the flag, and deathmatch, making it one of the best multiplayer games of all time in terms of accessibility and replayability.

Halo Infinite is a fresh take on a franchise that has been around since Halo Combat Evolved, which was released in 2001 and has definitely helped revitalize the series.

Having taken home the Player’s Voice Award at the 2021 Game Awards, this is one game you won’t want to miss if you are a fan of the originals, and it is available right now on Game Pass!

Xbox Game Studios has released many great games for the Xbox Series X that really help demonstrate just how great next-gen gaming is.

While there are many amazing Xbox exclusives to download and play, these 10 are the ones that you absolutely shouldn’t sleep on.

Each one offers something unique and entertaining, and they are all incredibly addicting once you start playing them.