Rome is NOT the best Civ in the game, but this is still our recommendation for the reasons outlined below. For a comprehensive list of the best Civs, check out our Civ 6 Tier List by clicking here. However, we suggest going down that road once you’ve got the fundamentals down with Rome.

As a new player I also recommend that you ignore wonders for your first few games. While there are good wonders in 6 they are often not worth the cost vs. other things you could be building and are tricky to plan the placement of. They are really not necessary for a win in civ 6.

Your Build Order after your Capital is Settled

So after your starting build order there are a few other things you want to focus on. In that second city you settled you want to build a monument immediately for the culture and in each city you settle you usually want to build the monument first. Culture in the early game is more important than science because you want to get your first government unlocked for more policy cards. The other thing you want to do is build a starting defensive army. From craftsmanship you got the agoge card which you want to put in once you get it so that you can quickly build 4 warriors and 4 slingers/archers, this is a solid starting army to fend off barbarians, deter other civs and to escort your settlers. If you are planning on going on the offensive early game you may want more units, but this is plenty to start.

The next thing you are aiming for is political philosophy to unlock your government. In the meantime there are a few things you can build: 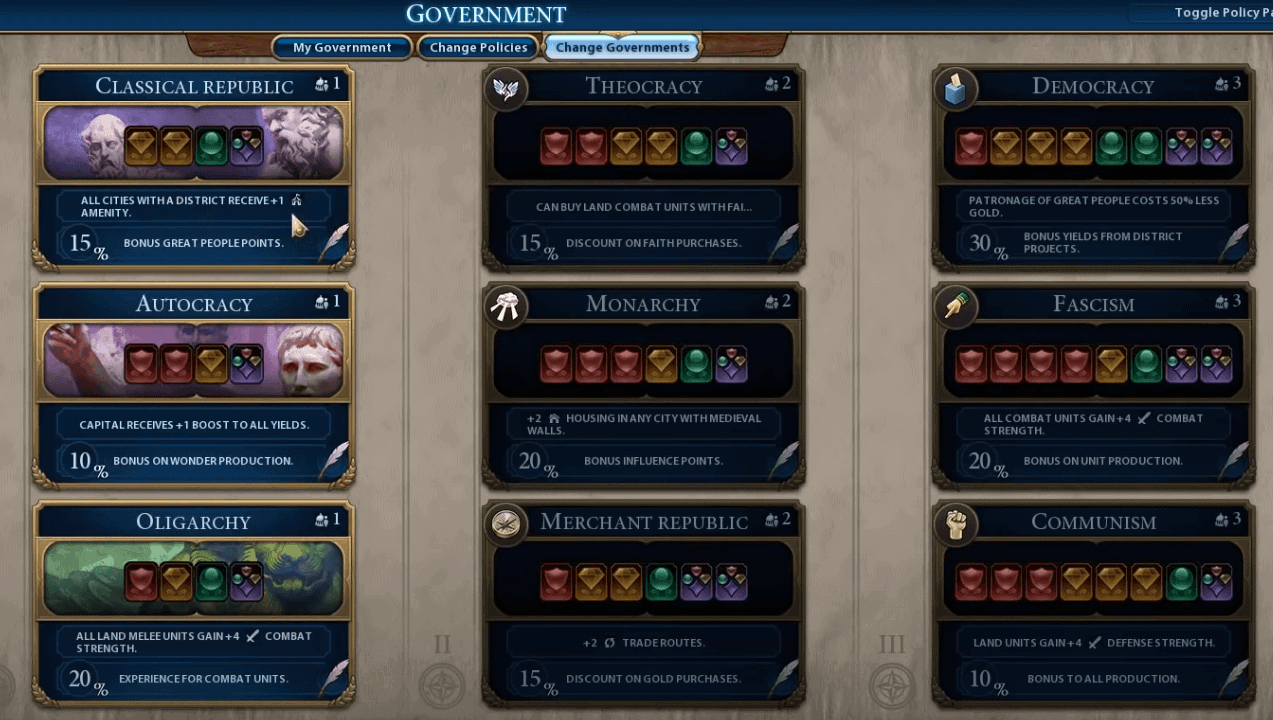 On your way to getting political philosophy you will get 3 governor promotions, 2 from civics and 1 from building the gov plaza. I always start with putting the first from the civics into Pingala and place him in the city that you did not build the gov plaza in. For the second from your civics I also place it into Pingala where you have the choice to get science or culture from population, you want to pick what you are lacking in the early game which is usually culture, but sometimes you may get lots of early culture from other sources and will want to choose science. The third point from the gov plaza depends on your plan for the game and if you will be doing any kind of early military or just expanding normally. If you are doing military then pick Victor as you will need him for the loyalty benefits and the free promotion. In most scenarios where you will just be expanding by building settlers then you want to take Magnus and put him in the city with your gov plaza.

Once you get to political philosophy and your gov you really have 2 choices, oligarchy or classical republic (autocracy is rarely worth it). If you will be doing any kind of war then chose oligarchy, but if not then choose classical republic. You also have the choice of building 1 of 3 buildings in your gov plaza and again there are really only 2 choices, the ancestral hall or the warlord’s throne. This is basically the same decision as when you picked a second governor so if you took Victor then build the warlord’s throne and if you took Magnus then build the ancestral hall. Building that will also give you another governor point which you will want to put into that second governor, for Victor take the one that gives +4 loyalty for cities in 9 tiles and for Magnus take the one that removes the population cost for building settlers.

You can also now put 4 cards in your gov. If you are going the military route then choose the ones that will get you gold and production. If you went classical republic the 1 card that you absolutely have to put in is colonization which makes settlers 50% cheaper because this is when you will be doing all your expanding. Once that’s in your city with the ancestral hall and Magnus will be doing nothing but building settlers, since you now you can build settlers twice as fast in that city, until you have enough for 8 cities. As a new player I recommend aiming for at least 6-8 cities, but ideally you want 8-12 cities. Also you want to make sure you are settling cities on fresh water or coast and place your cities 4 to 5 tiles apart from each other to maximize the amount you can place and so cities and districts can benefit from each other.

So as you are placing all your cities you need to start focusing on your infrastructure, mainly your districts, but also your tile improvements. Its easy to get distracted by building districts and buildings, but its almost always better to improve your tiles first to increase your production so that everything else you build is faster. That being said the districts are the most important aspect of your city in the long run as they give you most of your economy yields (faith, gold, science, culture). Generally all of your cities are going to have 3 core districts based on the win condition your are going for, which means you need at least 7 population in each city. A list of the core districts you want to focus on for each victory can be found in the districts per victory tab. As a new player I recommend aiming for science victory as its the most straightforward of the win types and in that case the districts you want to focus on are the campus, commercial hub/harbor, and the theater square. An important thing to note is that 7 population is really all you need to have a successful city, but 10 population is more what you want to aim for as it allows you to work most of your tiles and build a 4th district which will usually be an AOE district like the industrial zone or entertainment complex. So while the game will warn you that you are low on housing alot, if you have at least 11 housing in a city then it really isn’t worth building any housing districts (also as a side note never build neighborhoods).

Once you have your core districts placed you really just want to continue to improve your tiles with builders, build buildings in your districts and keep up with military production to make sure you don’t get surprised and overrun (you can check other player’s military strength in the victory screen or with the HUD ribbon). When choosing techs and civics look at what they provide and ask if it helps you with your victory. Often nothing currently available will help you but there is a tech 2 or 3 rows down that you really need. I always recommend opening the full tree when choosing what to research next so that you can see past the immediate options to see what you really need.

Beyond that you just want to focus on what gets you the win condition and if there is nothing available to build that you really need don’t be afraid to run district projects instead.

Once You’ve Got All That

While this guide was written with Rome in mind, many of the lessons are applicable to any Civilization. Once you are ready to try out something different, be sure to check out our Civ 6 Tier list, which will outline the pros and cons of all of the other Civs. That list sorts the Civs by different win conditions, so you will know which is the best overall regardless of your playstyle. As a bonus, it also highlights the best wonders, natural wonders, pantheons, and all different elements of religion. Game on!