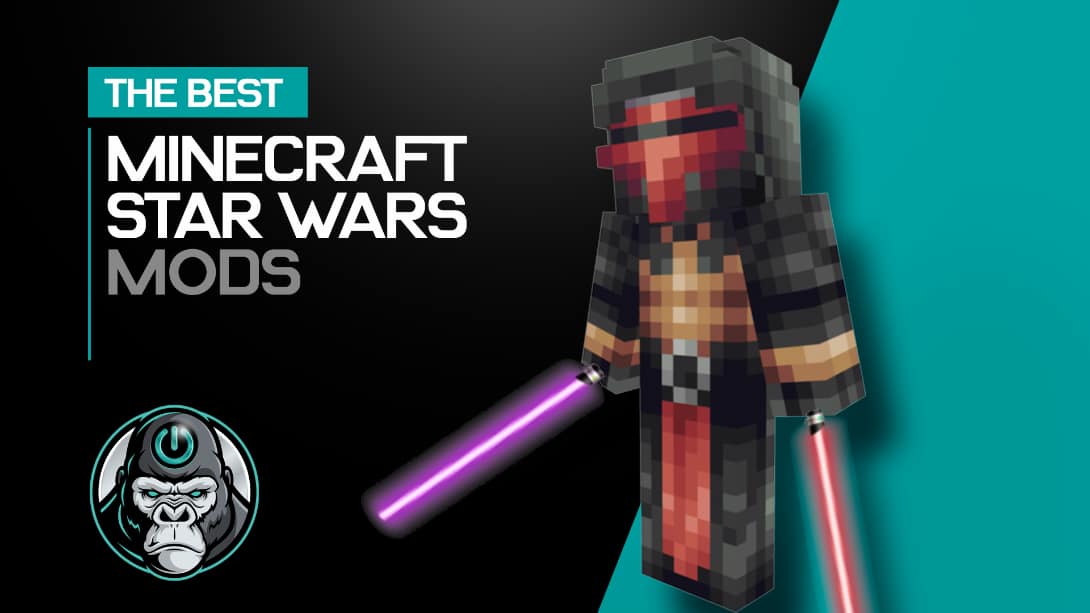 What are the best Minecraft Star Wars Mods?

If you’re looking to turn Minecraft into your own personal Star Wars world, look no further. The best Minecraft Star Wars mods are here and can help you create a world that closely resembles KOTOR (or any other preferred destination).

From adding new lightsabers to your inventory to incorporating new blocks and textures, there are plenty of Star Wars mod options for all in Minecraft.

We’ve gathered a list of the best Star Wars mods for Minecraft by comparing the purpose and popularity of various mods available.

Here’s our list of the 10 best Minecraft Star Wars Mods: 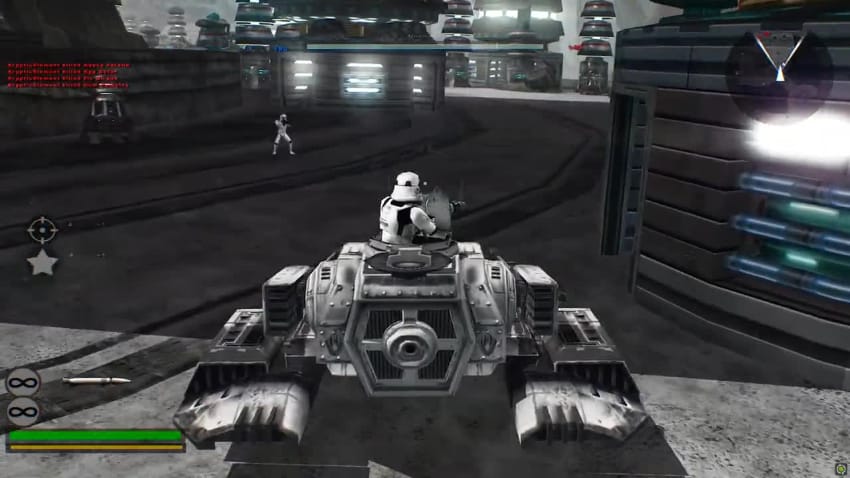 If you’re looking for a Star Wars mod that delivers lightsabers and mobs, Kryptic’s Star Wars might be for you.

Both Jedi and Sith are added to the game with this mod, along with the ability to build your very own lightsaber.

The customization in this mod is pretty limited, but it does offer the ability to build content that reflects Star Wars while immersing yourself in the fandom. 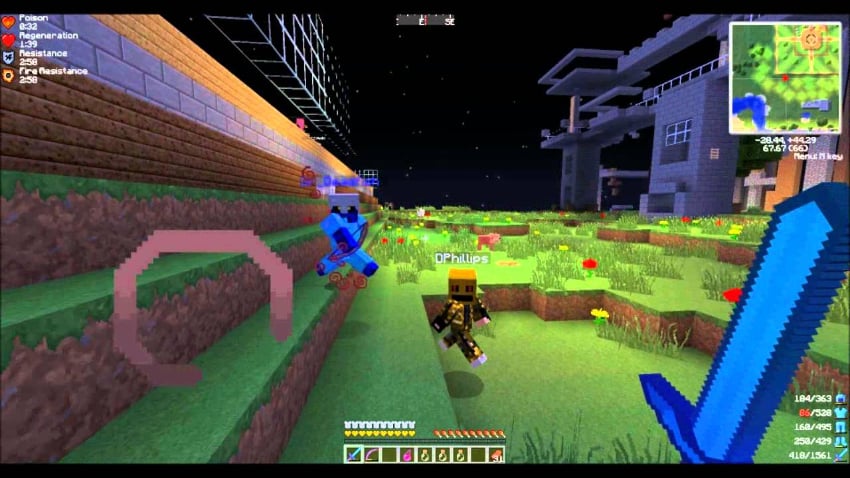 Wandercraft is a relevant mod for those who love lightsabers, Lord of the Rings, and x-wings.

If you want to pilot an x-wing, explore brand new items and mobs, or even immerse yourself in a Star Wars/LOTR realm of your own, you can do so with Wandercraft.

Combining some of the most popular video games right now with global franchises, this mod is highly satisfying.

Some of the features that come with the mod include more than ten new weapons, four in-game mobs to fight, and world-generation modifications such as brand new Easter eggs.

One of the most exciting additions to this mod may be the X-wing, which players can pilot. 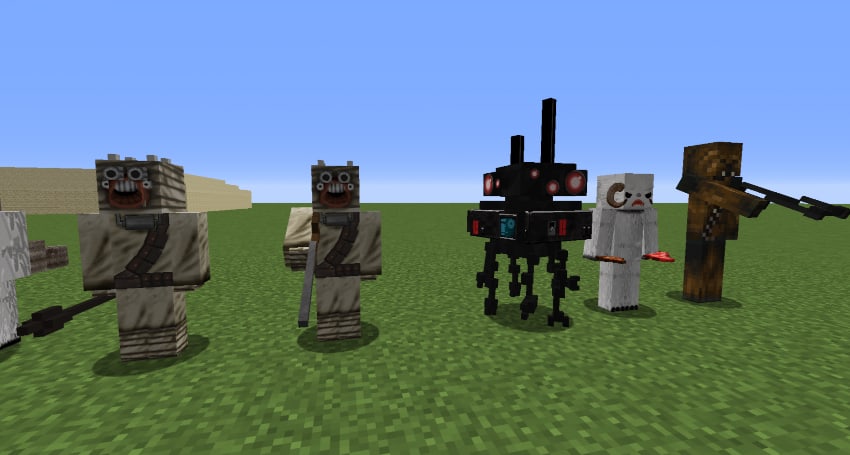 If you love the idea of a truly immersive Star Wars mod that allows for roleplaying and plenty of imagination, look no further than Imagine SW.

For players who want to transform their Minecraft world into Star Wars without losing the genuine feel and aesthetic that Minecraft has to offer, don’t skip this one. 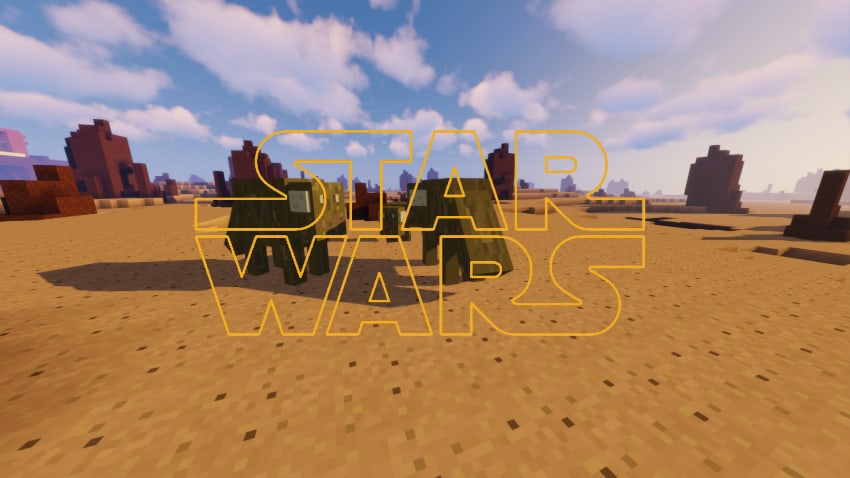 For players who want a truly immersive mod and reflective of Star Wars lore, you can find everything you need with this all-in-one mod.

The Skywalker Saga Mod features a complete story that requires the player to choose either a Jedi or Sith destiny at the start of their game.

Throughout the game, more than 90+ mobs become present, including both Luke Skywalker and Darth Vader.

In addition to traditional mobs and lightsabers, vehicles are also included.

Players who really want to take their Minecraft game to the next level cannot miss this one, especially with six brand new planets to travel to and explore.

The most notable and unforgettable features of the Skywalker Saga Mod for Minecraft include over 90 new mobs and brand new vehicles to drive around in.

More than 20+ 3D weapons such as blasters and lightsabers are also included. But that’s not all.

With this mod, it is now possible to explore six brand new planets, including Tatooine and Dagobah, providing a truly immersive experience. 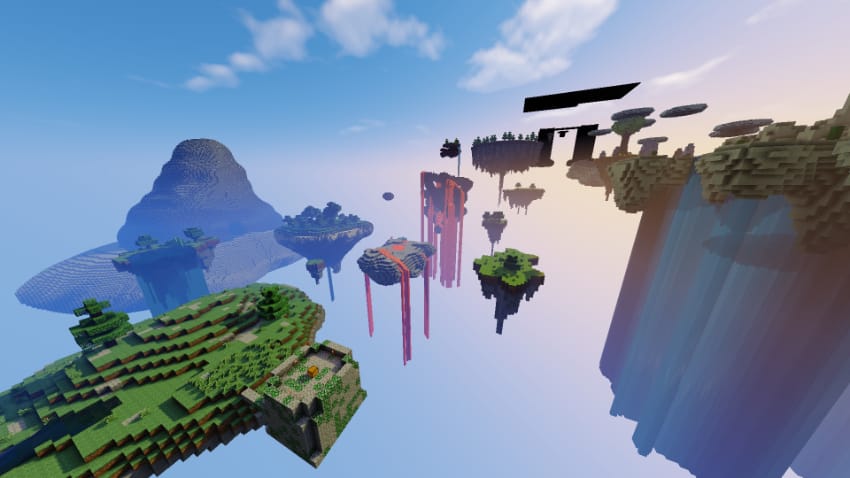 Starfall is one of our favorite Star Wars-themed mods in this post to download for those who enjoy building new content of their own in-game. It also reminds us why Minecraft is still one of the most popular video games of all time.

If you want to build your own Star Wars-themed game build complete with vehicles, lightsabers, and themed items or walls, you can do so with the Starfall mod pack.

This mod comes complete with plenty of stuff, including entire sets of blocks that resemble the Star Wars aesthetic and theme.

With this set that is free to download, you can add a variety of advanced flooring patterns and various light panels that are commonly found throughout the galaxy.

For players who enjoy making Minecraft a game that is truly their own, this one’s for you. 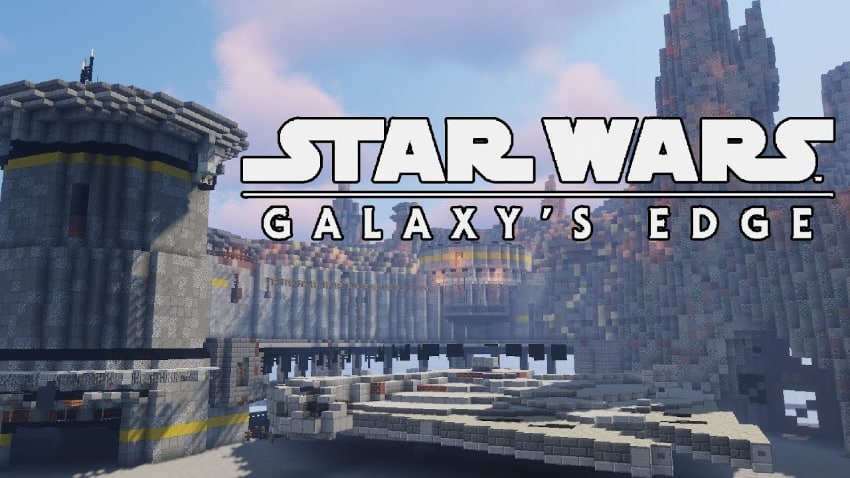 For those who enjoy a mod that is not too complex, robust, or big, but still gets the job done, Star Wars – Galaxy’s Edge is a great mod that stands out amongst the rest.

In the mod, players can enjoy new themed content and a modular lightsaber system. Combine components to create your own lightsaber while also finding and building lightsabers with different models for a truly unique outcome.

Search for kyber crystals underground to help color and power your lightsaber, adding to the immersive appeal of the mod.

Some of the features that stand out with this mod include entire armies of droids, space travel, additional lightsaber models, and the ability to dig for and collect kyber crystals to build lightsabers in-game. 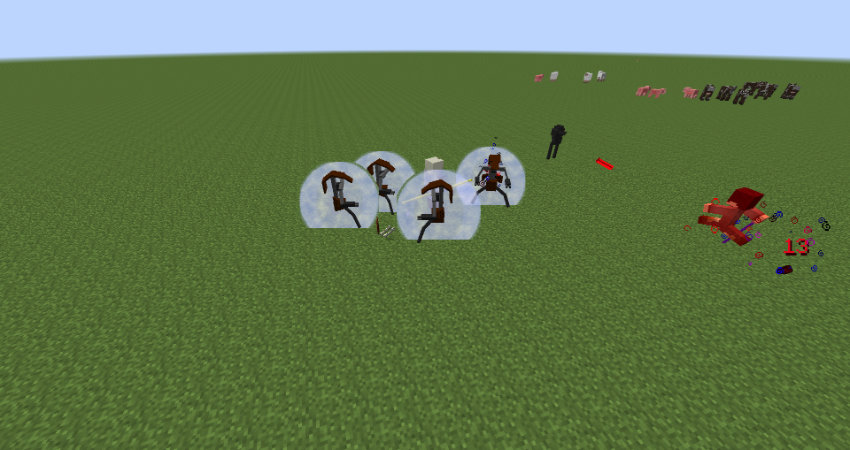 If you’re a fan of Clone Wars and want to bring it to life, look no further than A Clone Wars Survival Mod. This mod is our favorite survival mod in this post and on our site currently.

If you are looking for the ultimate survival mode for your game, this is exactly what you need.

The mod itself introduces Jedi, Sith, as well as Separatists into any Minecraft game.

If you want to orchestrate your own battle or bring your game to life with battles that mimic those of Anakin Skywalker and Ahsoka Tano, you can do so with this Clone Wars mod.

This mod is based on actual battles and includes events such as Clones marching, Magnaguards guarding, and even droid attacks.

For players who cannot get enough of Clone Wars and want to add a bit of a realistic storyline to their own game, you have to give A Clone Wars Survival ago.

Some of the features that come with the mod include marching clones, Magnaguards guarding, destroyers, droid attacks, and B2-RP battle droids.

If you love seeking out the games with the toughest video game bosses of all time, you will surely love survival mode in Minecraft. 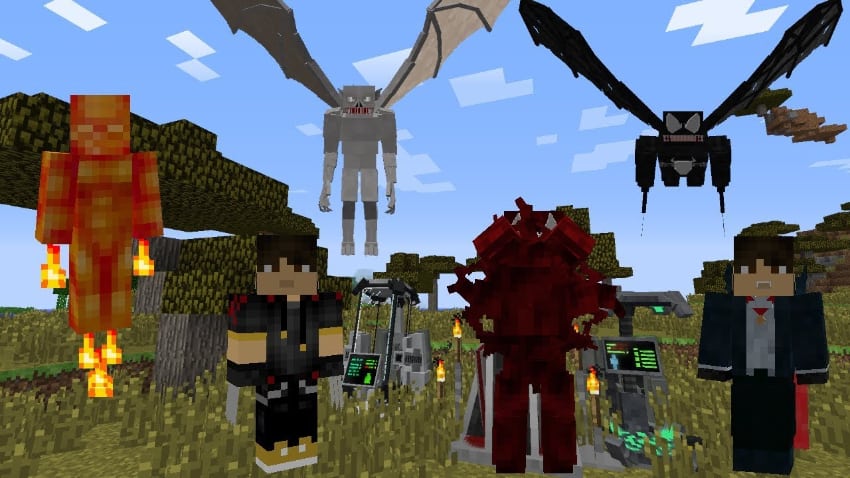 The Legends Mod is not classically from the movie or franchise, but it is a mod that provides players the ability to build lightsabers while immersing themselves in a themed world that offers plenty of things to participate in and enjoy.

The Mod not only features items and themes from Star Wars but also features plenty of packs and characters from Godzilla and Superheroes Unlimited for players who enjoy dressing up as their favorite superhero legends.

If you want to spruce up your game without going overboard with the theme, Legends may be the perfect mod to download and add.

This mod features plenty of themed items and objects, new lightsabers, theme characters from Godzilla and the horror genre to superhero characters that we all know and love. 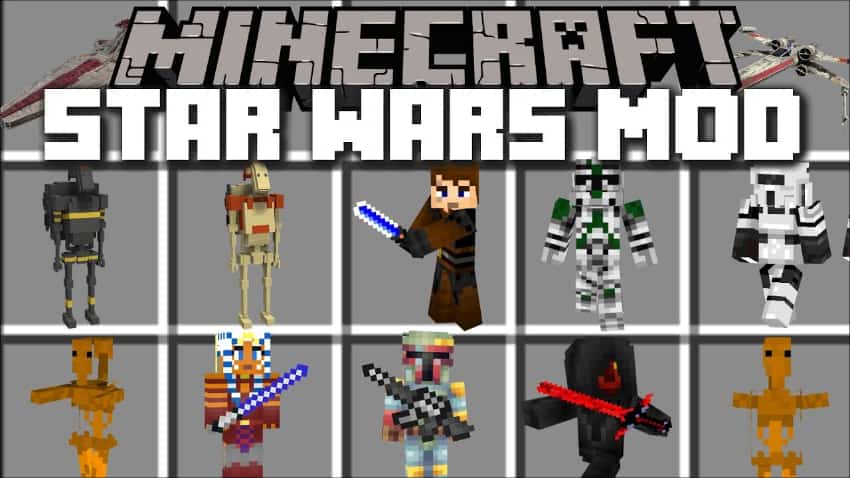 As with many of the mods that offer lightsabers, this one is no different. Star Wars in MC includes atmosphere add-ons from the ability to create your lightsaber to building skills and abilities based on your own in-game goals.

With this mod, you can explore new game modes of battle that mimic living the adventurous life of a Jedi. Explore a new shuttle, named T6, which allows players to travel together with friends or to mobs over vast distances.

Some of the features of this mod include the ability to create your very own lightsaber, study and acquire abilities, and even play with R2D2 in your virtual adventure.

This mod reminds us that it is possible to create the best fighting games with the proper mods and a creative mindset. 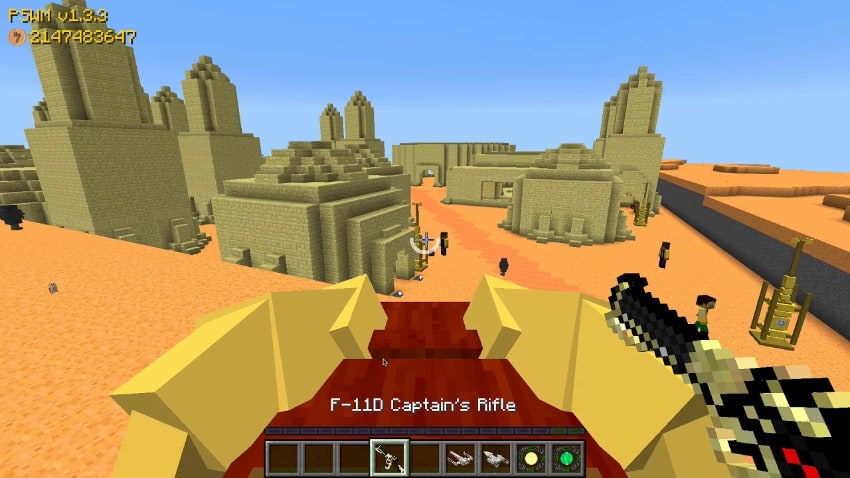 For the true Star Wars fans, Parzi’s Star Wars mod cannot be underestimated or overlooked. This is one of the best Minecraft mods to download for anyone who truly loves lore and immersion in Minecraft.

Not only does Parzi’s mod introduce brand new items such as Kylo Ren’s lightsaber along with plenty of weapons and toys to keep players busy, but it also provides players with the ability to travel to brand new planets or even to an entirely foreign galaxy. Yes, we said planets and galaxies.

If you want to visit Endor or chat with droids, you can do so by immersing yourself in one of the most popular themed mods for Star Wars available.

We hope you enjoyed our list of the 10 best Minecraft Star Wars mods.

From creating your own lightsabers and weapons to exploring brand new planets, realms, and Star Wars-themed build items, the right mods can transform any Minecraft realm into a Star Wars dream come true.

What’s the best Minecraft Star Wars Mod, in your opinion? Leave a comment below.