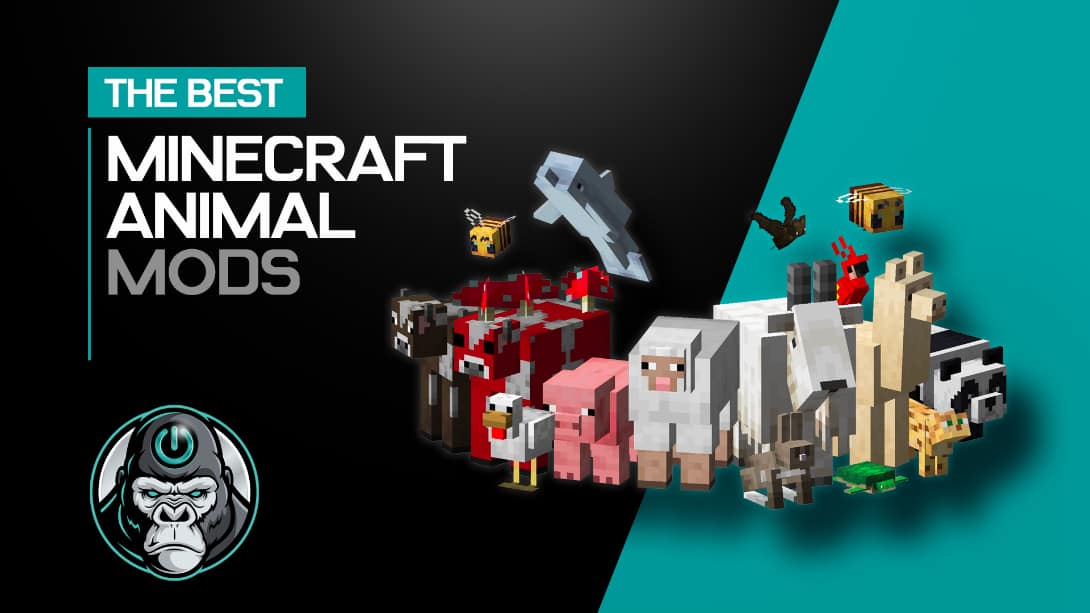 What are the best Minecraft animal Mods?

Minecraft is one of the most popular open-world simulation games played today.

For those who love mods and want to discover new animals and ways to integrate in-game mobs and individual animals into your own game, we’ve got you covered with the best animal mods to date.

We’ve compiled a list of the best animal mods in the Minecraft world that offer everything from craftable creatures to the ability to add new animals and in-game mobs to your map in real-time.

Here’s our list of the 10 best Minecraft animal Mods: 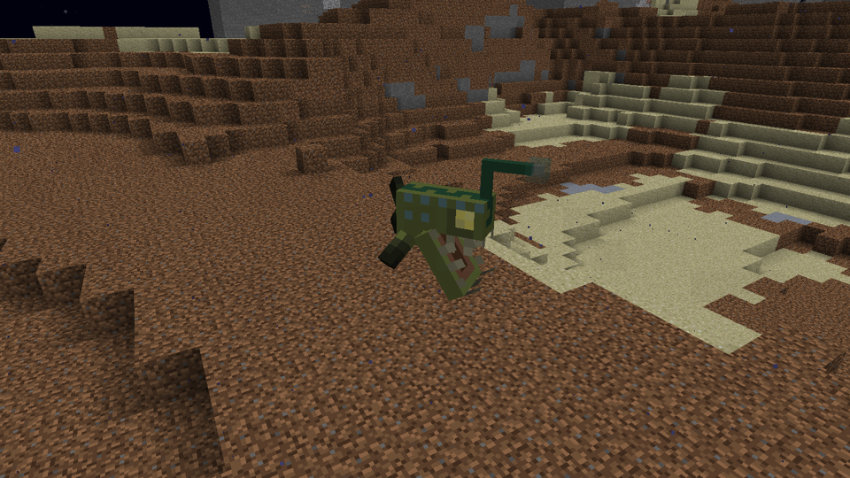 For Minecraft players in search of a unique mod with more features and new creatures, Quintessential Creatures is just what you need.

This mod is an extremely unique Minecraft mod that offers new ocean creatures such as sea serpents, angler fish, and even octopuses.

In addition to realistic moving octopuses and fish, there are squids that spray ink and even tortoises you can find on dry land.

If you require additional inventory space, lure a tortoise by feeding them flowers.

Once the tortoise is near you, you can rest an inventory chest on top of it, providing you with the ability to offload some of your inventory.

If you love exploring the depths of the ocean and want to help bring your ocean-atmosphere build to life, this is one mod pack that shouldn’t be skipped.

This mod is difficult to find on the official website, but older versions are available throughout the Minecraft community. 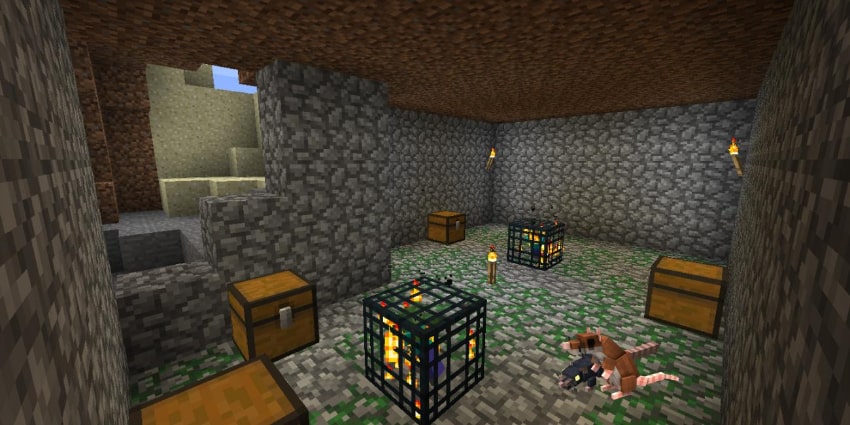 Do you love animal mods with unique features? How do you feel about rats? One of the most unique animal mods in Minecraft has to be Rats.

This mod is exactly what it sounds like, a mod designed to introduce virtual rats into any Minecraft realm.

However, what sets this mod apart from the base game and traditional animals is its robust and complex in-world system that allows for seriously unique mechanics.

Not only does the mod offer new animals, but the rats included in the mod have their very own AI and built-in ecosystem.

The in-game rats spawn similarly to Minecraft monsters and can quickly become an in-game nuisance by destroying crops, stealing seeds from chests, and even taking food directly from farmland.

If you want to make the most out of your newfound rat collection, you can do so by taming them, similar to other animals in the game, which is pretty cool.

Taming rats provides the ability to command your rats to complete an array of tasks, such as fetching items or transporting goods.

Some of the rat commands that can be executed once you have tamed your rat(s) include ordering a rat to wander the map, follow you, stay in position, or even transport items.

You can also train your rats to learn to harvest and gather items, providing the opportunity to create a sustainable farm. If you are so inclined, it is also possible to train rats to hunt hostile and small animal mobs on command.

With robust mods such as Rats, is it any wonder that Minecraft is one of the most popular video games of all time? 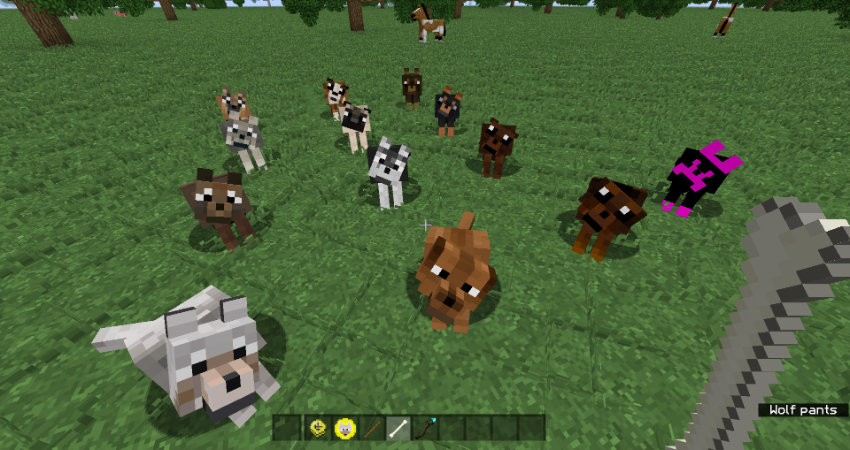 For dog lovers, Doggy Talents is a must-have add-on. This mod allows players to create pets using a plethora of customization options and in-game wolves to create adorable pups.

Each dog you create using the mod provides the ability to customize individual dogs with their very own leashes and collars.

And, the mod doesn’t stop there. Doggy Talents also allows players to train their newly customized pets to learn how to fetch and hunt a variety of in-game items. 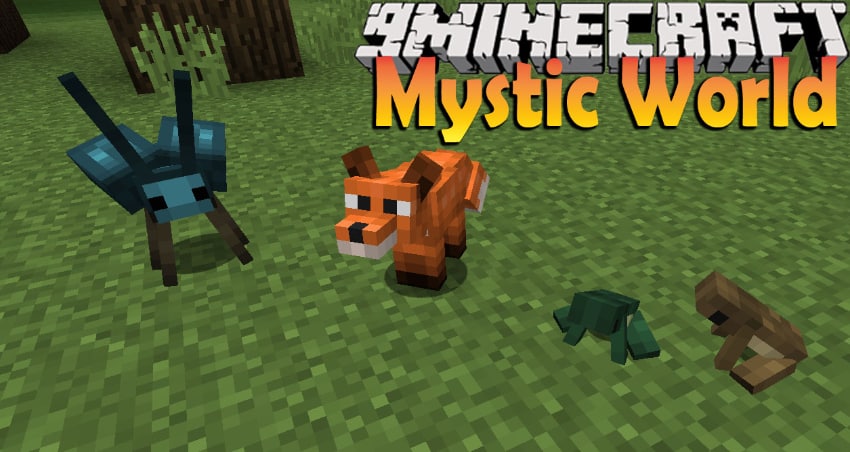 One of the best animal mods for Minecraft today is Mystical World.

This mod is a wild animals mod that provides better animals and new creatures that help create an atmospheric experience.

The mod includes new animals such as frogs, beetles, deer, silkworms, and even real-life owls.

With this one, not only will you immediately gain access to incredible realistic animals, but you will also have the ability to tame animals.

One of the most popular tameable animals that comes with the Mystical World mod pack is the lava cat, exclusively available only in the Nether. 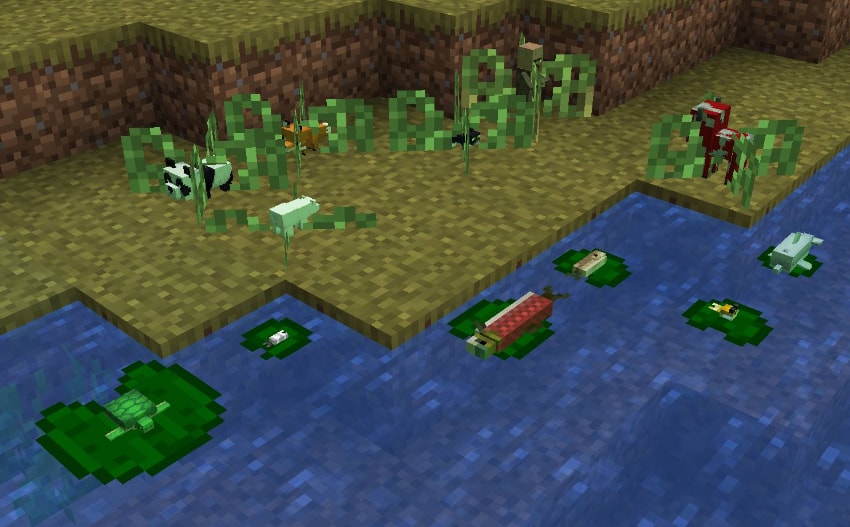 If you want even more animals than any mod on this list has to offer, let us introduce Animal Crops. This is a robust mod that allows players to essentially grow their own animals and mobs using a crop and farming system.

For those who have played one of the best Gamecube games of all time, such as Animal Crossing, then you won’t want to miss this mod.

Rather than searching high and low for your favorite animal mobs, you can now learn to grow them just about anywhere.

You will no longer need to lead the animals you wish to tame back to your farm with the ability to grow them right in front of your own eyes.

And yes, it’s even possible to gain access to rare animals such as Mooshrooms and Polar Bears right out of the gate with this fan-favorite mod. 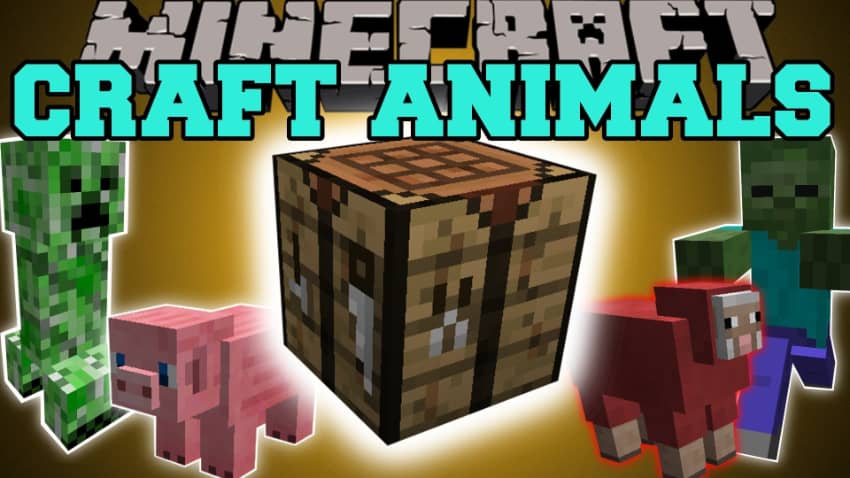 For players who are tired of trekking long distances in Minecraft just to transport a mob or simply want to spawn mobs to fight with friends, Craftable Animals is an awesome mod.

This mod provides players with the ability to craft their own mobs using a wide range of materials found throughout the world.

Although it’s no Red Dead Redemption 2, the mod does allow players to create the battle world of their dreams in Minecraft with the use of mobs.

Whether you’re a prankster who is ready to unleash random mobs on your friends or if you are creating a warzone, using the Craftable Animals mod is a must. 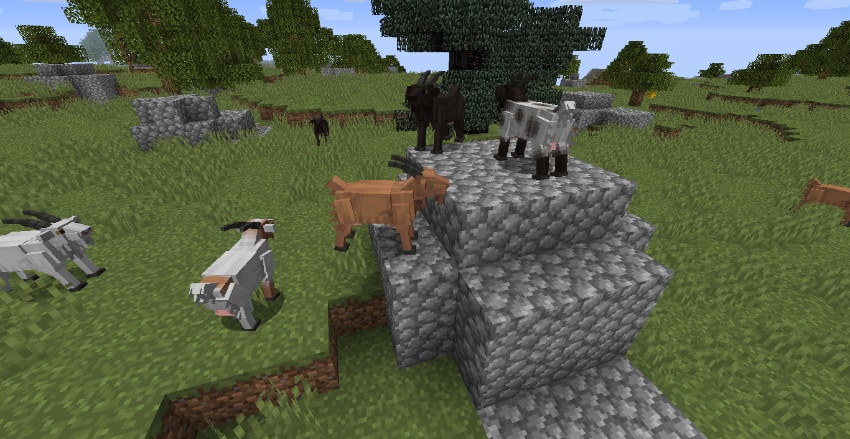 For those who can’t seem to get enough animal packs and want even more with multiple realistic colors to choose from, Better Animals Plus is a mod that absolutely delivers.

While it is a simple mod, it is extremely useful and adds so much to the game in a realistic way.

The mod itself includes 40 new creatures ranging from butterflies to squid, spread across all of the base game’s already-included biomes.

If you’re tired of the same animals that are included in the base game or if you simply want your environment to feel a bit more “real,” don’t scroll past this one.

In addition to the 40 new creatures included, Better Animals Plus also includes new armor and a variety of new blocks to work with both decorative and living animals in the pack. 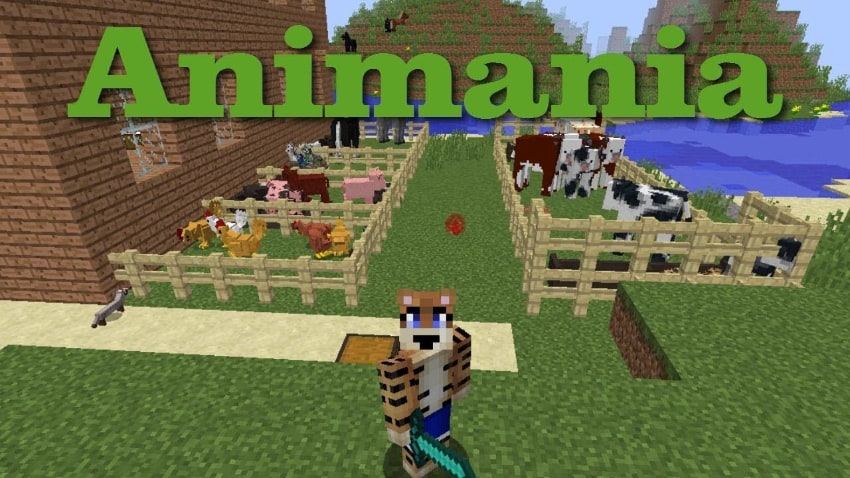 If you have a soft spot for the farm animals already included in the base game of Minecraft and you are interested in more nature exploration and nurturing, check into Animania.

This mod helps improve everyone’s favorite animals already available in the game with brand new textures and, in some cases, even new variations of existing animals.

With Animania, players will not only experience brand new updated textures for existing animals in the game but new mechanics have also been added.

Using the mod, players will now be responsible for feeding and providing water to individual animals, adding a touch of realism to those who want to own or just love farm life in general.

This one is great for anyone who enjoys animals in-game and wants to make them feel a bit more real. It’s mods like these that remind us why Minecraft is one of the world’s most popular video games right now. 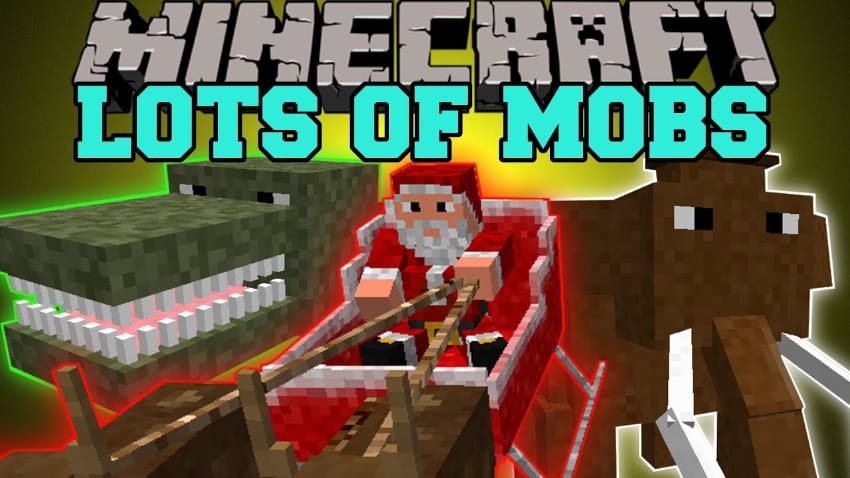 If you love finding yourself in fights and battles while playing Minecraft, don’t miss LotsOMobs.

With the mod, spawn brand new animals ranging from crabs and frogs to bears and boars that can be generated in every realm currently available.

New blocks and materials are also included in this mod pack, making it one of the robust offerings on our list.

If you’re a major fan of today’s best fighting games and can’t get enough of Minecraft battles, check out LotsOMobs. 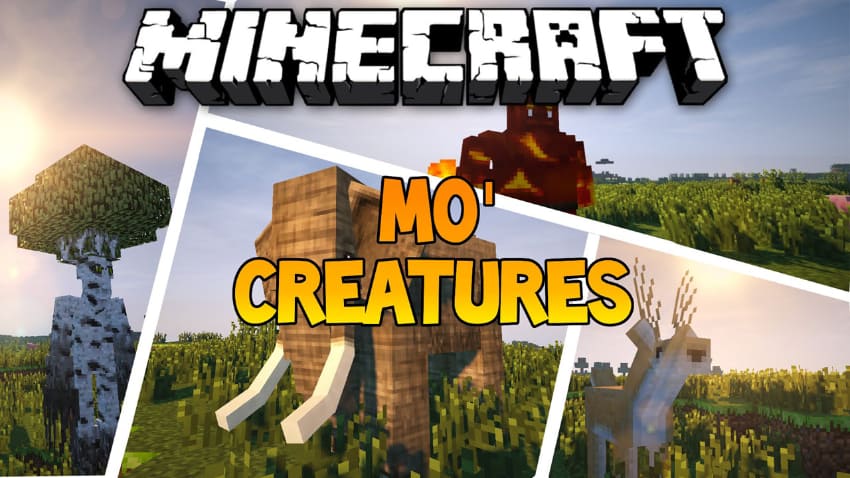 We couldn’t consider this list of the best animal mods without mentioning Mo’Creatures. This is one of the longest-lasting creature mods that offer a mix of brand new animals in the game.

Some of the animals included in the mod are cats, dogs, lions, tigers, bears, and various unique insects. If you are so inclined, it is also possible to tame creatures individually to build your very own one-of-a-kind farm.

In addition to adding standard animals to Minecraft, Mo’Creatures also features new game mechanics for fighting and defeating new enemies, including both ogres and werewolves.

We hope you enjoyed our list of the 10 best Minecraft animal mods.

From creating new enemies and enjoying a brand new mob spawner to owning pets and spawning animals such as chickens and pigs, there is no shortage of fun and realistic animal mods.

So, enjoy diving into the game with these new additions that are sure to bring your game to life.

Here’s a quick recap of the 10 best Minecraft Animal Mods:

If you enjoyed this article, check out our other mods lists below:

What’s the best Minecraft animal mod, in your opinion? Leave a comment below.

The 10 Rarest Shinies In Pokémon GO