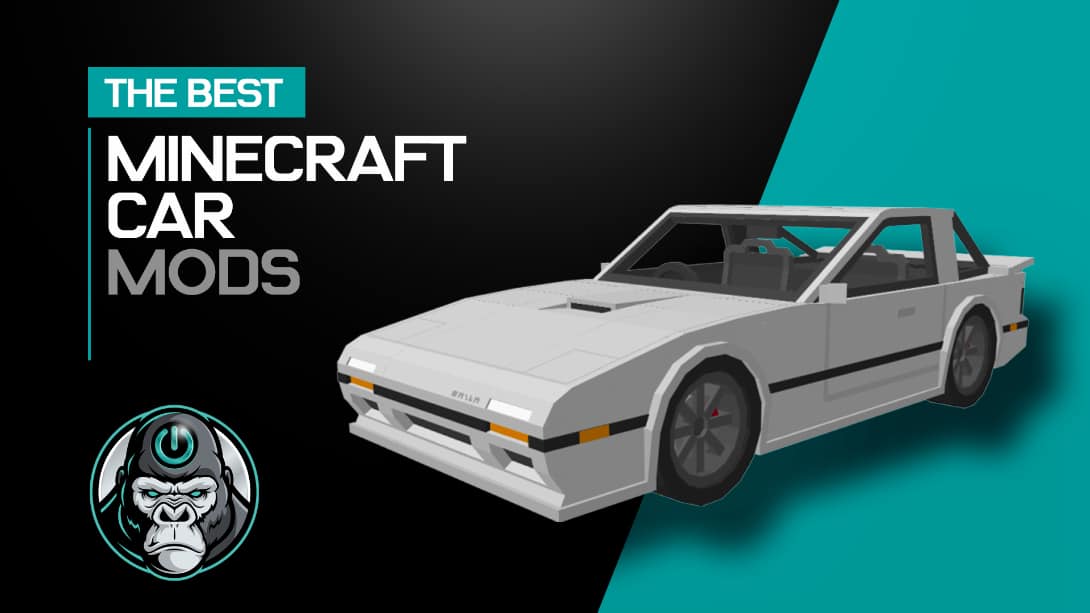 What are the best Minecraft car mods of all time?

Minecraft can provide a vast world filled with weapons, animals, furniture, and friends. However, there is a serious lack of vehicles and moving objects currently available in the base game.

If you’ve been missing out on the ability to drive or even build your own vehicles in Minecraft, we have the perfect list for you.

Some of the best Minecraft car mods offer realistic physics, weapons features, and even the ability to transport items from one location to the next.

The Best Minecraft Car Mods of All Time

We’ve scoured the best car mods for Minecraft to compile our list of favorites for those who want to customize vehicles, use helicopters in-game, or just have a bit of fun exploring with friends.

Here’s our list of the 10 best Minecraft car mods of all time: 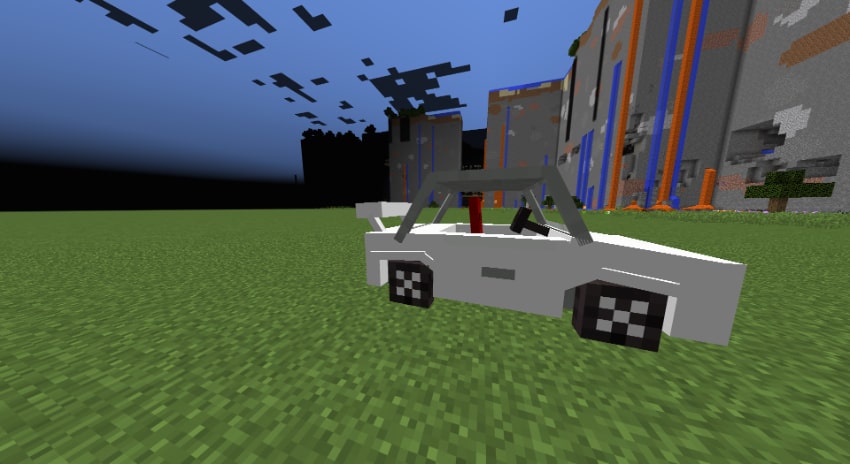 WMATM is a unique must-have mod for those who want the best vehicle mods for Minecraft. This mod comes with an entire catalog of traditional vehicles, but that’s not all.

In addition to classic block-style vehicles, this car mod also includes vehicles such as motorcycles, airplanes, and helicopters that can be used in-game.

In addition to the variety of cool vehicles that come with this pack, there are also plenty of fun features, including the ability to actually fly and maneuver airplanes.

You can even pilot your aircraft in survival mode and ride bikes or take motorcycles around your world, providing a more realistic experience in your Minecraft world.

This mod actually includes an in-game driver’s license system, requiring players to obtain a license before owning and operating vehicles, including classic cars and planes.

For the player who is not interested in a complex system but still enjoys a wide selection of Minecraft vehicles, WMATM Vehicles is the perfect mod. 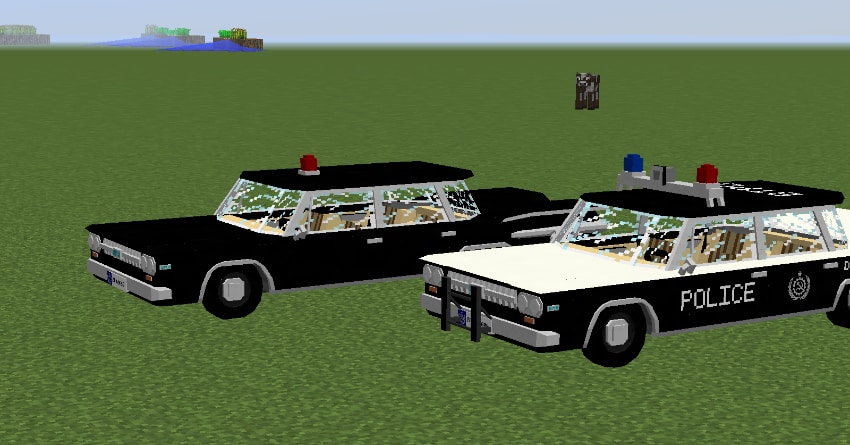 If you love military vehicles and want to explore a range of unique and fun creations, UNU Military Vehicles is one of the best add-ons for Minecraft.

This one includes a variety of jeeps and military-style trucks that come complete with weapons (in some cases).

In addition to standard military vehicles, this mod also comes complete with a large gun that can be utilized with alternate mods (including Immersive Railroading). 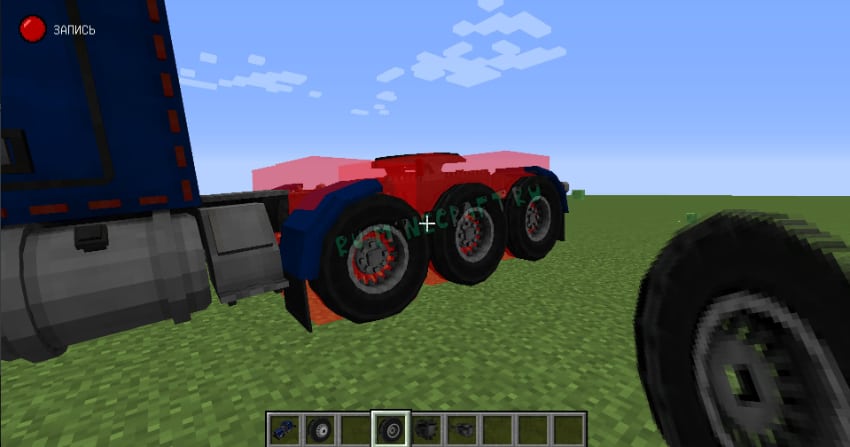 Do you ever wish there was a way you could implement more trucks, transport goods, or even incorporate semi and fuel trucks into your game? If so, the MTS Heavy Industrial Content pack may be just what you need.

Although it is no Need For Speed Heat, it does offer a way to enjoy vehicles without launching an entirely separate game.

This pack is pretty straightforward and offers the opportunity to build your own transport simulator with plenty of semi-trucks to choose from and manage.

In addition to brand new trucks, players also have the ability to build trucks from the ground up, using a variety of blocks to create the truck they truly desire.

Whether you want to create a truck or are excited about setting up custom controls and features within your semi-truck, this mod offers a great new way to play the game. 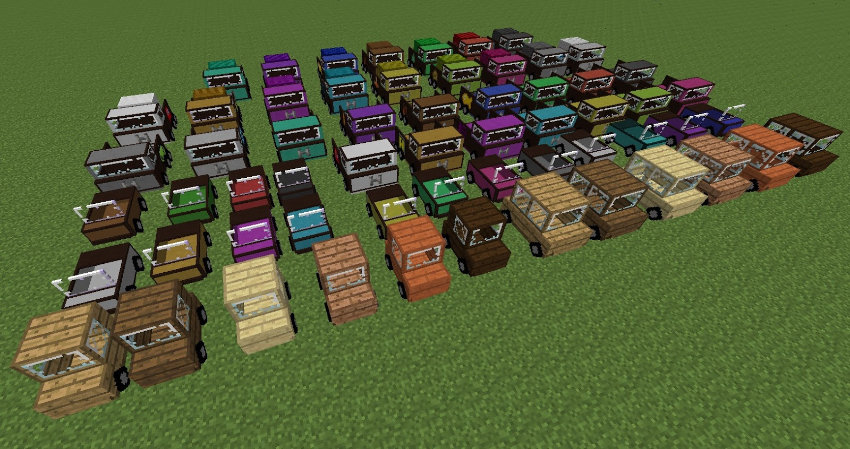 The Ultimate Car Mod is pretty much that. It offers the ultimate vehicle experience for those who want to test out a ride, race in competitive games with friends, or even create tons of unique cars from scratch to explore.

The mod not only includes the ability to craft your own cars, but it is also possible to add new roads, road signs, and other traffic-related features to help make your Minecraft world as realistic and functional as possible.

In addition to the road signs, traffic, and the ability to build your own cars, you will also require fuel to operate your in-game vehicles. Using the gas production system in this mod helps take your game to an entirely new level of fun.

While the Ultimate Car Mod won’t be landing on the best open world PS4 games list any time soon (as it is only compatible with the Java edition of Minecraft), it does offer an immersive open-world experience for those who love driving around in their worlds. 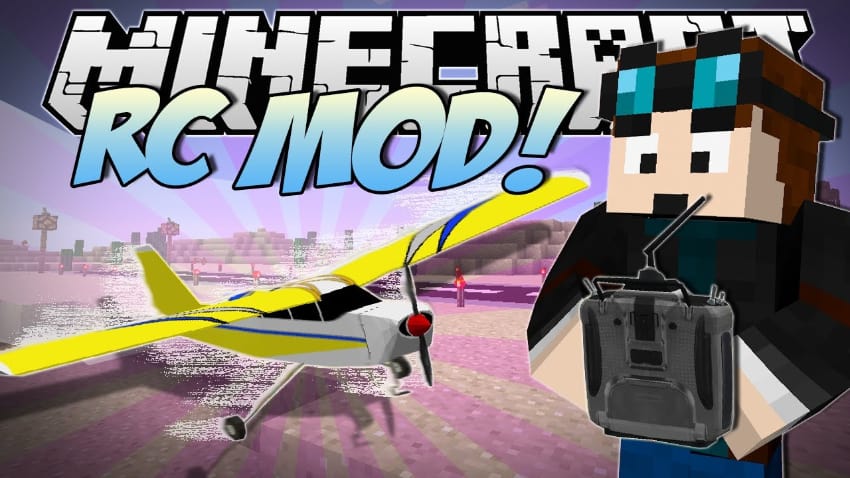 The RC Mod is an excellent mod that stands out among the rest, as it provides a unique opportunity to build and control your very own remote vehicle in-game.

Rather than building and controlling your own cars, this mod focuses on building smaller vehicles that can be piloted and controlled by players.

One of the features that stand out with the mod includes the ability to control various RC vehicles,  which makes this mod different than standard vehicle mods.

Using this mod provides access to both RC vehicles and air vehicles. You can also view your RC vehicle in first-person, allowing for a great opportunity to battle with or spy on friends.

For Minecraft players seeking a new and unique experience unmatched by any other mod, check out The RC Mod. 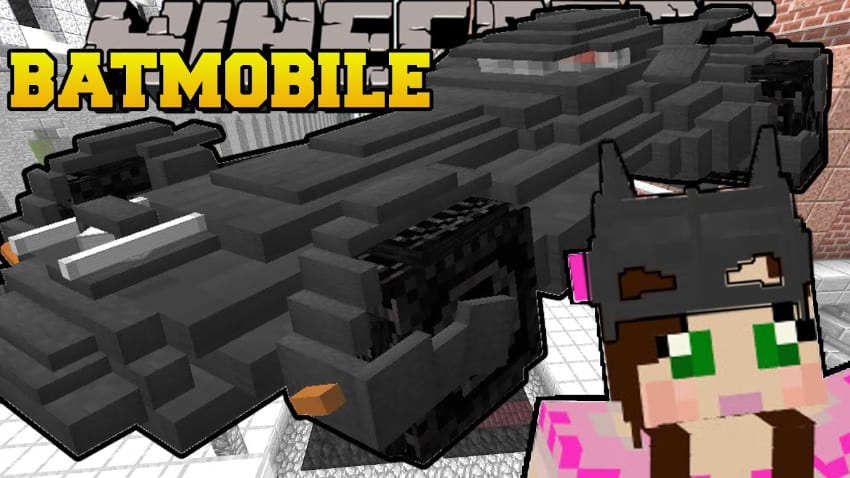 If you’re a fan of Batman and looking for mods that can help bring your Gotham City aesthetic to life, check out the Bat Vehicles mod.

This mod offers exactly what its name entails; Batmobile sports cars and Batman-themed goodies, perfect mods for any collection.

The mod currently includes a 1966 Batcycle, a 1989 Batmobile, a Bat-Pod, a Bat-Bot, and a Batmobile Tumbler. 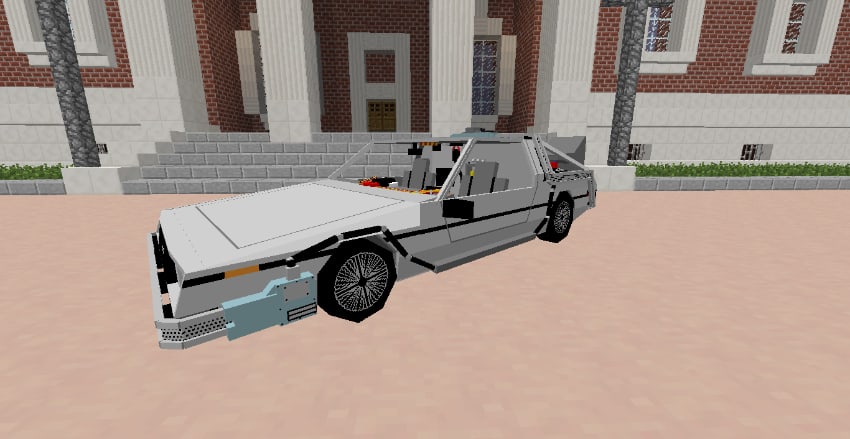 Along the same lines as the Bat Vehicles mod, the Iconic Movies Vehicles mod also offers many brand new iconic vehicles that are unforgettable in pop culture.

From the classic DeLorean to Ghostbuster’s ECTO 1, this pack is absolutely a must-have for true car enthusiasts.

Oh, we can’t forget about Ferris Bueller’s Day Off’s 61′ Ferrari GT California, which is also a feature vehicle in this mod, available completely free of charge.

Whether you love defeating the toughest video game bosses of all time or if you enjoy the story of your favorite protagonist, this mod is one to remember.

If you’re a serious movie buff or if you’re obsessed with collecting as many vehicles as possible, don’t miss out on this mod! 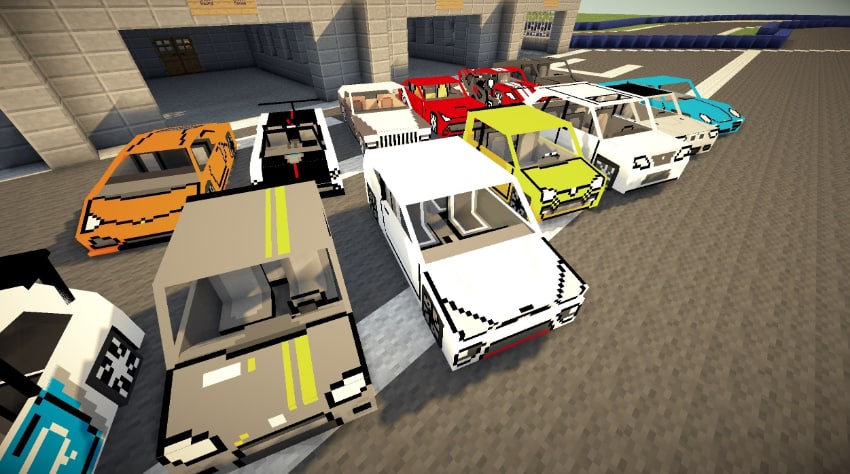 For Minecraft players who love their game being filled with tons of new features and immersive activities at all times, Fex’s Vehicle and Transportation Mod may be the right mod for you.

This mod is a base mod for players interested in adding a range of vehicles to their games, from classic cars and trucks to planes and transport semis.

It is important to note that this mod does not include actual vehicles and serves as a base mod for additions such as vehicles, driving mechanics, and gas/production systems.

Some of the most notable features in the mod include the ability to implement and control land, air, and even sea vehicles. You can also utilize the integrated and robust rail system with its own unique rail system.

With the extensive features that this mod has to offer, it is one of our favorite mods for Minecraft, especially when it comes to vehicles.

Felix’s Vehicle and Transportation Mod reminds us why Minecraft is so beloved and why it is one of the most popular video games right now. 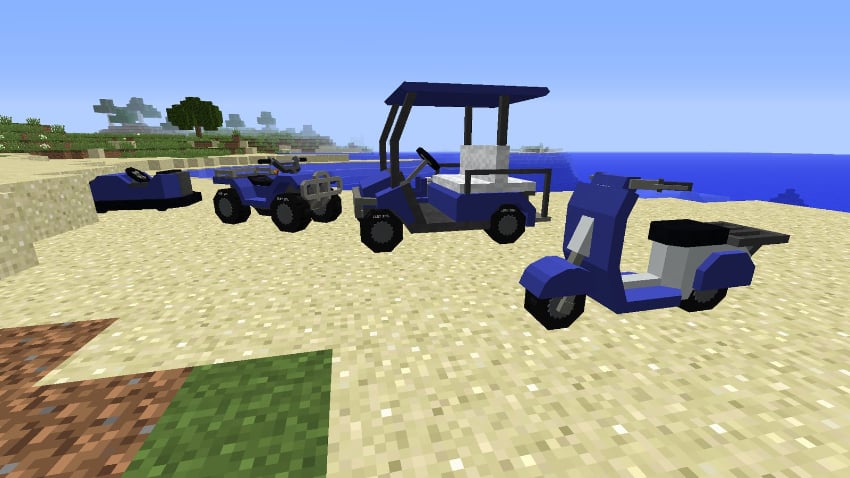 Mr. Crayfish’s Vehicle Mod for Minecraft is another of our favorite car mods and arguably one of the best Minecraft mods to download for vehicle lovers.

Similar to his other mods, this one comes equipped with 20 brand-new vehicles along with a complete customization system.

The customization system included with this mod allows players to customize everything on their new vehicle, such as adding different wheels, choosing unique engines, and even selecting colors.

Unlike other mods that provide vehicles, this mod offers a robust workshop for an even more immersive and interactive experience.

It is also possible to engage with fuel production, as fuel is required to power vehicles with this car’s mod.

With so much to do, it is no surprise that Mr. Crayfish’s Vehicle mod is one of the most popular mods available for those who love realistic gaming experiences. 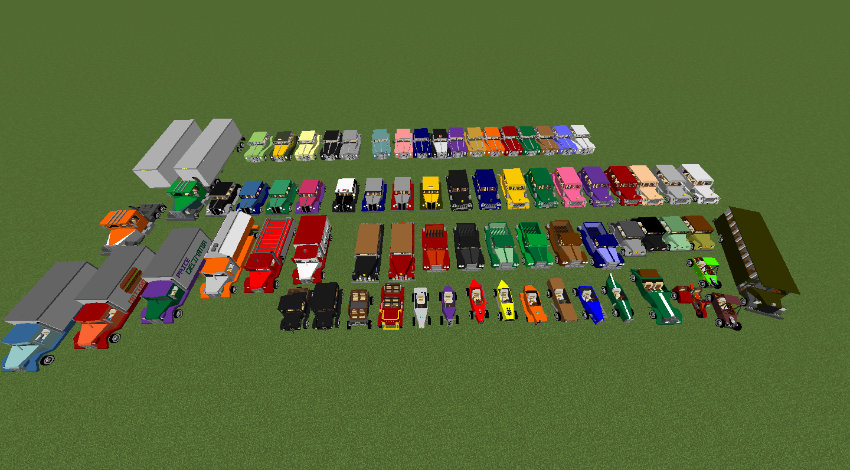 One of the most popular vehicle mods for Minecraft is Immersive Vehicles. This mod adds a massive pack of vehicle items and plenty of cool and fun features that are hard to remove once installed.

Once installed, players are not only introduced to an entirely new vehicle collection, but they can also play with the pack while enjoying realistic physics.

In addition to realistic physics, Immersive Vehicles also offer joystick support. If realism is important to you or if you are in the process of creating a world in Minecraft that is truly reflective of the physics in real life, check this one out.

With so many high-res textures and real-life physics, we know why Minecraft once again tops the most popular video games of all time list.

For players interested in adding texture packs, additional mechanics, and resource packs, this mod is highly compatible, which is why it tops our car mod list.

We hope you enjoyed our list of the 10 best Minecraft car mods of all time.

Whether you want to create your own transport simulator, race your friends, or build a vehicle from scratch with weapons, you can do so with the best car mods for Minecraft available today.

Here’s a quick recap of the 10 best Minecraft car mods of all time:

If you enjoyed this article, check out our other mods lists below:

What’s the best Minecraft car mod, in your opinion? Leave a comment below.

The 25 Best Dog Pokémon of All Time